Learn To Fly In South Kensington 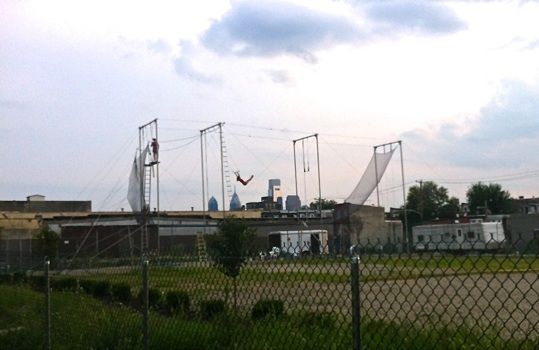 Fly School Circus Arts
, which trains people to use a flying trapeze, has found a warm weather home in Philadelphia on a vacant lot at Fifth Street and Cecil B. Moore Avenue in South Kensington. A century ago the neighborhood was dominated by the massive infrastructure of the Reading Railroad (on a train you could fly, surely) and the sprawling complex of Stetson Hat. The vacant lot being now used by Fly School had been lumber yards and a carpet mill that burned around 2000.

Mary Kelly Rayel, the veteran circus performer who founded the school in 2008, says she was invited to use the lot by new owners who wanted to activate the space. The school is the latest addition to the evolving neighborhood, which has seen the opening of the Brooklyn-based craftmaking school 3rd Ward, St. Benjamin’s Brewery, opening later this year a block up Fifth Street, and significant real estate development on American Street just to the east. “I thought about being in Philly,” says Rayel. “I never thought about being in Kensington, but it’s where I landed and I couldn’t be happier.” She says the response from neighbors worried over the use of the lot has been positive.

Moreover, she’s pleased to be able to reach more people–those who have become aware of the burgeoning world of circus arts and the “plenty of people out there who didn’t even know this kind of thing exists.” The Bucks County-based school has been a mainstay of the 2011 and 2013 versions of the PIFA art festival where Rayel and her staff have introduced some 1,200 people to the thrill of trapeze. During both festivals, the trapeze was located on the South Broad vacant lot now occupied by the PHS pop-up beer garden.

Trapeze, Rayel believes, can be a transformative experience. “Doing flying trapeze challenges your notion of what can and can’t do–and what you can expect of yourself,” she says, noting that the very idea might also be applied to the neighborhood itself.