Imagining The House That Was Here In Point Breeze 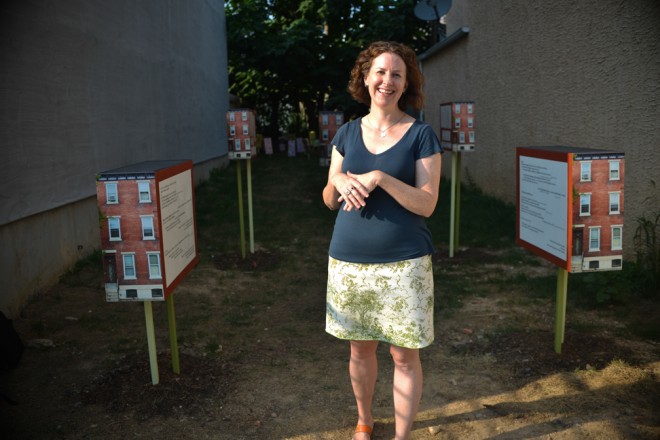 Maria Möller is a sculptor, photographer, and writer whose work explores how a sense of place—specifically Philadelphia, her hometown—can reveal narrative and cultivate community. Her installation The House That Was Here, located in a vacant lot at 2025 Federal Street, seeks to unearth the history of the house that once stood there. Several wooden house-posts fill the lot, each of them providing both historical record of the home and a space for neighbors to express their concerns and hopes for what Point Breeze might become.

Point Breeze, like many neighborhoods in recent years, is in the midst of a transition, so participation is crucial to Möller’s work. The involvement of longtime residents and local youth through organizations like WorkReady Philadelphia sends the message that artists need not always be villains in the gentrification dialogue, but can actually guide people through community change in a meaningful way.

Hidden City Daily spoke with Möller this week about her inspiration for the project.

Hidden City Daily: How does a sense of place, specifically in an urban environment, inform your work?
Maria Möller: So much of what I do right now is about Philadelphia, which is where I’m from. But I also have traveled a lot over the years and so I think being exposed to a lot of different places has made me continually want to look at “place”: what’s foreign to us but also where we find a sense of home and sense of rootedness. I feel like this city is really uniquely situated in a lot of different ways—geographically, structurally, economically—to provide the opportunity for a lot of DIY, hands-on, and “vacant lot” art.

HCD: What kinds of responses have you seen from Point Breeze residents to “The House That Was Here”?
MM: I had a little open house and we had an interesting discussion that popped up between three longtime neighbors and a couple other folks who had come by. They were talking about issues affecting housing and development in the neighborhood. I’ve been asking people questions and this one woman’s question was what did she want to see change about Point Breeze and her answer was, “This is a generational neighborhood and we want it to stay that way.” Other people have responded to, “What would you like to see change about Point Breeze?” and their responses have been “I want the business district to come up. I want Point Breeze Avenue to have lots of shops and restaurants.” Those two things do not necessarily go hand in hand, but it’s speaking to some of the things that people might feel are important.

HCD: What did you and the WorkReady team feel upon learning the history of the house?
MM: I think the kids were all the more fascinated by it, and also all the more creeped out, by the fact that it had burned down. We had to dig five rather large holes (for the posts) and we found quite a bit of charred wood as well as little bits of pottery, cloth, and clothing. It was like this little archaeological dig. I mean, we were told the house burned down but, you know, here’s the evidence. Some of the kids hadn’t realized that a house had once stood there. They didn’t realize that all these vacant lots they live around used to have houses on them. That in itself was a great discovery.