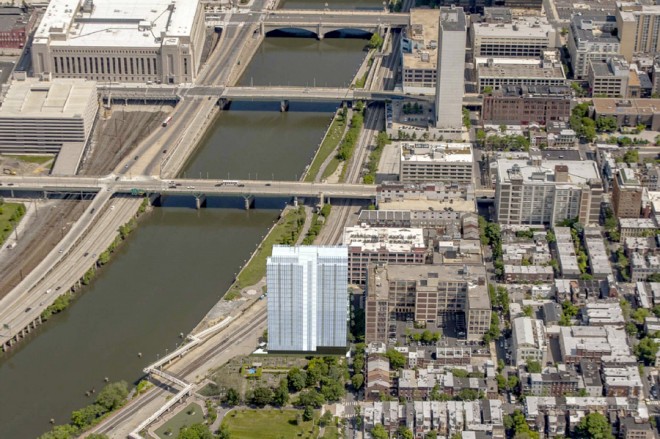 The tower’s not going to look like this — it’s just a massing study | Image: Dranoff Properties and Cecil Baker + Partners

Two weeks ago, Inga Saffron broke the news that Carl Dranoff will at last develop the triangular wedge of land on the Schuylkill River he purchased 15 years ago, carefully raising concerns like the good critic she is. Three days later, Dranoff responded with a letter to the editor, stressing that engaging the community is highest concern in this early stage of planning One Riverside Park. Tonight, he’ll get what he wished for.

The Center City Residents Association (CCRA) this evening hosts its monthly zoning committee meeting, and Dranoff’s tower is first on the agenda. As reported by Property Philly yesterday, flyers have been circulated throughout the Fitler Square neighborhood, pleading in bold letters to “STOP THE DRANOFF TOWER,” despite the fact the parcel, for years a surface parking lot at 210 South 25th Street, is currently zoned for tall buildings. 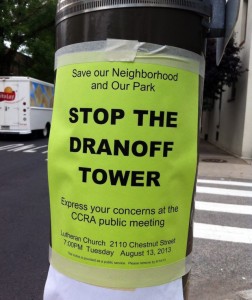 At 21 stories, it would indeed tower over its nearest neighbors: the eight-story Locust on the Park and the six-story Locust Point, each also Dranoff Properties. The Schuylkill River Park Community Garden is the neighbor immediately to the south and would thusly never fall in the tower’s shadow, although as Saffron points out, it could suffer from sunlight reflection without cautious attention to the materials facing the garden.

Now in its tenth year of use, the Schuylkill River Park is wildly successful and popular, and its growth marches southward along the boardwalk under construction, and farther south, the Grays Ferry Crescent and Bartram’s Mile sections. The Locust Street entrance has, despite the occasional railroad crossing controversy (presumably assuaged by the expensive footbridge opened last year), served as the primary access point to the park for residents in the densely populated southwestern portion of Center City, as well as tourists making a day of it on foot from Rittenhouse Square.

One Riverside Park would provide a rest and refreshment station where there currently is none, and it could give Philadelphia an extremely visible architectural icon where Mandeville Place fell through and South Street Bridge failed. With the right design from Cecil Baker + Partners, construction backed by an experienced developer not just in the city but in the very neighborhood, and approval from the City, it’s set up to do just that. And yet, flyers are taped to telephone poles shouting it down, before it’s even presented to the neighborhood.

Tonight, that will happen. CCRA’s zoning committee will review the “application for the erection of a 22 story, multi-family residential/mixed use building with 147 residential units, with retail/commercial use, 83 underground parking spaces, 2 loading spaces and 74 bicycle parking spaces with accessory fitness center, business center, game room and lounge, all as permitted in the RMX-3 zoning classification.” The meeting is at the Lutheran Church of the Holy Communion, 2110 Chestnut Street, at 7pm.