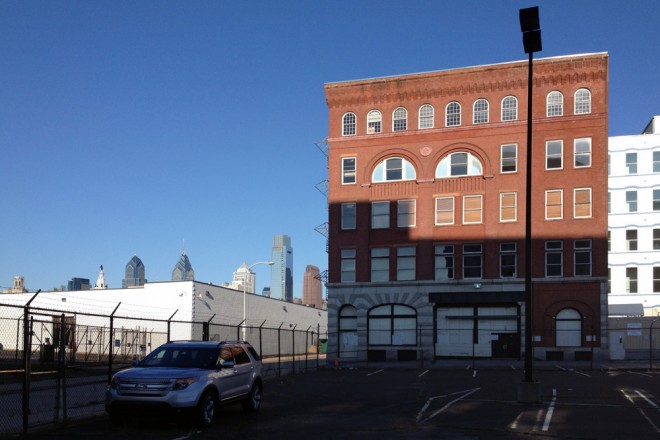 A little bit of handsome in a whole lot of ugly | Photo: Bradley Maule

When traversing the west side of the urban planning disaster known as the Franklin-Callowhill Industrial District along Willow Street, one happens upon a handsome building that faces no street. This mysterious 1896 façade reveals the origins of a connected complex of old factory buildings that are some of the only remains of the once vibrant mixed-use neighborhood that existed in ages past. 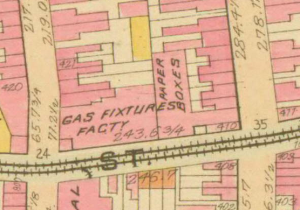 Brown & Bailey’s “paper boxes” with surrounding buildings before the fire in 1895. The short-lived annex of the factory at 412 N. Franklin can be seen in this view. | Source: Baist’s Property Atlas, Athenaeum of Philadelphia

In the early 1890s, Robert P. Brown and Edward L. Bailey built a modest factory in the middle of the 700 block of Willow Street with a small frontage, extended back behind the factories and rowhouses that faced 8th Street and North Franklin Street. This block of Franklin Street has since been struck, and the building’s front now faces a fenced in parking lot.

The Brown & Bailey Paper Box Factory produced folding paper box designs patented by the creators themselves. These boxes, designed to be shipped flat, were initially made to hold suits and cloaks, but expanded into almost every industry that required a paper box. Things were going well until August 12th, 1895, when a fire started in this factory that grew to be one of the city’s largest and most destructive of the period.

The fire took two hours to control and four hours to eliminate completely. Firefighters were hindered by the low water pressure in the neighborhood and the interference of an endless array of electrical and trolley wires that crossed in every direction. Though there were no fatalities, the Brown & Bailey factory, the W. J. Buck & Sons gas chandelier factory (at the corner of 8th and Willow), and 25 surrounding rowhouses were destroyed. And though the damage was estimated at $500,000, many saw the fire as a benefit to the neighborhood. Of the 25 houses destroyed, many were purportedly used as houses of ill repute. An account of the fire describes how many of these houses’ employees scurried through the streets half-dressed while the conflagration was fought.

Both the Brown & Bailey and W.J. Buck companies were fully insured and set out to replace their destroyed factories immediately. Brown & Bailey acquired the sites of the destroyed rowhouses facing North Franklin Street and on January 9th, 1896 announced the construction of a brand new fireproof factory nearly double the size of the original. The new factory opened by the end of that year. The Richardson Romanesque façade, facing North Franklin Street, featured a stone base followed by four stories of brick under an ornate brick cornice. Brown & Bailey’s offices stood on the fourth floor behind two large arched windows, the company’s trademarked logo emblazoned on the façade in between. This is the façade we see today (with some alterations) facing the parking lot on Willow Street. 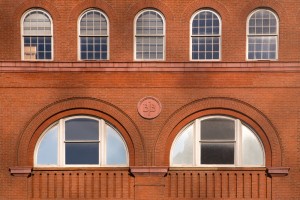 At their new factory, the company not only set out to produce newly patented folding paper boxes, but also newly patented machines that made folding paper boxes. Brown & Bailey employed a team of inventors that constantly worked to improve box-making technology and patent their findings. It was quite the progressive company for its time: a large percentage of their employees were women and their factory was one of the few in Philadelphia which facilitated an industrial education program for local youth.

In 1909, competition had gotten the better of Brown & Bailey, forcing them to reduce their employees’ work week from 54 hours to 48 on June 7th of that year. A large portion of the workers went on a strike that would later be credited as saving the company. Many of the workers who walked out were known as troublemakers and there were plenty of people in the neighborhood eager for work. Though the strike allowed the company to stay afloat, business continued to dwindle into the 1920s. Brown & Bailey cut production of box-making machinery and focused solely on box-making, continuing to patent new box designs.

In the 1920s, Brown & Bailey took a big risk with the renovation of their factory and an addition aimed to modernize and revitalize the struggling company. In the early ’20s they acquired the neighboring factory buildings and demolished them to make way for a new 5-story extension. Designed by the Ballinger firm, the addition gave the building a new façade and entrance on 8th Street and was considered quite the sight to behold when completed in July 1928. The first and second floors would be dedicated to storage and delivery. The basement, third, and fourth floors were solely for manufacturing. The fifth floor held the company’s new offices with linoleum flooring, something to brag about at the time. Product moved around the building through the use of spiral gravity chutes that all lead to the loading dock. Recognizing the company’s 1895 fire, the addition was built of reinforced concrete and featured a sprinkler system that was fed by a 30,000-gallon tank that was so heavy it required its own steel frame running all the way through the building to the ground. The combined complex now boasted 122,000 square feet of space. A large parking lot along Franklin Street was included with the addition, almost as if they saw the neighborhood’s asphalt-filled future. Yet another large parking lot was added on 8th Street a decade later. An extra bay of windows was added to the 1896-built Franklin Street side of the building as well. 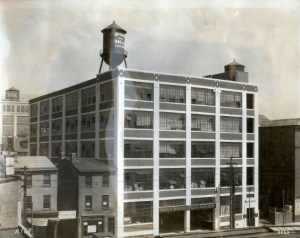 The modernization of the factory was a huge success. Brown & Bailey would survive into the 1970s, witnessing the total destruction of the neighborhood a decade earlier. By the end of their reign, they were sharing the building with other companies who could use their machinery such as bookbinders and printers. The building was converted to offices in the early 1990s, now placing the entrance to the building on the north side, facing the largest part of the parking lot. In 1994, it was considered by the Federal Department of Prisons for conversion into a Metropolitan Detention Center, but a site at 7th and Arch was chosen instead.

In 1995, 24-year-old entrepreneur Thomas Lesser remade the 13,527 square foot ground floor of the 1928-built addition into a massive nightclub called Milkbar. The club was so successful that it closed within a few months for remodeling into an even more fanciful space. Lesser sold the club and moved it to Cherry Hill in 1997. The club space then became Shampoo Nightclub, the incredibly popular venue that would feature performances by Lady Gaga, Richard Humpty Vission, Bad Boy Bill, DJ Icey, Dieselboy, DJ Micro, Dave Ralph, Sandra Collins, Meek Mill, and Kevin Hart. In January, the club reopened as Devotion Nightclub.

Today, the building is owned by Los Angeles firm RPM Investments, Inc., and it still sports the 30,000-gallon water tower, decorated with the old “eye” logo of Philly.com. More than half of the building’s offices, renovated recently, are occupied. The building is currently for sale for $9.95 Million. The Strategic Plan that includes the old factory’s neighborhood, adopted by the Planning Commission on February 19th, attempts to re-neighborhoodize this region of industrial superblocks into a mixed-use community. The plan puts an extension of Noble Street through this building’s superblock and places a new building at the corner of 7th and that new part of Noble Street.

Hopefully, the Strategic Plan for the former Franklin-Callowhill Industrial District will come to fruition and replace this development void with a newly vibrant and useful neighborhood, putting an end to the horrific barrier between Old City/Center City and Northern Liberties. How about a segment of North Franklin Street to give the old Brown & Bailey box factory’s 1896 façade some meaning?