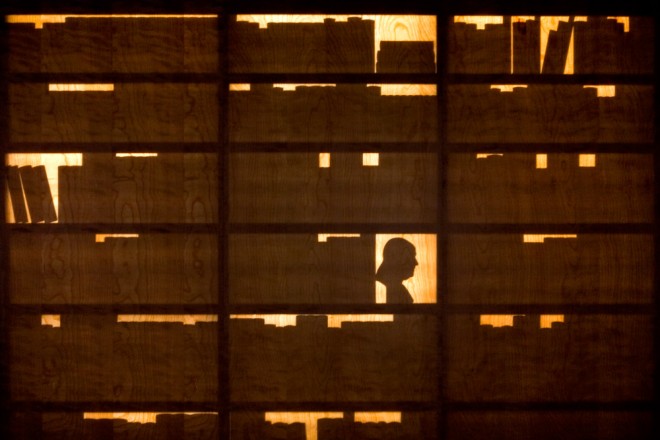 Closed for the last two years for a complete overhaul, the former Underground Museum at Franklin Court is no more. The Venturi Scott Brown ghost house remains gracefully untouched in the courtyard, as do the archaeological portals and mulberry tree, but gone are the mirrors, the neon, the marionettes, the princess phones so central to the old museum’s identity. It seems even the National Park Service wants to distance Philadelphia from its Bicentennial flop.

Also gone is the free admission. The revamped museum now incurs a $5 fee, $2 for children under 16. Children comprise a large part of the target audience, evidenced by the prevalence of games, touchscreen activities, and most noticeably, Skuggs the Squirrel, the museum’s children guide who has his own Twitter account.

The museum’s $23 million renovation (half public funds and half gifts from Pew, Penn, Lenfest, et al) looks every penny of it. It’s sleek, interactive-y, and very modern. 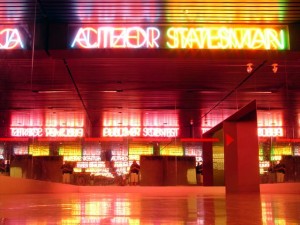 The neon-and-mirror room of the former museum, relegated to flashbacks | Photo: Bradley Maule, 2003

The old museum’s lost modernness, its primary charm, ultimately begat its demise. Independence National Historical Park officials are quick to call the former features dated, even weird. Indeed, the mirrored hall with neon flashing the words INVENTOR, STATESMAN, AUTHOR, and the like—that was some tripped out 1976 stuff. But like its Bicentennial brother, the Liberty Bell Pavilion, it wasn’t deemed worth saving. At all.

Karie Diethorn, curator at Independence National Historical Park, says that everything from the old museum was trashed. “We saved all the artifacts and kept all the replicas of the Franklin inventions,” Diethorn says. But everything else—neon, mirrors, phones, marionettes—”it was discarded. Nothing was salvageable.”

Perhaps more importantly, it proved bureaucratically too difficult to salvage. “This stuff is government property, so it can’t be just given to anyone,” Diethorn replied after I mentioned the neon artist and collector Len Davidson. “The only way the federal government can divest itself of property is to sell it through the General Services Administration,” Diethorn explains. “The decision was that it was not cost effective.” There is, however, a neon sculpture of Franklin’s bust for $495 in the all new gift shop. 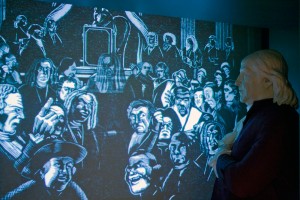 This animated feature, of figures discussing monarchy and tyranny, is not unlike the old “Franklin on the World Stage” marionette exhibit | Photo: Bradley Maule

To be sure, the new museum will have no trouble attracting visitors. After all, it’s the only museum devoted to the life of perhaps the greatest American—the most influential and inspiring Philadelphian—and $5 won’t break anyone’s bank. And the exhibitions, organized by five of Franklin’s traits—dutiful, ambitious, motivated, curious, persuasive—digs deep into his legacy and even his complexity. One of the interactive screens addresses Franklin’s curious stance on slavery, and after reading various observations and accounts of his family’s ownership of slaves and Franklin’s later-in-life abolitionist tendencies, the visitor is left to render his or her own judgment. The last room of the 20,000 square foot museum evokes Franklin’s library at his home just upstairs, with animated projections relating to his autobiography and life in Philadelphia.

Franklin’s legacy and proverbs have filled books since even before his death in 1790. But at the sparkling new Benjamin Franklin Museum, Lewis Mumford comes to mind: “Every generation revolts against its fathers and makes friends with its grandfathers.” Mid-century modernism has at last gained the favor of the preservation community, but at least here in Philadelphia, the 1970s are literally disposable. The quirky, psychedelic interior of the old Underground Museum at Franklin Court, opened only 37 years ago, joins the Philadelphia Life Insurance Company (PLICO) Building, New Market, The Vet, and The Spectrum in the landfill, replaced by the latest technology—for now.

Like the frontline technology of the Underground Museum before it, the Benjamin Franklin Museum’s own advanced technology will eventually grow dated and need to be replaced. Perhaps it will be salvageable this time.

The new Benjamin Franklin Museum at 314 Market Street opens this weekend, and the public gets a free preview on Saturday and Sunday before the $5 admission takes effect. Visit the museum’s web site HERE.