A City Of Music Now–And Then 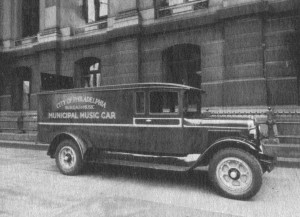 The municipal music car, the traveling musical vehicle of the Municipal Bureau of Music of Philadelphia. From Philadelphia: Historic in the Past, Inviting in the Present, Superb in the Future (c. 1930).

On the Parkway, municipal workers are preparing for this weekend’s Made in America concert, the largest performance event of the year. Organizers and local officials say Made in America is meant to stamp Philadelphia a city of music, an old moniker that took hold in 1929, with the creation of a small agency called the Municipal Music Bureau of Philadelphia.

Headquartered in room 402 of City Hall Annex (now the Courtyard Marriott Downtown Hotel), the Philadelphia Bureau of Music was formed in early 1929 by Mayor Harry Mackey as part of the Department of Public Welfare (now the Department of Human Services), a fulfillment of a campaign pledge. State legislation (P.L. 9, No. 7) authorized “the establishment, and organization of a Bureau of Music, in cities of the first class, and ratifying ordinances of such cities heretofore passed for that purpose.” Since it applied only to Pennsylvania “cities of the first class,” the act was meant only for Philadelphia, the state’s only city to fall under the 1895 definition of a “first class” city. 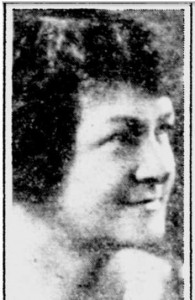 The resulting Municipal Bureau of Music was a first in the nation—another Philadelphia first (in the 20th century, even despite the domination of the Republican machine, the city’s firsts were often in municipal reform and innovation). Established with an appropriation of nearly $100,000 for 1929-1930, Mayor Mackey placed it under the direction of Mrs. Clara Barnes Abbott, who had been identified with local musical affairs since 1908 when she became active in the Matinee Club of Philadelphia. Abbott, who wrote the 1928 How to Organize a Music Club in Your Community, was an advocate in the movement to have the Philadelphia Orchestra give children concerts. By 1930, Abbott became vice-chair of a committee that ran the fourth National Radio Audition, a nationwide competition to discover unknown singers–a kind of early version of America’s Got Talent via radio.

The agency conducted a number of activities in the first summer of its existence, including a junior music festival at Funfield Playground (22nd Street and Sedgley Avenue) and a conclave of junior bands held on the steps of the Philadelphia Museum of Art. The Music Bureau of Philadelphia also issued bulletins and pamphlets related to music (including reams of sheet music), and answered thousands of letters pertaining to the creation of music. Moreover, it installed radios–donated by the Atwater Kent (Radio) Manufacturing Company–in some 3,000 hospitals, community houses, playgrounds, and other institutions around the city.

The ambitious Bureau also gave weekly concerts largely devoted to chamber music at the Academy of Fine Arts. It provided free Sunday concerts with the assistance of the National High School Orchestra, an ensemble organized under the auspices of the Music Supervisors’ National Conference. The orchestra’s musicians helped promote instrumental music education through concerts and radio broadcasts presented throughout the United States.

Various municipal bands came under the supervision of the Municipal Music Bureau, which also engaged conductors, singers, instrumentalists and lecturers for special holiday occasions. In fact, the agency provided neighborhoods with expert community music workers who would spend time helping communities organize musical activities, as well as find and instruct local people who were capable of carrying on those activities. The Bureau even gave instruction to playground leaders in organizing toy symphonies for the public.

One of the municipal band under the Municipal Music Bureau’s control. From Philadelphia: Historic in the Past, Inviting in the Present, Superb in the Future (c. 1930).

One very visible and indispensable tool used by the Bureau was the “municipal music car.” Traveling from district to district during the summer of 1930, 1931, and 1932, the special car visited every recreation center and playground in the city, “carrying to the people, in the streets of the community, tuneful melodies and dance rhythms.” By some estimates, the car reached about 600,000 people in its first year alone. Perhaps no single municipally-sponsored musical activity in Philadelphia ever reached a larger audience than the music car.

With streets typically roped off to allow dancing, the music car providing popular music for community singing events and dances. Members of women’s organizations served as dance chaperons and refreshments were sold to raise money for local philanthropies. The car also visited skating rinks one evening every week to provide music for skaters; Music Bureau employees even ran roller skating contests. In addition, the vehicle was equipped with a microphone, a screen, and a stereopticon, thus making possible occasional film showings. 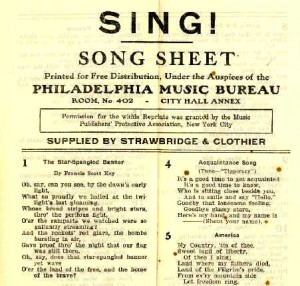 Some sheet music provided by the Municipal Bureau of Music, supplied by Strawbridge and Clothier Department Store.

The Municipal Music Bureau was a genuine example of a governmental success. It even stimulated interest to inaugurate musical performances at the original Robin Hood Dell, as Clara Barnes Abbott proposed that the Philadelphia Orchestra present a series of summer concerts at a newly-built amphitheater near Laurel Hill Cemetery. The first concert occurred on July 8, 1930, with about 12,000 people attending. Philadelphia’s tradition of free outdoor concerts was on its way.

Alas, the Philadelphia Municipal Bureau of Music itself lasted only until about 1933. In a prequel to Great Recession-related belt tightening and even the present use of sequestration, financial difficulties caused by Depression forced the discontinuation of this novel civic service, despite its broad appeal.

It’s certainly worthwhile to imagine if this modest music-propagating agency had managed to survive the 1930s that it could have made a real difference in the city’s subsequent cultural development. Its breadth could have been as great as the Mural Arts Program is today. But whatever the case, for a brief moment in time at the start of the Depression, Philadelphia was a true city of music.