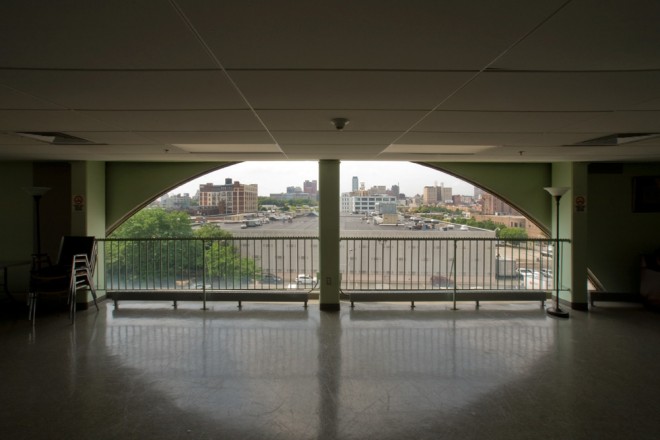 “So where’s the punch line?” I asked Guild House director Karen Hudson, during a recent visit to the non-profit retirement complex at 711 Spring Garden Street. The whimsical spire, the critical and crowning component of the building’s front façade composition, and perhaps the defining feature of a building that defined a movement, had gone missing.

With 25 years experience at the organization, Hudson is probably used to this sort of question. Over the last decade as its Regional Director, she’s overseen nearly $10 million in renovations to the historically designated building.

Commissioned by the Friends Rehabilitation Program, designed from 1961-1963 by Robert Venturi (then of Venturi and Rauch), and occupied in 1964, the Guild House provides independent living options for seniors under the US Housing and Urban Development’s Section 202 program (supportive housing for the elderly). The building’s 91 units, which vary from mainly efficiencies to a few two-bedrooms, were renovated in 2009 under Venturi’s watchful eye and that of his successor firm, VSBA, to update the heating, cooling, security, and fire prevention features, and to make certain electrical upgrades. The renovation, completed in three phases to keep the building in operation, also expanded the building by taking advantage of a disused basement space. In the basement, VSBA carved out a new wellness room, a favorite among residents, which includes fitness and recreation equipment and lounge space, and added a social worker’s office and visitor services room. On the ground floor, a new laundry facility was added, although each floor has had a small laundry room along with trash disposal since the building’s opening. 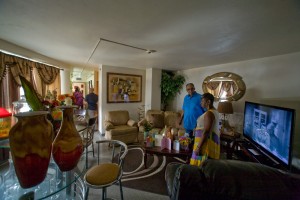 The units themselves are surprisingly efficient and full of light, and these qualities were not affected by the renovation. The one-bedroom units on the south-facing side have a transition space lit by a clerestory window above flush mounted cabinetry for seasonal storage or extra pantry space. Plants and decorative objects delight on top of the clerestory sill, visible from the adjacent kitchen and entry living/dining area. Other units have full wardrobes providing over 16 linear feet of storage. This layout provides a more efficient means of storage than deep closets, and adds acoustical insulation along the zigzag corridor beyond. The wall-hung commercial bathroom sinks are of an everyday variety, which Venturi was sure to retain during the renovation. The door handles are all lever-style, a considerate choice for the aged, installed long before 1992 ADA guidelines made them mandatory. The units’ doors are adorned with decal numbers that evoke the large commercial signage of the façade.

Currently, there is a waiting list of over 5,000 people for the 11 handicapped-accessible units. A nearly equal waiting list exists for the remaining 80 units, according to Hudson. Larry Scott, a long-term resident, praises the Guild House from a first person perspective. His mother lived there for 27 years, and now Scott lives in a sixth floor one-bedroom apartment with his wife and cat. “I’ve been coming here a long time,” the US Navy veteran says, “and I’ve witnessed the [positive] transformation over the years.” The waiting list, coupled with an ongoing need for low-income housing, proves that the Guild House is a success story. But beyond the recent renovation and capacity occupancy, what makes this particular work of architecture so successful—worthy of addition to the Philadelphia Register of Historic Places in 2004, barely 40 years after its completion? 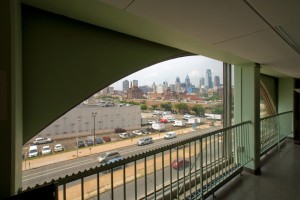 The skyline view with the scalloped rail | Photo: Bradley Maule

There’s an adage in Modern architecture, to “bring the outside in.” This is primarily accomplished through the use of large windows—often floor to ceiling—to maximize the views and sunlight. However, in the city, one often wants to keep the outside out. Consistent with Venturi’s vision, at the Guild House the outside is engaged through the incorporation of exterior urban elements. For example, the sixth floor common room has a large arched window, which frames the view south to Philadelphia’s skyline. As an aside, this arch-shaped aperture is borrowed from the master bedroom in Venturi’s iconic “Mother’s House,” which he designed for his mother in Chestnut Hill a year before the Guild House. The arched window at Guild House runs from floor to ceiling, and there is a low railing to prevent any residents from experiencing vertigo. However, the railing is an everyday exterior grade product with anti-sitting scalloped flanges welded to the cap. The tactile effect is one of surprise, given that one is drawn to the view and the hand naturally falls on the railing’s scalloped edges due to its height. Overall, the effect is simultaneously decorative, functional, and a witty commentary on that Modernist adage.

But the most celebrated everyday element of the Guild House is its gilded antenna, which was absent when I visited, prompting my question to Hudson. Other everyday elements incorporated into the architecture provide further site context. The chain-link fencing that borders the Spring Garden façade is original, used at Guild House long before Frank Gehry incorporated chain-link into his own Santa Monica home or Phillip Johnson created his chain-link folly, Ghost House, at his New Canaan estate. Here, the fencing’s posts are capped by round balls, creating an ironic nod to stateliness. Original barbecue stands and picnic tables lie beyond this accessible perimeter. The rear façade is a flat wall of near-square openings reminiscent of similar public housing facilities. The rear yard, “suburban” and fenced-off, is unmowed, and might be better utilized as a play area for children in the neighborhood, which would further integrate the rear of the building into its context.

There is precedent for this kind of gesture within the public corridors of the Guild House that zigzag throughout each floor. In the early 1960s, children and teachers from local schools (everyday citizenry) created tiled murals with imagery of the city which line the walls of the corridors and help to color code each floor. 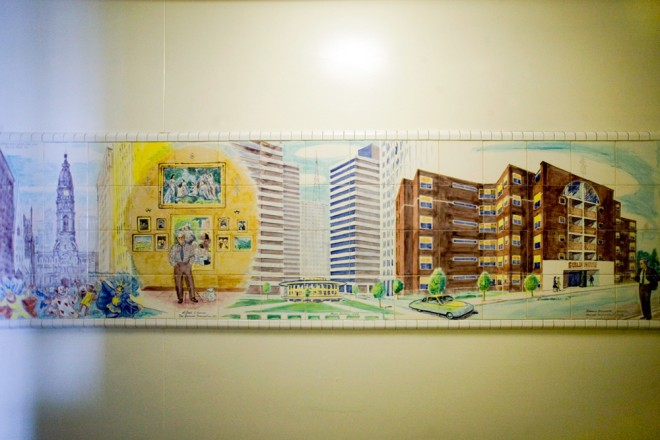 Hand crafted tiled murals adorn the walls of each floor of the Guild House; this one depicts city scenes including the Mummers in front of City Hall, Albert Barnes with his art collection, Penn Center, and the Guild House itself | Photo: Bradley Maule

Venturi also used a number of visual tricks on the façade. In an ironic twist on the tradition of displaying the best materials at the entry to the house, the massive, polished, granite column at the entry looks as if it could support an ancient edifice, but instead supports a façade of open balconies topped by a flat, empty arched pediment. The gilded, over-scaled commercial signage announcing the building’s title is visible to even a severely myopic resident from a passing bus. The indentations at the parapet reveal the true thinness of the tri-partite, Renaissance-inspired façade. A personal study revealed this façade to be cleverly composed through the use of golden proportions.

With its Modernist use of everyday details and nods to the past, one might wonder what architectural movement the Guild House represents. Most architectural history courses are linear, and therefore the architecture student is exposed to the difficult transition from the “pointless” decorative architecture of the Victorians, to historical eclecticism, Art Nouveau, Jugendstil, Neo-classicism, Beaux Arts revival, Art Deco and Fascist Rationalism, and eventually to the machined and refined abstract stylistic freedom of Modernism. Modernism was bestowed upon us by the De Stijl movement, the International Style and the beloved Bauhaus and its offspring. Within these major movements within Modernism, finding a place for the genius of Frank Lloyd Wright and Alvar Aalto, the Finnish architect, was challenging. Here were architects who, through their use of humble materials, scale, spatial complexity, decorative features and site orientation, were simultaneously modern and “off-the-reservation,” and therefore relegated to “Regionalism.” There is a complicated humanity within their work that embraces the inherent complexity of individuality, while celebrating the present day through forward design approaches. 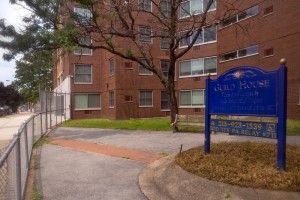 Even the seemingly ordinary chain-link fencing was part of Venturi’s conceptual plan at the Guild House | Photo: Bradley Maule

Following the triumph of Modernism over needless historical references and adornment, up steps Robert Venturi, a student of Louis Kahn and eventually an influence upon his mentor. The Guild House is an early physical manifestation of Venturi’s theories, and it provided an example to which Venturi himself referred in his seminal book Learning from Las Vegas. When the Guild House is studied in architectural history courses, it is presented as the example of Venturi’s Post-Modernism, largely because of its integration of subverted historic architectural elements.

Venturi’s work is a shock to the architecture student, who may ask, as I did, “Why has he turned his back on his Modernist roots?” and “What is the architectonic meaning of this Post-Modern aesthetic?” I recall my architectural history professor at Pratt Institute derisively describing the Guild House, most likely out of frustration with the eventual visual interpretation of Venturi’s text by the likes of Michael Graves and Robert A.M. Stern and lesser known architects who perhaps took Venturi’s writings too literally. Philadelphia’s skyline is rife with poorly produced Post-Modernist buildings, and being the anointed progenitor of the movement, Venturi has often been derided by many contemporary architects for his role in it.

But like Aalto, whom he admired, Venturi also sought to incorporate individuality, humanity, and humble materials into his architecture. What I found most interesting during my professor’s lecture about the Guild House was not the knocks on Post-Modernism, but the final reaction of his audience: a wave of laughter. The punch line of the lecture was the pinnacle of the gold anodized TV antenna centered above the glassed pediment of the Guild House. As my professor queried, “What do senior citizens do all day? Watch TV.” We laughed, not at the building, but with it.

Eliciting an audibly pleasant emotional response in architecture is rare—a triumph, really. Even with the overt metaphorical reference, the complexity of the site context is evident. Philadelphia is a city of neighborhoods with a fabric of brick townhouses and stone religious buildings. The Guild House uses everyday commercial brick, double-hung windows and pleasing proportions. The massing of the building fronts Spring Garden Street directly and then steps back symmetrically for light, air and views. The gilded TV antenna recalls the city’s numerous, albeit dwindling, liturgical spires, and like them, reaches toward the heavens for divine inspiration. 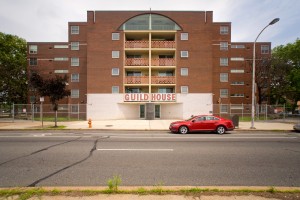 When the Guild House was completed, Modernism was widely regarded as the mode for nearly all building typologies. Yet, does the abstract form and styling of Modernism relate to an older generation that did not grow up with it? The Guild House uses features to which its residents could relate, such as the aforementioned double-hung windows, common brick, and classical proportions, but applies Modernist tenets through the use of large windows, clerestory glass, and efficient unit layouts with modern amenities. Add all of that to tongue-in-cheek gestures like the signage and the steeple-like antenna and the result is a built work for humans, not machines.

As for the punch line, the currently missing antenna, it will return. Karen Hudson indicates that it is currently with Domus, the contractor who’s handled the renovation, being refurbished to its original gold anodized state. As it stands, without the TV antenna, the Guild House loses some of its uncommon wit, leaving the building ever more ordinary. Perhaps, in Venturi’s mind, that’s not so bad at all.