Two Kensington Historic Banks, Back On The Table 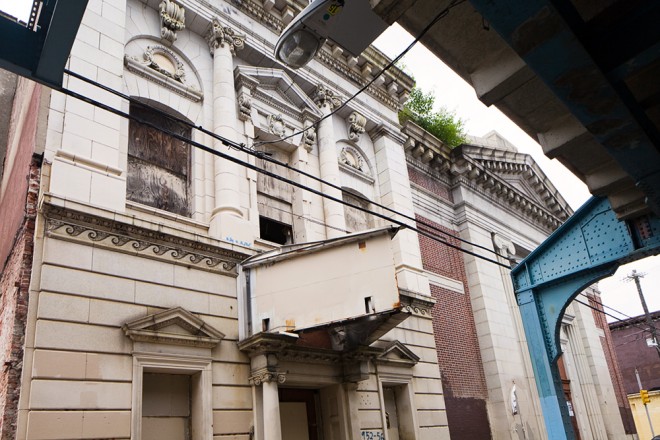 Ownership has once again changed hands for two historic Kensington banks that have been the subject of a controversial housing proposal and zoning appeal for the last year. The Norris Square Civic Association has reacquired the Ninth National Bank and the Industrial Title Trust and Savings Company, at Front and Norris Streets, and is accepting new proposals to develop the property. The previous owner, the Women’s Community Revitalization Project (WCRP), canceled its plans to demolish the bank buildings and construct low-income housing on the site.

In a related development, a Common Pleas judge has overturned the zoning approval for WCRP’s project and remanded the case back to the Zoning Board of Adjustment. In her decision on Tuesday, Judge Ellen Ceisler stated that WCRP had not presented sufficient evidence of hardship to merit the zoning variance.

Although the decision has no ramifications for WCRP, opponents of the housing are citing it to strengthen their case that any future development should include commercial use.

Norris Square issued a request for proposals to potential bidders to develop the property on July 1. The RFP acknowledges the concerns of neighbors who believe a commercial use would be more appropriate than affordable housing. However, proposals will not be restricted to commercial only, according to Maria Sourbeer, Norris Square’s director of real estate. The deadline for proposals is next Monday, July 29.

Sourbeer said that the RFP was circulated “far and wide,” including among opponents of WCRP’s project. As part of outreach efforts, a dozen likely bidders were given a walk-through of the property in mid-July. Both non-profit and for-profit developers have been invited to submit proposals.

Among the central criteria that Norris Square will consider from bidders are quality of the proposed design, with a preference for sustainable energy solutions, economic impact on the neighborhood, availability of financing, and the ability to develop without requiring a zoning variance. 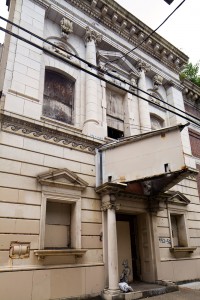 The RFP also makes reference to the banks’ listing in the Kensington Textile National Historic District—which makes them eligible for historic tax credits—and indicates that Norris Square will consider proposals to preserve the conjoined buildings in part or in full. However, preservation would not be the deciding factor in selecting the winning bid.

The property at 1942-58 North Front Street, which also includes vacant lots to the south of the banks, is zoned C2 for mixed-use commercial. WCRP’s request for a variance to redevelop the site as all-residential led to an appeal by neighbors, who were as concerned about preserving the banks as having an appropriate zoning use for the property.

However, as Hidden City reported in May, WCRP ultimately decided to cancel the development and return its low-income housing tax credits to the State of Pennsylvania. Ownership of the property reverted to Norris Square in July. Nevertheless, the appeal remained on the docket and was finally heard in the Court of Common Pleas last Wednesday, the 17th.

The attorney for the appellants, A. Jordan Rushie, argued that the ZBA had erred in its ruling of hardship based on an inaccurate economic study of the neighborhood. Rushie also called two witnesses to testify: Christopher Somers, a local realtor, and Jesse Gardner, a landscape artist and preservation activist. Both witnesses asserted that a demand for the property did exist and that it could be developed and restored if it were offered for sale on the open market.

“We are glad that Judge Ceisler agreed that this property should be used for commercial purposes in accordance with how it is currently zoned,” Rushie said following Tuesday’s decision. He added that his clients had no conflict with affordable housing, only that the site was not the right location for it.

“The area under the [Berks station of the Market-Frankford] El is a burgeoning commercial corridor that links East Kensington, Fishtown, and Norris Square to public transportation,” he said. “We are hopeful that the current owners of the bank will find a way to both preserve these important parts of our history, and to use them commercially like many other developers have done throughout the city.”

Reactions among preservation advocates to the news of Norris Square’s acquisition were mixed. Several claimed not to have received the RFP, while others questioned why the Norris Square Civic Association has refused to sell the property on a multiple listing service if the organization is serious about getting it developed. 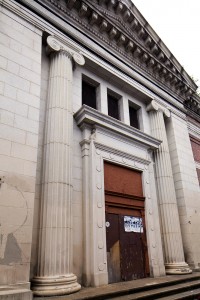 Sourbeer said that while MLS was an option, the RFP would best allow for transparency and accountability from developers prior to finalizing a deal. She gave her assurance that all parties would be privy to what ultimately happens at the site, including those who were critical of the previous project.

“Norris Square has a deep-seated belief in keeping the community involved in all of its projects,” she said.

Constructed in the 1880s, Ninth National and Industrial Trust have sat vacant since 1983. Norris Square acquired the properties in 1989, transferring them to WCRP in 2010.

The banks were added to the National Register of Historic Places earlier this year as part of the Kensington Textile Historic District, but have no local designation to protect against demolition.