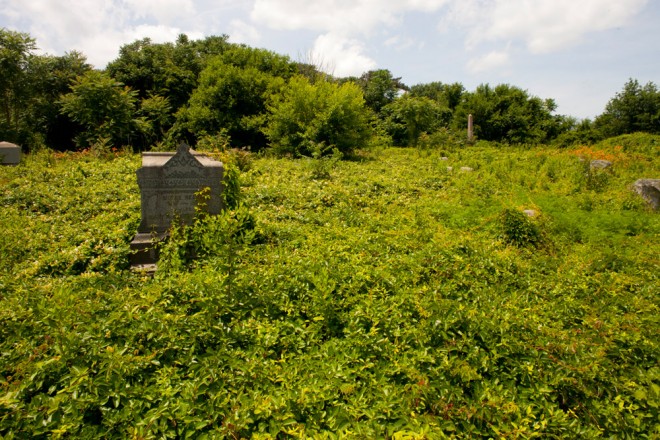 It is an estimated 380 acres of pastoral land and forest, home to wild foxes and deer, an arboretum’s worth of plant life, and a treasure trove of history etched in stone. And yet Mount Moriah Cemetery, one of the largest cemeteries in Pennsylvania, remains largely unknown, hidden by weeds.

Straddling the western edge of the city on Cobbs Creek, half of the cemetery resides in the borough of Yeadon and half in Philadelphia. For many years this place was neglected, and eventually abandoned. Amazingly, there is currently no legal owner of this property; the last known member of the Mount Moriah Cemetery Association, the governing body of the cemetery since its inception, died in 2004.

Founded in 1855, Mount Moriah was one of the popular rural burial grounds for the victorian elite of Philadelphia, along with Laurel Hill and the Woodlands. But unlike those other well preserved grounds, a quick stroll around Mount Moriah shows just how neglected it’s been. Headstones are buried and broken, monuments are toppled over. A huge ball of granite sits in Cobbs Creek. Massive obelisks and mausoleums are obscured by dense forest growth. 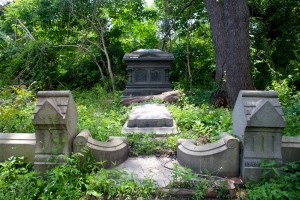 There is a strange beauty in this return to nature, almost like looking at the ruins of an ancient city, but there is also a terrible loss of history. People still come to this cemetery looking for their ancestors, sometimes digging through shrubs, bushes and poison ivy to do so.

On a Saturday I talked to board members from Friends of Mount Moriah Cemetery, a non-profit that in the last two years has taken serious action in cleanup and maintenance of this land. They were busy on mowers and weed whackers, volunteering their time to maintain the history preserved here.

Calling herself the “renegade” of the group, board member Donna Morelli comes across as the sheriff of Mount Moriah. Sporting a handgun on her hip and riding an ATV around the property, she relates her personal investment at the cemetery. Her house and backyard are directly adjacent to the grounds, and she witnessed people dumping trash nearby, a common practice in recent years.

“I started sitting out here on the weekends at night,” she says. “I ended up catching them in the afternoon and got them to clean up a little bit, and then we had a little showdown. Since then, we’ve been pretty good on this side.”

Morrelli says she works in the cemetery basically every day, mowing paths through dense areas to make sure they stay accessible. Because of an abundance of ticks, she contracted Lyme disease and was forced to quit her job. But her passion for the history of this place drives her to continue. “It’s hard to keep me out of here,” she says. “My husband is not thrilled about it.”

“There were times when we were pulling sofas, mattresses, abandoned cars out of this place,” says board Treasurer Ken Smith. He estimates that only a quarter of the grounds can be maintained by volunteers. That’s worth noting considering the population of the buried. “Officially, there’s 150,000 people interred here,” Smith says. “Unofficially, we have a feeling it’s over 300,000.”

Friends communications director and board member Ed Snyder, a cemetery enthusiast who operates the blog The Cemetery Traveler, graciously led me on a tour of the grounds. We walked to the upper portion on the Yeadon side to the Naval Asylum section. Soldiers who were treated at the Naval Hospital on Grays Ferry Avenue dating to the Civil War are buried here. Incredibly, this part of the cemetery, as well as a small military plot on the Philly side, is regularly maintained by the federal government. The mowed grass and neat grids of white headstones lie in stark contrast to the surrounding overgrown sections. A metal sculptural anchor, damaged most likely by someone attempting to steal it for scrap, stands as a monument. 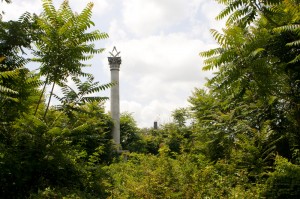 Back on the Philly side, Snyder led us to the Masonic Circle, isolated and overgrown. This section is designed as a circle within a circle, illustrating the Mason’s geometric theories. The center is marked by a tall marble column, topped with the compass. Around the edges additional monuments can be glimpsed, but the relentless summer growth obscures nearly everything.

This section also includes the former site of Betsy Ross’ grave. In 1976, city officials decided to move the Ross grave to Old City for the Bicentennial. According to Snyder, they found no remains under her stone and so continued to dig out a large area of the family plot, until the first bones found were declared to belong to Betsy Ross. Today the site is marked with a bare flagpole.

Again on the Yeadon side, a cluster of large mausoleums and obelisks stand on a hill that until recently was overrun by 10 years of invasive tree growth. Board members cut down the trees with chainsaws over the winter. Then on a large spring cleanup day, organized by the Friends of Mount Moriah and supported by Comcast, seven wood chippers were provided by Asplundh to remove the cut trees.

Snyder says on cleanup days in the spring and fall, when work is easier because of less growth, it is normal for 100 volunteers to show up. “Often those people are descendants of people who are buried here,” he says. “We have access to the records, so we will help them find their ancestors’ graves, and it’s a very emotional experience. We get people traveling from all over the country.”

Ownership of Mount Moriah Cemetery is in complicated legal limbo. Currently moving through the court system, assignment of a new owner is an ongoing process. Once this happens, the Friends group speculates that essential grant funding will become much more accessible. Snyder speculates that the last administrators of the cemetery office may not have been the owners at all. They abruptly abandoned the office, leaving the historic records to be damaged by water. 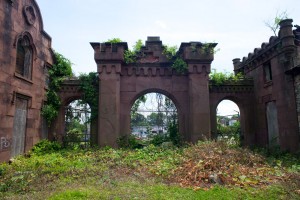 Until a new owner emerges, the Friends group does not have authority to touch the buildings or monuments on the site. This explains the deteriorated state of the Victorian brownstone gatehouse on Kingsessing Avenue. Designed by Stephen Decatur Button, the gatehouse was declared endangered by Preservation Pennsylvania in 2004.

Friends Board President Paulette Rhone speaks eloquently about her vision for Mount Moriah. “I see it as a wonderful green open space for the community, for the city of Philadelphia and beyond,” she says. “In the mid 19th century people came and picnicked on the graves of their family. We [would like to] have walks and bike rides and sporting events and kids learning history—learning the dash in between the birth and death date. Learning about sociology, horticulture and the environment. Kids know about technology but they don’t know how to just learn from the environment, and that is my goal. I see it as an opportunity for so many people, and I’m just delighted to be a part of that.”

Learn more about the Friends of Mount Moriah Cemetery at their web site HERE. To launch a gallery from the cemetery, click any of the photos below.