Shades Of The Short Life Of A North Philly Bank 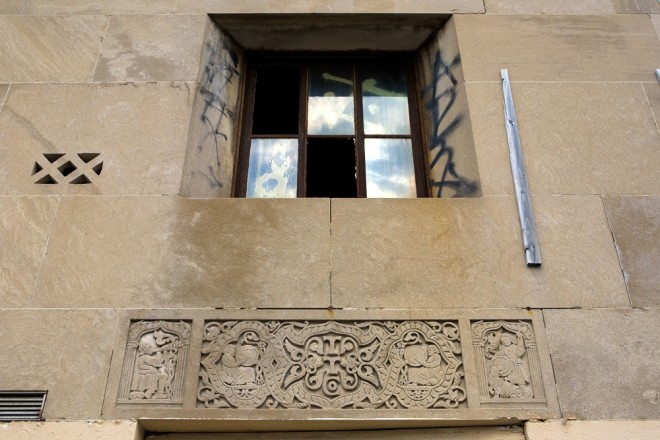 Handsome TTC motif, not to be confused with the Toronto Transit Commission | Photo: Bradley Maule

Three blocks west of Temple University’s mid-rise medical complex, a long ago built, long ago forgotten mid-rise of an earlier era of North Philadelphia stands with barely a trace to its builder. The Tioga Trust Company (TTC) was one of countless early 20th Century Philadelphia banks accredited with the State Treasury Department, and they operated from an eight-story art deco building at the corner of 17th & Tioga. 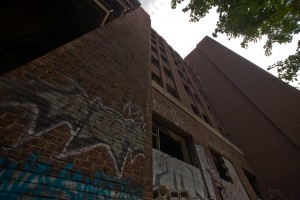 Eight stories below in the shadows | Photo: Bradley Maule

Founded in 1912, TTC operated under the guidance of president Charles Washington Rueter, a real estate broker who lived across the street at 1703 West Tioga and had investments in Lehigh Valley coal and railroad concerns. The bank’s vice president, Charles Ezra Beury, became the second president of Temple University while employed by TTC. (TTC’s art deco sibling at nearby Broad & Erie, the Beury Building, bears his name.)

A Loopnet listing, which marketed the building as part of the “Beury Portfolio” (also including the Beury Building and the Taylor Lock Building at 20th & Clearfield), claims the building was erected in 1929. That seems unlikely, though, as that same year, Tioga Trust Company, along with several other small local banks, merged with Albert M. Greenfield’s Bankers Trust Company. That company went under in 1930, the first major Philadelphia bank to due so during the Great Depression. A 1913 issue of American Architect and Architecture indicates that TTC purchased the mansion previously on the site, with plans to build a banking house there, so mid-1910s seems a realistic estimate. But then Art Deco didn’t come to America until the 1920s… its exact date, like its architect, remains unknown. [UPDATE: The architect is William Harold Lee; year still unknown.] 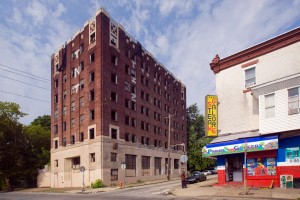 A real fixer-upper, could be student housing for nearby Temple Med | Photo: Bradley Maule

Two stories of limestone, adorned with deco TTC motifs, comprise the base of the building. Six stories of dark brick rise above it, topped by terra cotta which matches the stone foundations.

More recently, the building was a Nicetown-Tioga community center, but exactly when it closed is also unclear. As the circa-2011 property listing described it, “NEEDS GUT REHAB, 8 story Brick/Concrete building. 3 elevators. 45,000 [square feet]. Suitable for student housing or apartments or Condo Conversion.”

The building sold for a whopping $64,000 in June 2011 to Genesis Financial, Inc., an investment firm based in Spokane, Washington. Exactly what Genesis aims to do with it is unclear; their listed phone numbers have been disconnected, and additional attempts to reach them have been unsuccessful.