Planning The Future Of Philadelphia’s Other Big Ship 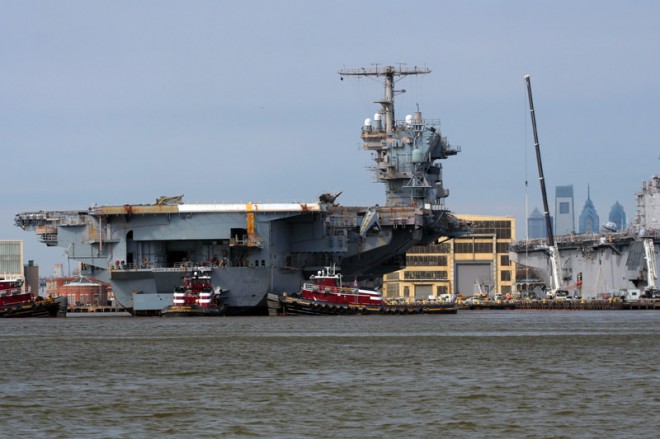 In March 2008, a recently decommissioned aircraft carrier arrived with the high tide at the Philadelphia Navy Yard, to anchor in retirement. Now, a Newport, Rhode Island nonprofit aims to move it to New England. The Rhode Island Aviation Hall of Fame (RIAHOF), whose mission is to “increase public awareness of the history and technological development of aviation,” plans to move the USS John F. Kennedy (CV-67) to the Narragansett Bay and open it as the USS JFK Sea and Air Experience museum.

Ordered less than six months after its namesake was assassinated, the USS JFK was built in Newport News, Virginia and christened by Kennedy’s daughter Caroline in 1967. The ship was then in commission from September 1968 to August 2007, serving 18 official deployments. It previously called the Philadelphia Navy Yard home during a major, two-year overhaul in the mid-1990s. Bob Gorgone, the former Director of Navy Yard Energy and Sustainability for the Philadelphia Industrial Development Corporation (who manages the Navy Yard’s development), oversaw the renovation as a Naval engineer.

“The ship is in a class of its own,” Gorgone explains—and not just figuratively. “It was originally designed to be a nuclear carrier, but it was converted to conventional power, and the rest of its class was canceled.” The USS Forrestal, berthed just next to the JFK at the Navy Yard, is one of four in its class, for example. 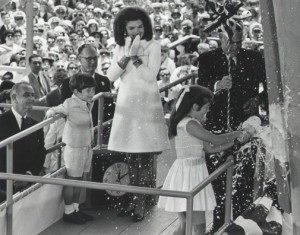 According to the project description that RIAHOF submitted to the Navy in 2012, the museum will house numerous exhibitions, including a collection of Vietnam War era aircraft replicas and a state aviation hall of fame. A centerpiece of the museum will certainly be the Captain’s Cabin. Designed by First Lady Jacqueline Kennedy, the cabin contains loads of JFK memorabilia, including a working version of a circa-1963 television and a replica of the rocking chair in which the President was frequently photographed. The cabin’s carpeting, modeled after that on the floor of the US House Chamber, earns the ship another one-of-a-kind title, that of the only aircraft carrier with carpeting.

In addition to museum offerings, it will contain assembly spaces that can be rented for events. Programming intended to ensure the museum’s long-term financial sustainability covers a broad scope, ranging from standard, catered party spaces, to recreational activities, including a laser tag complex and a “maze based on a carrier’s complex plumbing of square microwave conduits.” RIAHOF also hopes to incorporate vocational training and job resources by partnering with the area’s colleges and universities.

For the past five years, the USS John F. Kennedy has remained berthed in the shadow of Urban Outfitters’ headquarters. After being decommissioned and placed on “museum hold,” a status reserved for vessels that are deemed historically significant, the Navy moved “Big John” from Norfolk to Philadelphia’s Naval Inactive Ship Maintenance Facility (NISMF). Including the USS JFK, NISMF oversees the maintenance of twenty-four inactive ships. 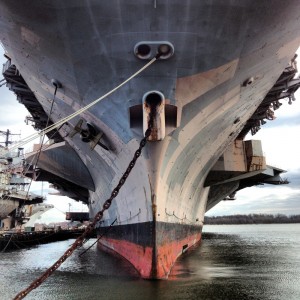 Until 2011, RIAHOF was focused on obtaining the USS Saratoga, an aircraft carrier already docked in Newport. The group had devised a plan similar to that for the USS JFK, but had to change gears when the Navy announced plans to scrap the deteriorating vessel.

According to RIAHOF President Frank Lennon, the Navy’s decision to scrap the USS Saratoga and offer the USS JFK in its place was a blessing in disguise. “JFK was in virtual mobilization readiness condition, meaning a successful applicant could ready the ship for public access at an upfront capital cost that would be millions of dollars less,” Lennon explains. “Adding the intangible value of the name JFK, especially in southern New England, creates an attractive package that should be easier to promote to donors and corporate sponsors.” Jacqueline (Bouvier) Kennedy spent much of her childhood in Newport, and she was wed there in 1953 to John F. Kennedy, then a US Senator from neighboring Massachusetts.

Lennon estimates that it will cost at least $25 million to carry out the project, which is not without precedent. There are five aircraft carrier museums in the country, such as New York’s Intrepid Sea-Air-Space Museum. (The Battleship New Jersey Museum and Memorial, across the river in Camden, was the Navy’s most decorated battleship in its service as the USS New Jersey.) Each carrier is managed by a Friends group who must complete the Navy’s mandated planning process. RIAHOF has reached the second phase of the process, which requires the applicant to secure the support of local government and other stakeholders. 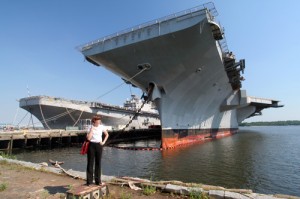 Among those wishing to see RIAHOF succeed is the Philadelphia Water Department’s senior planner, Sarah Thorp. Before guiding development of the Central Delaware Master Plan for the Delaware River Waterfront Corporation and later moving to PWD, Thorp served her country as a Naval Aviator. In her Gulf War era training, she landed her T-2 training fighter plane aboard the USS JFK. Although aircraft carriers are difficult to preserve, Thorp observes, “they are unique assets that, if stewarded properly, can be used to tell the stories of the people who choose to serve our country and who sacrifice so much to do so.”

If RIAHOF is unable to succeed, a group calling itself “USS JFK for Maine” will attempt to obtain the vessel and open it as a museum in Portland, Maine. Interestingly, the two organizations are working together toward the shared goal of relocating the JFK to New England. Neither group has established a concrete timeline, and ultimately it’s up to the Navy to decide which location is better suited.

Jeff Nilsson, Executive Director of the Historic Naval Ships Association, which promotes ship museums and supports their operators, has been in contact with both groups. “Donating an aircraft carrier is a very big deal, and the Navy wants to be doubly sure that it will be a success as a museum ship,” he says. “At this point, I would have to say that the jury is still out.”

Until a verdict is reached, the Navy’s Naval Sea Systems Command (NAVSEA) will maintain the ship’s upkeep at the Philadelphia Navy Yard.