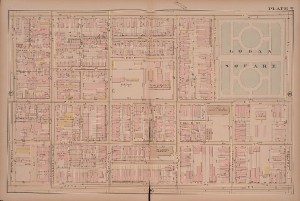 Those blueprint maps were probably based in part on the Bromley maps, like this one from 1885

In the early 1990s, as my colleagues and I set up an office of community planning at Penn’s Center for Community Partnerships, one of the first things we did was create a West Philly map. How? I took the trolley from 36th and Sansom to 22nd and Market, and walked three blocks north to the blueprint shop above Arch Street. There, and only there, you could purchase City of Philadelphia zoning, parcel, and building maps in blueprint form according to a numbered grid that covered the entire city. Making a West Philly map meant purchasing about 25 of these maps, taking them back to the office, cutting off the borders, and taping them together. Then, the map could be taped to the wall (which we did), and markered up as desired.

Soon, our office began to develop its programs, creating neighborhood plans, gathering data, and eventually overseeing the implementation of improvement projects. With some of our small budget we ordered something new–a software package considerably more expensive than the blueprint maps: GIS. Now, we could plot vacant land parcels, public spaces, houses for sale, and retail corridors. All this would make assessment easier and more fluid and of course allow us accrue and overlay data. I don’t recall the software quite living up to its potential. Did it transform the planning process? Did it allow users to easily add data? Could it interface with other programs? The answer to all three is likely no.

About two decades later, and following the broad trajectory of technology, it appears that the aspiration of early GIS is being met. In the last year, a slew of user-friendly and interactive map tools have proliferated, and more are coming. Many of these maps, from the Philadelphia Redevelopment Authority’s available properties map to the Garden Justice Legal Initiative’s new Grounded in Philly interactive map, are geared to engaging with vacant land and abandoned buildings. Others focus on tax assessment, zoning violations, and crime. Several now in development want to connect people and their energy and ideas to vacant parcels, hoping to spur action.

I spent some time with these map applications, and I offer an overview of the various map tools, and consider their strengths and weaknesses. 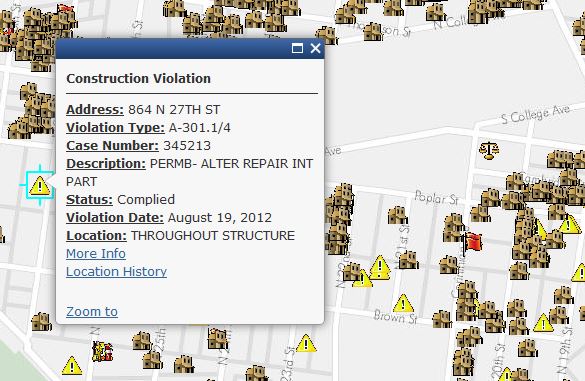 You can’t disagree with the City’s ambition on this map, which allows you to map and search just about every function related to the built environment and quality of life, from key planning elements like bike lanes, healthy eating options, solar projects, and green stormwater infrastructure installations to the expected public amenities, crime, building violations, and zoning. The map connects the user with endless data. You choose the subject, a legend appears, and you can click on map elements. For L&I violations, for example, the map will show you property maintenance, fire, construction, and business violations, and cases in adjudication. You can click on the property for detail. The map itself is clear and clean and the legend easy to read. It seems slow to zoom, however, and the user can’t really overlay data. It’s only possible to view one subject map at a time (though you can essentially toggle back and forth). 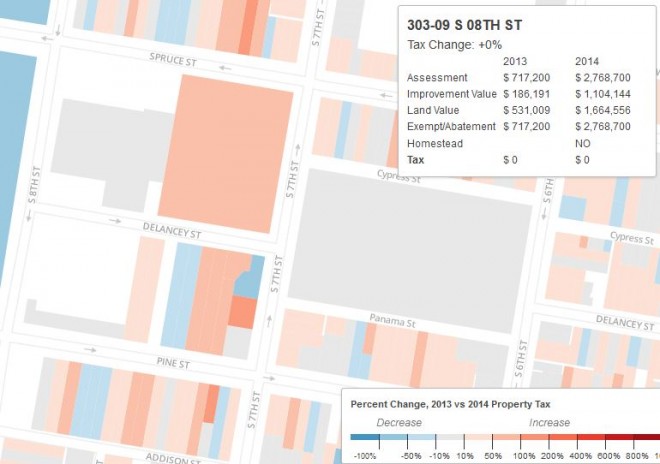 This is an exceptionally easy to use map that shows 2014 tax assessments under AVI compared to 2013 tax assessments under the old system. It shows degree of change with clear color gradations. Tell the map where you are and it will zoom to you. Search an address. Hover over the map for ease of seeing. Very useful for gaining a clean visual sense of the impact of AVI. 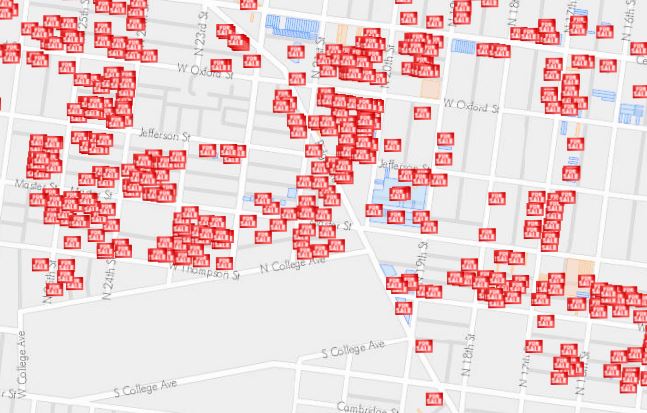 This is a clunky feeling but useful map that shows available properties owned by various public agencies. You can zoom in, but you can’t seem to zoom out. You can, however, see the properties listed in a spreadsheet. You can click on an available property, view the information, and click again to “express interest” in purchasing the property. The nomenclature on the map is like this: once you “express interest,” you can “track an expression.” 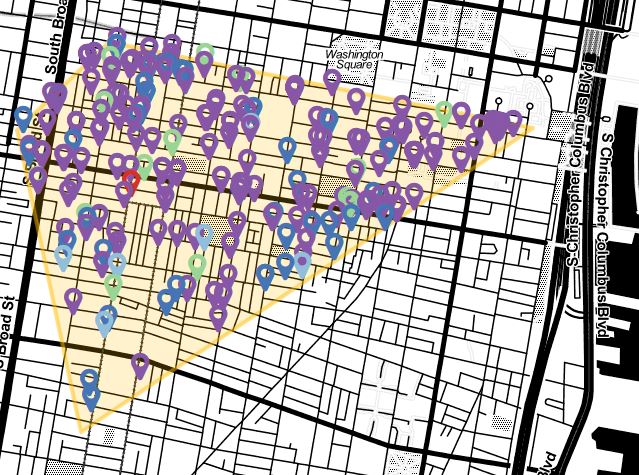 PHL Crimemapper is a straightforward map application that does one thing: map recorded serious crimes according to an physical area and date range you determine. You can view homicide, rape, burglary, aggravated assault, robbery, and theft according to any set of days within the last three years in time chunks up to six months. You can draw physical boundaries as you like–the particular crimes are then represented by color-coded tags. 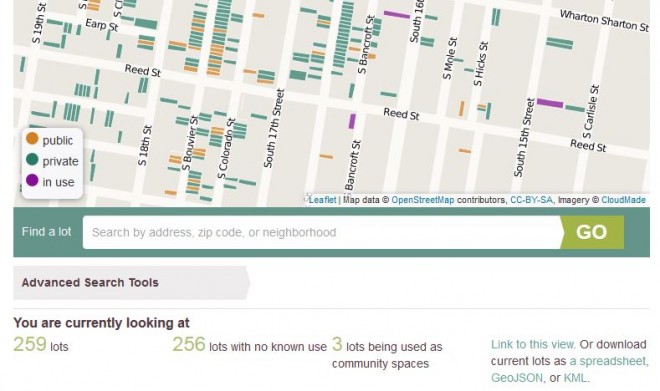 Screen shot from Grounded in Philly

The Public Interest Law Center’s Garden Justice Legal Initiative and 596 Acres of Brooklyn, which builds organizing platforms for land reuse, came together to build this site. It focuses on vacant land parcels–gardening, healthy food access, and community organizing. Through this map, you can identify vacant land that’s publicly and privately held, add photos and information, and begin to act to reclaim the site as an organizer or advocate. You can download the vacant land information too. 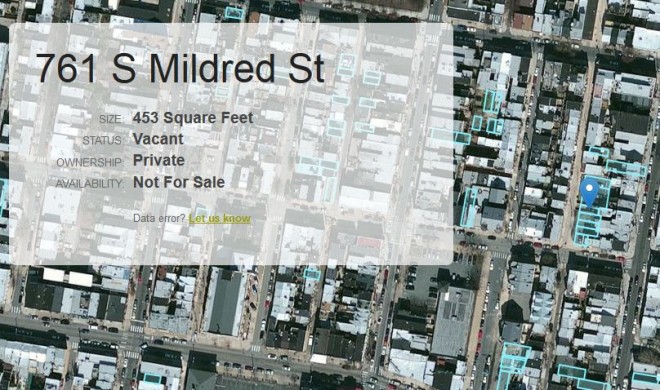 This is a similar project being designed by landscape architect Douglas Meehan (he borrowed the name Possible City from my column and book). Meehan, who lives now in Brooklyn, desires a map platform that can connect people (particularly in the design field) with land use ideas with properties. As of now, the map will show you if a property is vacant, privately or publicly owned, and if it’s for sale. When you click for more data on a vacant property, the map view shifts to satellite so you can see the property in context. This map, like Grounded in Philly, is still in development. 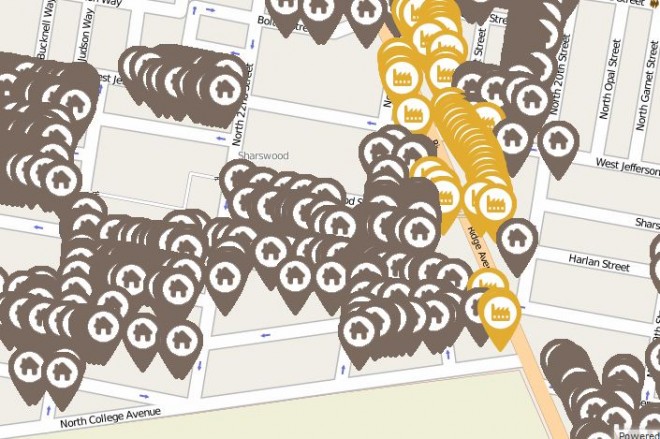 Reclaim Philly is a project of the Philadelphia Association of Community Development Corporations. Enter an address and the map will give you vacant land, vacant commercial, and vacant residential buildings within a half mile radius. The interface us easy to use, but when you search the map will respond with a pile of tags–it’s hard to see it all clearly. Clicking on a tag does get you to street level zoom and some data on the property, but as of now no path to action. This map tool, too, is in development.