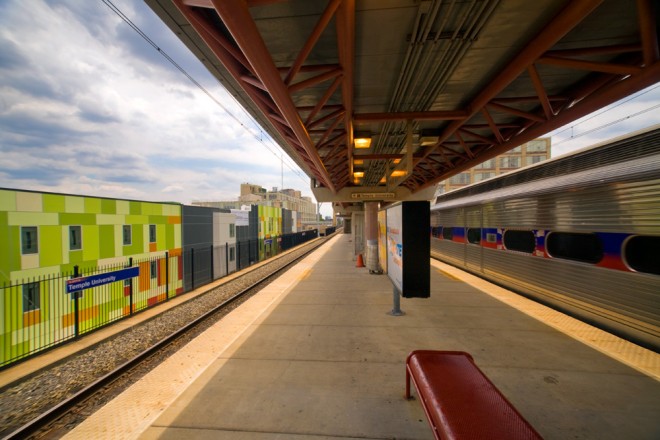 Paseo Verde, to the left of the Temple University regional rail station, is a Transit Oriented Development made possible by a federal Community Development Block Grant | Photo: Bradley Maule

The House Transportation and HUD Bill has been withdrawn and will not be voted on until after Congress’s August recess. Washington insiders have cited the CDBG cuts as part of the reason for the bill’s dwindling support. The move also indicates that the more generous Senate T-HUD bill, to be debated Thursday morning, is likely to have a stronger hand in setting future funding levels if it passes before the recess.

The City of Philadelphia has watched its federal community development funding steadily erode over the last decade. Now, with continued sequestration and even steeper cuts being debated on Capitol Hill this week, neighborhood CDCs are saying that the burden of austerity is being unfairly forced on them.

The Community Development Block Grant (CDBG) is the largest source of federal community development funding for Philadelphia; a Republican-backed budget introduced in the House of Representatives would cut that funding in half. Run by the U.S. Department of Housing and Urban Development, the program’s funds are used flexibly to construct housing, stem foreclosures, fund civic groups, and stimulate commercial corridors to benefit the city’s low-to-moderate-income residents. When the mayor digs his ceremonial shovel at the groundbreaking of a neighborhood construction project alongside members of Congress and community leaders, he’s doing it partly thanks to CDBG funding.

“There is no other Federal program that provides rural, suburban, and urban communities across the country with funding for revitalization through a wide range of housing, community, and economic development activities,” said Garrett O’Dwyer of the Philadelphia Association of Community Development Corporations, an umbrella group for CDCs. Development through CDBG “generates significant economic activity, creating much-needed jobs in neighborhoods across the city,” he said.

The status of these federal funds remains in doubt, however. This week, the House and Senate are debating their versions of the Appropriations Bill for Transportation, Housing and Urban Development (T-HUD) for Fiscal Year 2014. President Obama has requested $2.8 billion to fund the CDBG program next year, but the Republican-controlled House bill allocates just $1.6 billion for the program. (Update: An additional $350 million was restored to the program in the House on Tuesday before the bill was withdrawn Wednesday afternoon.)

The bill from the Democratic Senate exceeds the President’s request, bringing CDBG funding to $3.15 billion. Still, advocates point out that this amount is 20 percent less than the nearly $4 billion enacted four years ago. 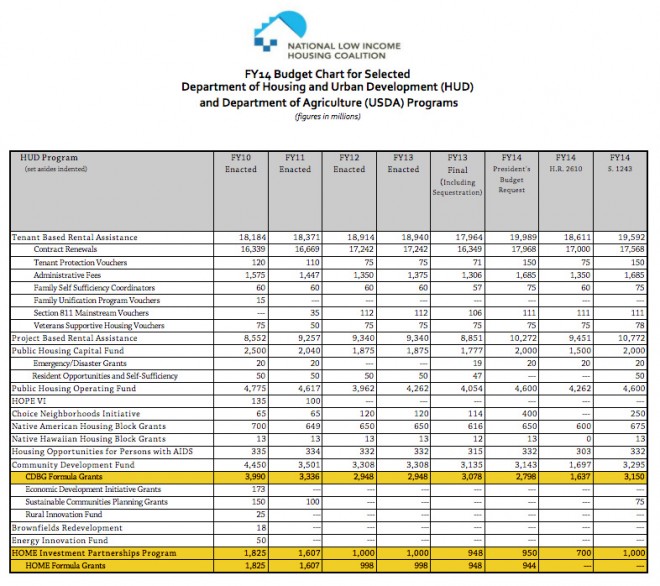 Mayor Michael Nutter had some blunt words for Congress in response to the House’s cuts. “You really have to wonder if they are aware that people are still losing their homes to foreclosure, struggling to pay back student loans and suffering from long-term unemployment,” he said, at June’s annual meeting of the non-partisan U.S. Conference of Mayors. (Nutter is the organization’s outgoing president.) “At a time when our nation is struggling to recover from recession–a program that is a proven job creator, as well as a safety net for our most vulnerable, has just been put in jeopardy when our residents and neighborhoods need it most.”

The Mayor was reacting to a failed amendment to raise the program’s funding level in the House Appropriations Committee. Congressman Chaka Fattah, whose district covers most of Philadelphia to the west of Broad Street, sponsored the amendment which would have doubled CDBG funding to $3.3 billion. The amendment was defeated in committee along party lines.

Fattah, who spoke on the House floor yesterday in opposition to the cuts, said that Philadelphia’s pre-sequester funding had been $42 million, but that it would drop to $21 million under the House’s bill.

“You cannot slash funding to these levels without serious ramifications that will be felt across the city,” he said.

Also threatened is the HOME Investment Partnership Program, which is used exclusively to create affordable housing for low-income families. Allocations for the Home Program have fallen from $1.8 billion in 2010 to $948 million under sequestration. House Republicans are seeking to cut HOME grants further to $700 million; Senate Democrats have proposed a modest raise to an even $1 billion.

City planners frequently disagree over the efficiency of design and sustainability measures in Philadelphia’s affordable housing developments, and while conflicts over such housing are common in gentrifying neighborhoods. However, very few pointed criticisms of the CDBG and HOME programs have been raised in Washington to justify cuts. In an increasingly partisan Congress, they are among multiple casualties of a budget crafted by fiscal hawks who are increasingly suspicious of all social spending, in a ploy to characterize President Obama as oblivious to the dangers of deficit spending–even though the amounts Obama proposed for community grant spending remain near the present sequestration levels.

Not all Republicans agree with the House leadership, particularly those at the municipal level. Scott Smith, the current president of the U.S. Conference of Mayors, echoed the sentiments of his predecessor.

“The CDBG program has enjoyed forty years of bipartisan support,” noted Smith, the two-term mayor of Mesa, Arizona. “Why would anyone cut this successful program again? This is just a dumb cut.”

The People’s Emergency Center, which represents neighborhoods in West Philadelphia between Market Street and Fairmount Park, has relied on community block grants to aid in its mission to reenergize the Lancaster Avenue business corridor.

“We were counting on CDBG funding to help us develop several of the properties we’ve since acquired,” said Farah Jimenez, PEC’s president and CEO. She is currently waiting on funds to fill a gap of $150,000, part of a million-dollar plan to bring new businesses and affordable rental units to Lancaster Avenue’s 3800 block. The block includes historic Hawthorne Hall, a 2013 Hidden City Festival site that PEC plans to renovate, as well as art galleries, a café and a consignment shop. With the community grant program on the chopping block, however, Jimenez worries the plan won’t see completion.

“At this point, they’re no longer trimming nails,” she said, “they are cutting into the quick.”

CDBG and HOME grants are managed by the City’s Office of Housing and Community Development (OHCD) and frequently used to complement the financing of affordable housing with low-income housing tax credits, which are often sold to investors in public-private partnership. 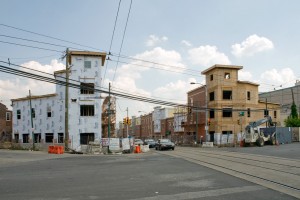 Recent CDBG projects include several transit-oriented developments of mixed residential and commercial use. Both Paseo Verde, next to Temple University, and Nicetown Court II, on Germantown Avenue below the Wayne Junction station, are nearing completion. Community grants also go toward preservation and rehabilitation efforts. Financing for the historic Nugent Home for Baptists in West Mount Airy relied on a combination of historic and low-income tax credits together with CDBG funds.

CDBG also defrays the operations of neighborhood advisory committees or NACs, which support communities where more than half of the population earns below 80 percent of area median income. Additional HOME and CDBG funds support home counseling and foreclosure prevention throughout the city. According to Paul Chrystie, spokesman for OHCD, More than 5,800 Philadelphia homeowners have been able to stay in their homes since June 2008 as a result.

Although CDBG has enjoyed relatively bipartisan support since its inception by President Ford in 1974, some present-day criticisms from the right have sought to address the program’s efficiency. Conservative Oklahoma Senator Tom Coburn, for example, cited a report by the Government Accountability Office to make the case that CDBG had “extensive overlap” with other federal grant programs.

“In the long term, Congress needs to address the proliferation of programs all trying to address the same problems,” said Coburn, who proposed an amendment to the Senate T-HUD bill to cut its CDBG funds to the $2.8 billion level requested by the White House. He added, “Opportunities to put CDBG dollars to better use assisting the poor and encouraging development in needy areas are clearly rife.”

Community grant advocates say that questions about overlap and efficiency are a red herring.

“There is simply nothing like [CDBG],” said Garrett O’Dwyer, “neither in the flexibility nor resources it provides. In Philadelphia these funds are much needed and used every day for important revitalization activities in neighborhoods across the city.”

Paul Chrystie noted that there are no alternative federal funds for affordable housing. “Without CDBG and HOME, people will lose their homes to foreclosure,” he said. “Fewer affordable homes will be built. There will be fewer construction jobs.”

Chrystie also pointed to OHCD’s most recent RFP for affordable rental housing, which resulted in $35 million in requests for funding that totals just $10 million: “The need greatly outweighs the available funds,” he said.

A final vote on the House bill is expected today or tomorrow, while a cloture vote on the Senate bill will be held by Senate Majority Leader Harry Reid tomorrow.

If the Senate and House bills pass in their current states, the final T-HUD bill will have to go through budget reconciliation to resolve the funding disparities. The Obama Administration has indicated that the President would veto a bill containing the House’s cuts. However, if no agreement is reached, cuts will continue under the prevailing sequestration law, O’Dwyer said.