Glimpses Of The Holy Land 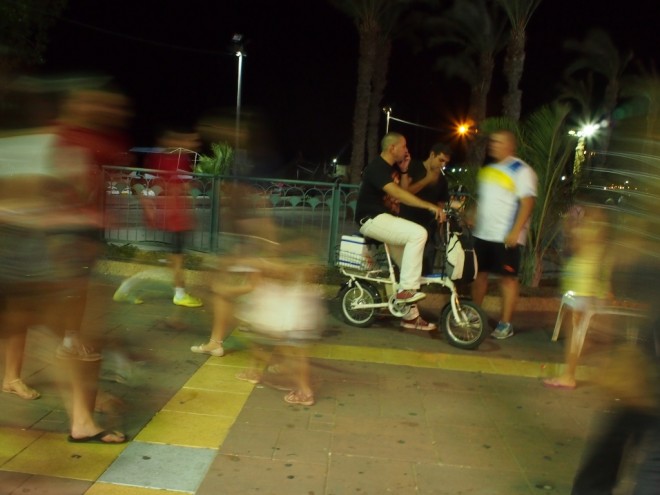 They were glimpses, that’s all I got–of the Arab city of Nazareth, of Jerusalem, of Tel Aviv, of the Negev, of Syria from across the border, of black Bedouin tents set in the chalk and glare of the Jordan desert. A traveler is struck dumb, for one, and if he’s not reporting, and not making his way to the backs of shops or inside strangers’ apartments, or to the shade of a school’s courtyard or at a table in a university lecture hall or getting a shave in a crowded medina, he can only proffer and guess.

I went to Israel on a family trip, the occasion of my niece’s bat mitzvah. I went with my liberal prejudices and love of the work of Israeli novelists Amos Oz and David Grossman, and my unquenchable desire for ancient Muslim cities–labyrinthine streets, alternating darkness and light, sour smell and piercing color, insistence and reticence all at once. With my little Olympus, I stole some 4,000 images.

The politics fled from me quickly; they hurried along from my mind in bursts of confusion and contradiction and I was left only to gaze and ponder the security wall around the West Bank, the pro-Palestinian graffiti in the doorways of Jerusalem’s Old City, minarets rising above countless Israeli towns, Israeli flags forcefully planted at the Damascus Gate of Jerusalem, a Tel Aviv beach–Givat Aliyah–inhabited equally, and peacefully, by Muslims and Jews. 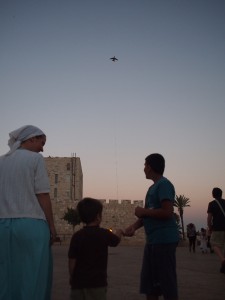 I watched a Palestinian boy show an orthodox Jewish toddler how to fly a kite and held it with him as his mother smiled joyously on and a block away I was manhandled and called a dirty Jew by an Arabic-speaking shopkeeper who didn’t believe me when I said I didn’t have time to browse his store (it was true: we had to be at dinner at 7:30). Space signifies everything and time confirms it; space is devout; space is trampled on; space is cursed; space causes people to kill. At the Western Wall, with the Al Aqsa Mosque and the Dome of the Rock above, space is a battleground for gender; space is secreted for the divine; space is shared haphazardly; space is ruthlessly defended.

And here I found the manipulation of space through architecture and street art all the more potent. At the Holocaust museum, Yad Vashem, I was moved to tears not by the now familiar story of the genocide, but by the momentary experience of survival engendered by the architect Moshe Safdie; you leave the galleries, leave the names and the stories of the murdered, of the survivors, and are propelled by the force of the building itself in to the defiant glare of the promised land. Your dirty privilege swells from your stomach into your throat. 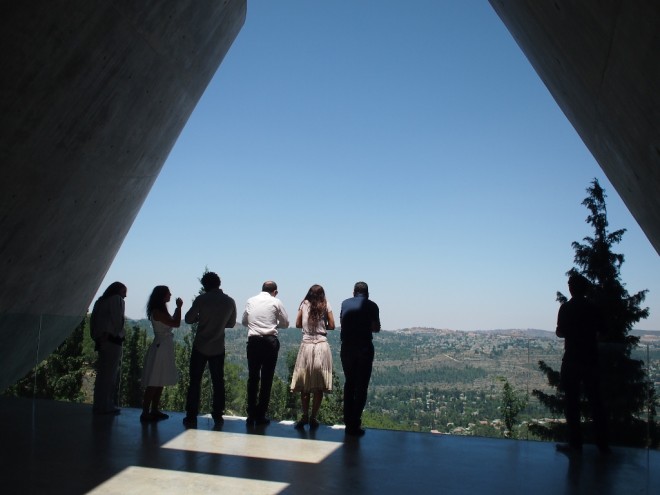 In the long hall of the old cotton makers’ souk in Jerusalem, faces blur and neon collides with stone and dirt and darkness. In Florentine, a Tel Aviv neighborhood more akin to a hip section of Barcelona or Athens or the Northern Liberties of a decade ago than the cotton souk of old Jerusalem, street art–sometimes diminutive, sometimes overpowering–speaks, sometimes in a whisper, sometimes in a shout, with all the nervous confusion of a place worn from love, what really must be a kind of madness. 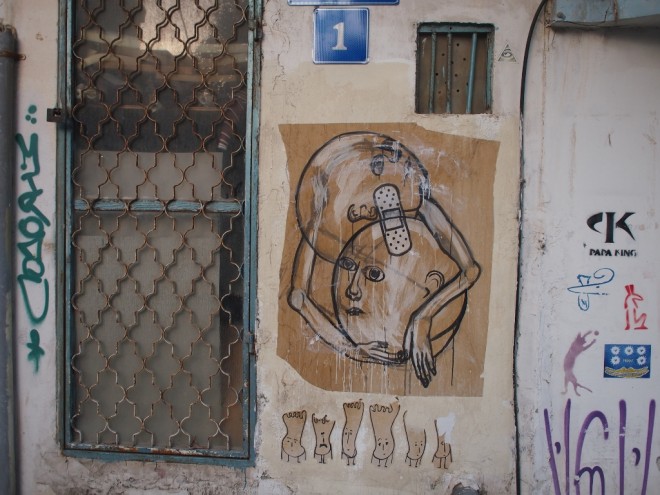