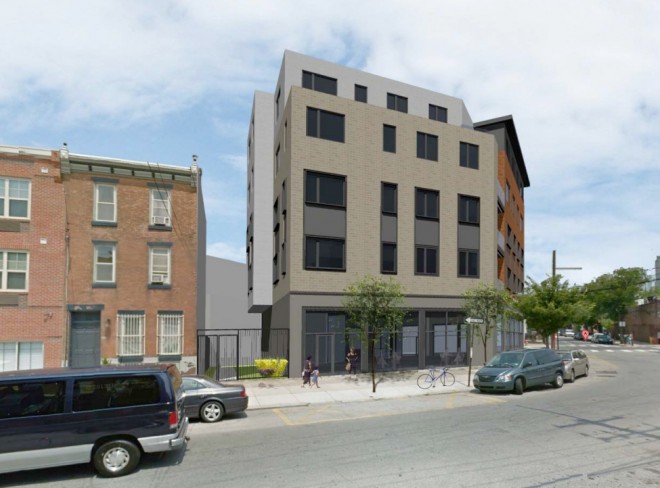 This evening in G-Ho, developers will introduce plans for a modern five-story retail and apartment building on the corner of 23rd and South Streets, with a design from the architecture firm Plumbob. 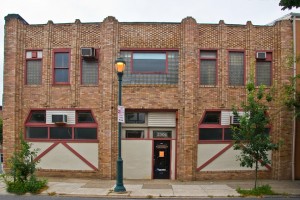 Wrapping in a triangular fashion from South Street to 23rd Street to Grays Ferry Avenue—just across the street from where the three converge at the recently reactivated Catharine Thorn Fountain—the first floor would feature 4,600 square feet of retail space, suitable for two or three storefronts. The upper floors would have 24 one- and two-bedroom rental apartments. Thirty-two bicycle parking spaces, eight outside and 24 in the basement, would also be included. 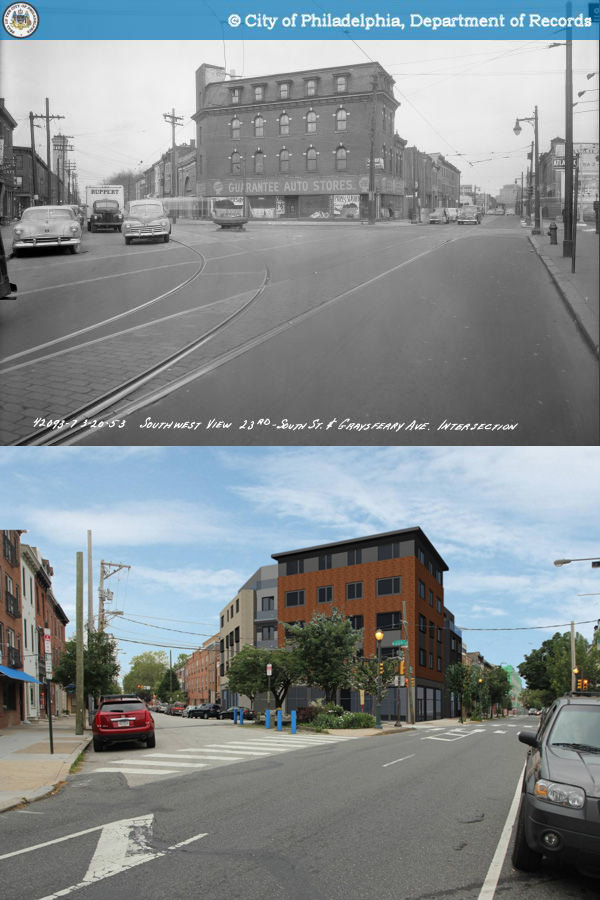 Way before and way after: top image from 1953 from PhillyHistory.org; bottom photo courtesy of Plumbob LLC and 2300 South Street Association LP. Note Catharine Thorn Fountain in each. (Click to enlarge.)

At five stories, the development would be slightly taller than most recent developments in the neighborhood, including the nearby Odunde headquarters and Naval Square townhouses. Proposed at 58′, 2300 South would be 20 feet higher than the 38′ currently allowed by right, thereby requiring a zoning variance. A demolition permit would also need to be pulled for the handsome, but not historically protected, two-story building which fronts both South Street and Grays Ferry Avenue. Though it resembles a firehouse, the Grays Ferry portion of the building was once home to a theater.

Led by Howard Steinberg and Timothy McDonald, Plumbob is the architectural component of Onion Flats’ development/design/build collective. Their five-story design would bring contemporary architecture to a neighborhood flush with new development but saddled with trite, imitative design. “[Plumbob’s design] is our way of contributing to the ongoing improvement of the neighborhood,” says Nusbaum, whose South Square Market sits diagonally across the street from the property, and itself has improved steadily since Nusbaum’s purchase in 1998.

Neighborhood chatter has led to speculation of a Starbucks deal for the first floor retail space. Similar rumors saw Starbucks moving in at locations currently occupied by The Igloo frozen dessert shop and Dollar General. Of this rumor, Nusbaum says, “I have no doubt that a Starbucks would be successful, but it would be putting the cart before the horse to market to any retail before we even have [zoning] approvals.”

The South of South Neighborhood Association’s Zoning Committee meets at the Shiloh Baptist Church, 2040 Christian Street, at 7pm this evening. The 2300 South Street plan is the first item on the agenda. For more info, visit the SOSNA web site HERE.