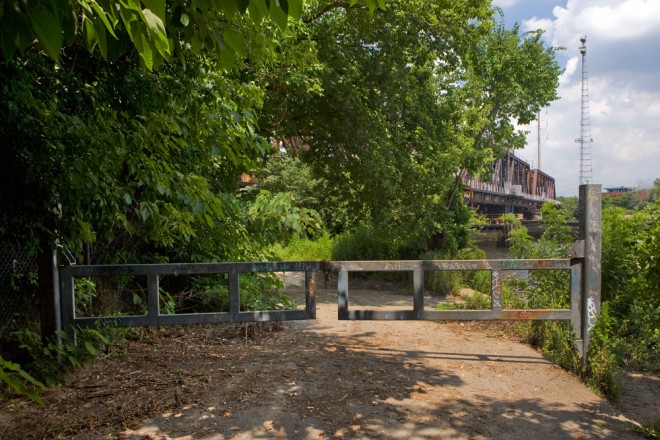 The view to the next phase of Schuylkill Banks development will become a little clearer this evening, as the City Department of Parks and Recreation, the Schuylkill River Development Corporation (SRDC), the landscape architecture firm Andropogon, and Penn Praxis present the first of two civic feedback sessions this week on Bartram’s Mile.

Extending the Banks from the Grays Ferry Crescent south to 58th Street, it’s expected to open in 2015, the last year of Mayor Michael Nutter’s administration, which has leaned heavily on sustainability and green space initiatives. It’s especially exciting considering the Crescent is barely a year old, the boardwalk from Locust Street to the South Street Bridge is well under construction, and the popular Art Museum to Locust section hasn’t even turned ten.

“When this opens,” SRDC director of capital programs Lane Fike says, “people will be able to ride their bikes from Center City and beyond, down the trail and boardwalk, across South Street Bridge, through Penn’s campus, down through the Crescent, to Bartram’s Garden.” The Penn portion is only temporary, as eventually, the aim is to connect the South Street and Crescent portions along the Schuylkill Riverfront, which requires the cooperation of multiple property owners.

Multi-party collaboration has been a constant throughout the development of the Schuylkill Banks. For the Bartram’s Mile portion, plotting the path of the trail has meant the enduring collaboration of SRDC, Parks & Rec, and Philadelphia Industrial Development Corporation (PIDC), who own a number of properties along the river, including the National Heat and Power site under the Grays Ferry Bridge, the 49th Street Terminal, and the former US Gypsum site. The City’s Streets Department and the Houston-based Plains Products Terminals own and operate two other parcels, with Bartram’s Garden the final property in the projected path. The oldest botanic garden in the country, Bartram’s Garden is City owned, operated in conjunction with the John Bartram Association.

Perhaps the most pertinent part of the project rests on the reactivation of a swing bridge which hasn’t been touched in 37 years. The Philadelphia, Wilmington & Baltimore Railroad Bridge No. 1, built in 1902, was abandoned by Conrail in 1976 and has been left in the open position ever since. As proposed, the bike-pedestrian trail will cross the river via the swing bridge, raised and placed back in the position perpendicular to the river, parallel to the Grays Ferry Bridge. 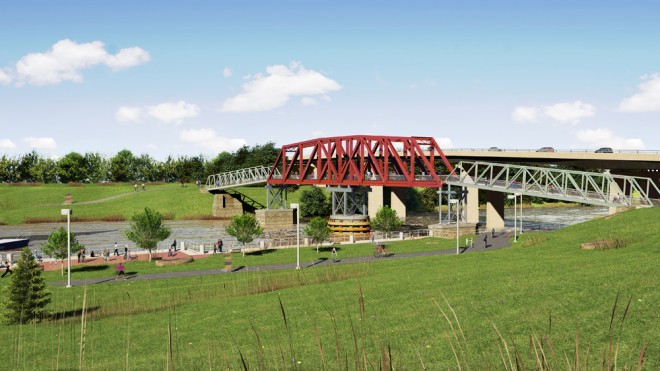 “The swing bridge is critical to the success of the Mile,” Fike says. “We don’t want to create a beautiful green space that’s a dead end or a challenge to get to.” The new bridge, estimated to cost between four and seven million dollars, will carry a high pedigree, with storied Ammann & Whitney behind its design. One significant challenge to its construction is its low clearance. The adjacent Grays Ferry Avenue Bridge, built in 1976, and the Schuylkill Expressway Bridge, built in 1956, each have clearances of 50′; University Avenue, from 1930, is a bascule bridge that opens. The ped-bike crossing on the swing bridge will use only 35′ of clearance. While the lower Schuylkill is a navigable river, large boat traffic is limited to barges requiring access to the Trigen Plant at Christian Street, and should be able to clear 35′. Fike indicates discussions to resolve the issue with the US Coast Guard are ongoing.

On the western end of the refurbished bridge, another renovation will surely delight Hidden City readers: the Newkirk Viaduct Monument. Among the proposals for Bartram’s Mile, the 175-year-old obelisk, designed by Thomas Ustick Walter to commemorate the first permanent bridge at Grays Ferry—the Newkirk Viaduct, built by the Philadelphia, Wilmington & Baltimore Railroad and named for its president Matthew Newkirk—will at last be placed at its original location. For years, it’s been hidden in obscurity behind weeds and graffiti along Amtrak’s Northeast Corridor.

Rich Lobron, Amtrak’s chief of Northeast Corridor infrastructure development, is happy to see interest in the monument. “We’d considered moving the obelisk to 30th Street Station, sprucing it up and making it more visible,” he says. “But this makes more sense [at its original location], especially if it beautifies the walk at the [swing] bridge.” 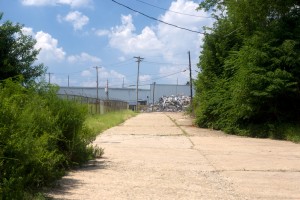 The landscape at 51st Street and Botanic Avenue isn’t much to look at—yet | Photo: Bradley Maule

From the monument, the trail will wind along the river, to Botanic Avenue behind the Streets Department site, down 51st Street and under the 1910 CSX Railroad Bridge, to meet up with the existing trail through the meadow at Bartram’s Garden. The former Warner Building Materials Company site—the “Warner Tract”—has, after remediation, become a large part of the Garden’s identity, popular with birders and fishermen who use Parks & Rec’s new dock at the foot of the meadow. The juxtaposition is not lost on the City.

“One of the interesting things happening here is that you have one of the foremost botanist operations in the country, buttressed by such environmental and remedial concerns,” says Chris Dougherty, a planning and development specialist with Parks & Rec. “We’re looking at the Warner Tract as a success model.”

Following the trail above the meadow and along the outer edges of the Bartram’s Garden property, so as to not disturb its habitats, it eventually passes the restored wetland on the southern end of the Garden, at the currently-unimproved 56th Street. Along the route, various bike racks, restrooms, overlooks, fishing platforms, interpretive signage, and public art will dot the landscape. The foot of 56th Street, at the Schuylkill River, will feature a Plaza Point Public Gathering Space, as described by Andropogon, the landscape architects and ecological planners behind the Mile’s conceptual design. 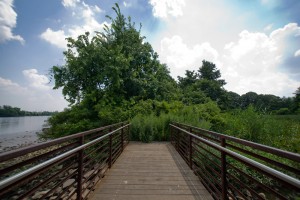 The footbridge at the restored wetlands gets you really close to nature | Photo: Bradley Maule

The property along the river between 56th and 58th Streets, the former US Gypsum site, is owned by PIDC, who views it as a crucial site. “We’ve finished remediation on the south [US Gypsum] site, and we’re in the permitting stage with the Department of Environmental Protection now for remediating the north [National Heat and Power] site, in hopes to start work in 4-8 months,” says PIDC senior real estate manager Kate McNamara. “These sites are part of a new innovation district in our Lower Schuylkill Master Plan; we view the trail as key to our project.”

The stakeholders are many and collaboration is a challenge, but Bartram’s Mile marches closer to reality. Southwest Philadelphia residents and Schuylkill Banks users alike are encouraged to come out to both civic feedback sessions, organized by Penn Praxis. This evening’s is from 6–8pm in the Bartram Village Community Room, 5404 Gibson Drive (the same turn off of Lindbergh Boulevard as that for the Garden); Monday’s session is in the Coach House at Bartram’s Garden, also 6–8pm. Dinner will be served at both sessions.