A Visit to “Kamelot” 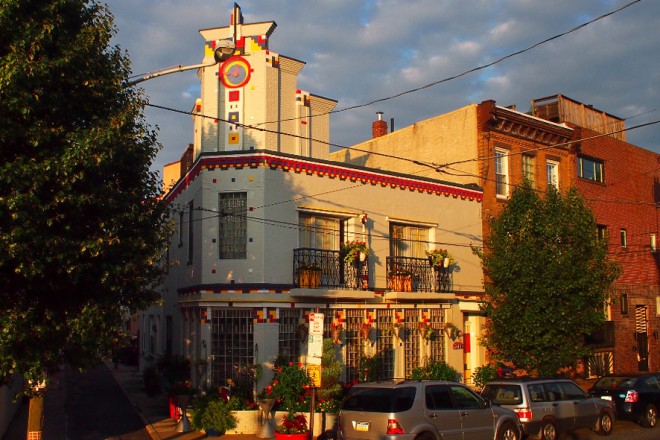 A few months ago, Maxine Segal Kam was walking her two dogs on South Street near her Queen Village neighborhood.  As she strolled along, a stranger stopped her in mid-stride by saying, “I love your sneakers.”  The sneaks – featuring a mix of bold, bright colors – reminded this tourist of a house that he had just seen a few blocks away – so he said so.  “Well,” Maxine replied with a smile, “that happens to be my house.”

Maxine and Michael Kam bought their home, which neighborhood people alternately call “The Clock-Tower House,” “The Mondrian House,” “The Art Deco House,” or “The Lego House” nearly 30 years ago, in 1984.  The building started its life around 1918 as a “mom and pop” delicatessen/grocery store on Fitzwater Street.  In those days, Queen Village was far from “gentrified” – it was a working-class neighborhood. In fact, the two-story deli/store had living quarters upstairs.

Now, it so happened that across the street from the deli was a small cap “factory.”  This little operation, where seven or eight workers sat at sewing machines, belonged to a Mr. Samuel Tannenbaum.  And above this factory, many years ago, Maxine Kam’s father was born.  You see, Samuel Tannenbaum was Maxine’s grandfather.  Strangely, this had nothing to do with why the Kams, decades later, bought their home.  Maxine, who grew up in West Philadelphia, had no particular memory of the building that she now calls home – and no interest at all in living in Queen Village.  Fate, however, had other plans.

In the early 1980s, an architect named David Beilman decided that the up-and-coming Queen Village neighborhood was a good place to get really creative.  And a former grocery/deli that happened to be available seemed like a great candidate for some artistic flair.  After all, its interesting, triangular shape and two wrought-iron, “Juliet” balconies commanded attention. Since all of the other buildings on that side of the street had three stories, Beilman and the property developer concluded that this structure should be given more height. They decided to add a clock tower and a roof deck accessible from a spiral stair through a skylight hatch.

The clock gives the impression of being an original feature – and it has become a Queen Village landmark.  “I was able to use existing brick details to weave the brick tower into the design,” says Beilman.  “It was backlit and ringed in a dark night blue, as the moon at night, and ringed in yellow, as the sun with a comet’s tail during the day.  It made people smile.  It was Art.”

Beilman was also able to transform the grocery’s large, street-level windows in a way that provided an interesting visual experience for those indoors.  Ordinary glass panes were replaced by “glass block” that, Beilman says, “allowed privacy…while amplifying light, color, and motion from the street.”  Maxine Kam compares the effect to that of an impressionist painting, and she feels that this was an inspired change.  The architect credits his associates (including his brother, Karl) with helping to come up with various ideas and themes.  There was a strong use of geometry throughout that helped to create Art Deco references. Colored tiles were put to good use in both the interior and exterior.  But since this was the mid-1980s, not the late 1920s, the original color scheme – favoring pastels – came straight from the wildly popular TV show, Miami Vice.

In 1984, the Kams had just gotten married, and they were looking for a house.  One morning, Maxine’s phone started ringing – various friends wanted to tell her about a house they’d seen featured on the local TV program AM Philadelphia. According to Maxine, the conversations went like this:  “‘I know you’re looking for a house.  I saw a house this morning on TV – I’m telling you, this house was built for you!  It was as if you commissioned [it] – it’s colorful…’ and then they said, ‘It’s in Queen Village,’ and I said, ‘That’s really an area that I’m not particularly interested in.’” Maxine wanted someplace more convenient – perhaps Center City – certainly not the neighborhood that her dad had spent the first 21 years of his life trying to escape.  However, once she and Michael saw the house, they were “sold.”

The couple soon started adding unique features inside that rivaled those outside.  A dramatic, main staircase greets visitors, with bright, red, leg-like balusters suggesting movement; inspiration sprang from the Rockettes and from Marcel Duchamp’s Nude Descending a Staircase. The room’s light is filtered through glass items displayed against the windows, bottles, plates, vases, figures, and decorative stained glass in bold primary colors.  Looking further, one sees miniatures of people from days gone by, many reflecting Jewish life, as well as displays of early 20th century household items and glass seltzer bottles.   Pillows, prints, and furniture reflect Picasso, Mondrian, and Chagall – as well as “Memphis” style design. Everywhere there is a feeling of art combined with warmth and vitality.

The Kams’ inclination towards bold, primary colors eventually spilled outdoors – so, 15 to 20 years ago, the Miami Vice look had to go.  After much research, Maxine and Michael found a resin-based paint that would change pastel tiles of “sun, sand, and ocean” hues into tiles of bold red, yellow, blue, white, and black.  And each year, Michael Kam’s flair for gardening has resulted in the blooming of an abundance of multi-colored flowers. The Kams have added to the beauty of Queen Village while making this home truly their own. “We live in a world that’s so gray and black and white,” Maxine says.  “And then, there’s this burst of color [here] – I love that very much…even on a gray day…it might be bleak…but I open the front door, and there’s color and life…the house remains young, and makes me feel that way.”

Vickie M. Feldman A lifelong Philadelphian, Vickie M. Feldman is a writer, photographer, and educator who has always enjoyed finding out about the hidden (and the not-so-hidden) gems--both places and people--of her home town (and sometimes beyond), and then communicating this information to others in a creative way. As the former associate editor of the Rittenhouse Square Revue and as a writer for other publications, she has interviewed or reported about artists and art exhibits, filmmakers and film collectors, musicians and musical instrument makers, and preservationists, and inventors. (Photo: Tom McKean)