Why Are We Abandoning Germantown? 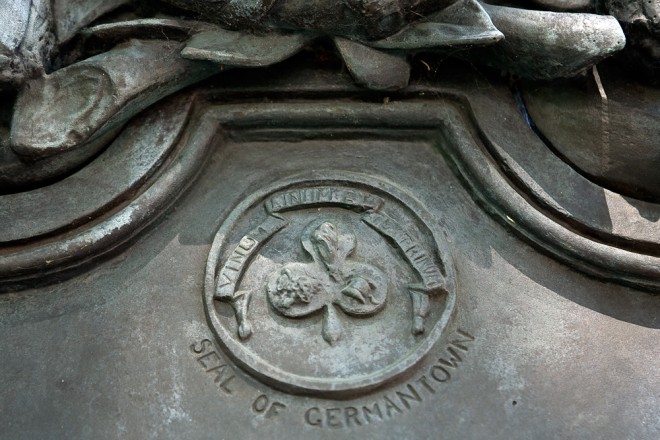 I came to Germantown as an observer and a reporter for the first time around 1999 as I worked on my first book Song of the City; I came to know the people of the tiny enclave of Blue Bell Hill and to learn of their particular resilience and love for the natural and human geography of this most magnetic place. I spent hours with the multi-generation Germantown family of Kathy Palmier, who defied her own personal pain as a victim of violent crime to raise her family there.

In that book, I describe the prosaic–and yet powerful–rhythms of Germantown and Chelten, the poultry butcher’s line at the old farmer’s market next to Town Hall, the sidewalk tables of Maplewood Mall, the whispers of 18th, 19th, 20th century history in every corner.

I’ve returned again and again–to visit friends, to walk and talk with the great urban historian Tom Sugrue, to consider the future of Wayne Junction, to envision and understand the place in 1821, as it would have felt to the characters in my forthcoming novel Lion and Leopard, to bring my daughter to her classes at the Philadelphia School for Circus Arts, to explore the potential of Germantown’s vast architectural record, to drive around with developer Ken Weinstein trying to analyze the place through a developer’s eyes, to scout the abandoned Town Hall as a site for the 2013 Hidden City Festival.

Always, I have been struck by an overwhelming feeling of awe for a place so unique in the city, as beautiful as any of the great urban districts in the world. 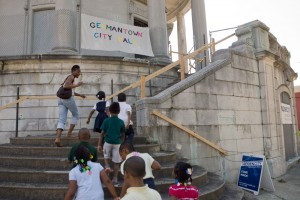 Come in while you can | Photo: Bradley Maule

Yesterday, I stopped by the remarkable Town Hall, closed in 1997, and at least temporarily transformed into a hive of neighborhood planning–the project called Germantown City Hall by its organizer, the artist Jacob Wick. Now, for two more weeks of the Hidden City Festival, you can find yourself on the great portico, or in the monumental rotunda, or sitting at a desk in perfectly proportioned meeting room talking with neighbors. You might water the new garden or make some art; you might look up and wonder about the money and energy and vision it took to erect a public building meant to serve the interests of the people.

For all around Town Hall, all that focused energy is quickly–violently, it seems to me–dissipating. The view from Town Hall’s portico is disturbing: there is ruins of the Germantown YMCA just down the block next, fire damaged and likely to be torn down; to the southeast, the empty, evocative St. Francis of Assisi Catholic Church, closed last year; the loss of the business improvement district to corruption, the dozens of empty storefronts that drift down the avenue past Vernon Park, the seemingly impossible task of organizing a community development corporation heavyweight enough to attract City funding. 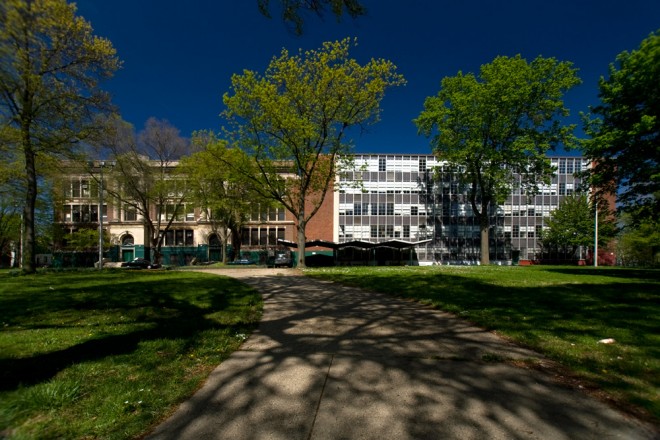 And Germantown High School, right across the avenue from Town Hall, is, at the end of today, closed. The problem of public school funding is a difficult one; this is of course only one of 23 schools being closed, one of 23 corners being abandoned and left to time. And certainly, the city doesn’t evolve rationally–the management of decline and uneven renewal is a task for Sisyphus, not for a deeply fragmented and politically provincial municipal government.

But the shuttering of Germantown High School–a massive complex of buildings and courtyards–is no simple school closing. It’s the tearing out of the neighborhood’s heart.