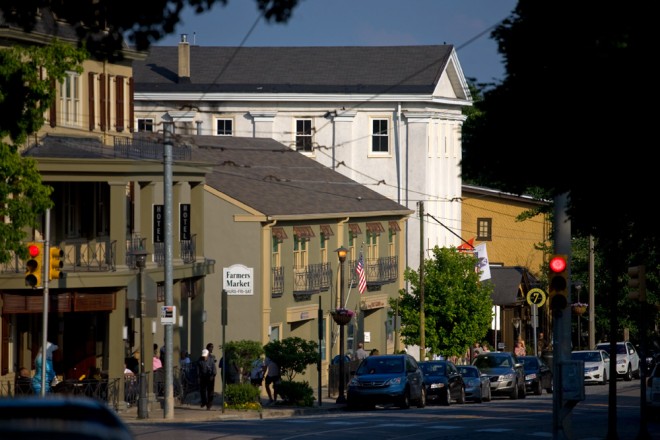 In Pennsport, the dust is settling from the leveling of St. John the Evangelist, built in 1867. At Broad and Wharton, new dust is about to kick up, as the wrecking ball swings toward the enormous 1886 Broad Street Armory. Demolition of Philadelphia’s historic structures is so common that Hidden City publishes an annual “Lost Buildings” list, and we’ve got our eye on still more which seem on the verge of extinction. But in Chestnut Hill, the preservation of one building—even as demolition had begun—was so important to its community that the effort resulted in a historical society that still thrives today.

In 1966, Veterans of Foreign Wars Post 5205, at 8217-19 Germantown Avenue, was suffering from crumbling stucco, rotting window sills and frames, and a deteriorating roof. The City’s Licenses & Inspections department condemned the building’s top floor and told the VFW they either needed to repair it or remove it. With limited funds and resources, they chose to demolish the third floor and lower the roof. Fearing the loss of the large and striking century-old Greek Revival building, the late community activist Ann Spaeth wrote a letter to the editor of the Chestnut Hill Local pleading for help. The call was answered by a number of concerned citizens, including Shirley Hanson. 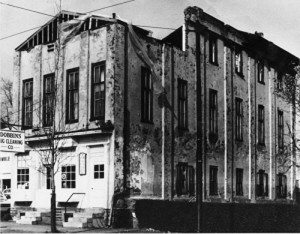 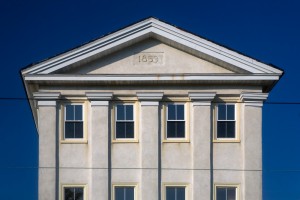 “The VFW scraped together $10,000, which was enough to remove the third floor and renovate the structure to meet city building codes,” Hanson remembers. “We raised [additional] money to rebuild the third floor and renovate the building.” That renovation including hiring architect John Murphy of Murphy Levy Wurman and allocating money for a meeting room, per an agreement reached with the VFW. Murphy’s renovation included the reconstruction of the pediment—and the placement of a new relief marking the year of construction, 1859.

That year, the three-year-old Chestnut Hill Water Company built the stone water tower that still stands on the corner of Ardleigh and Southampton, now a park where then was a reservoir. Water Company president Charles Heebner owned a considerable amount of land in Chestnut Hill, including the plot of land across Germantown Avenue from the oldest building in the neighborhood, the circa-1744 Detwiler House (now the Chestnut Hill Cat Clinic). Heebner commissioned the construction of a tall, three-story building that would, and still does, exemplify “mixed use.” (The architect has been lost to history.)

When it opened, 8217-19 Germantown Avenue’s primary tenant was Hiram Lodge No. 81, Free and Accepted Masons, who occupied the third floor. Christ Evangelical Lutheran Church, organized in 1860, used the second floor for worship services until they opened their own English Gothic church just up the block at 8300 Germantown in 1871. One of the church’s leaders, Orlando Styer, operated a grocery store on the first floor. In its earliest incarnation, the building maintained fraternal, religious, and retail concerns under the same roof.

Constituted in 1800, Hiram Lodge No. 81 is the oldest Masonic organization in Northwest Philadelphia, then Germantown Township. Prior to renting space in Heebner’s building, the Masons met in various taverns and inns, including those in Germantown, Franklinville, and King of Prussia. Their move to the building earned it the simple nickname “Masonic Hall.” After Heebner’s death, his son Samuel Heebner sold the building outright to the Masons, and they inscribed “Masonic Hall” into the pediment, along with the incorrect date 1856.

After the building swap, the Knights of Pythias used the building until activity dwindled. Following World War II, Philadelphia’s Veterans of Foreign Wars had enough members in Chestnut Hill, Mount Airy, and Germantown to form their own post. After receiving its charter from the National Headquarters on January 3, 1946, VFW Post 5205 began meeting in the Knights’ building. With membership high, including veterans of both World Wars, the VFW raised enough money to purchase the building from the Knights on May 29, 1950. 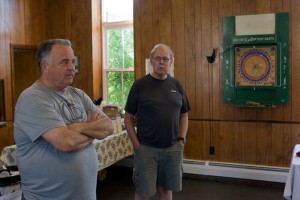 Current Commander Jack Leaming, a 10-year US Navy veteran of the Vietnam era, describes the VFW as a sort of support group. “World War II guys were very proud and stoic,” he says. “Coming home from war, a lot of guys would have what was then called ‘shellshock,’ where now PTSD is taken very seriously.”

Jim McCafferty, VFW Commander prior to Leaming, attributes this perspective to differing types of war. “World War II was a ‘good war,'” he explains. “Vietnam, Iraq—everything really since then has been police action; some of these guys come back with real scars.”

This introspection carries over to the Hall’s décor, whose any-town wood paneling includes framed posters of Operation Desert Shield, Lee Teter’s famous Vietnam Reflections, and a Vietnam scene with a lone soldier standing on a fiery hilltop with a helicopter and a concise caption, “Take Me Home.” With soldiers still stationed across the world, the need for a “support group” still exists, and on the third Thursday of every month at the VFW Hall, local vets still gather, often recalling war stories and reminiscing about old days in the neighborhood. 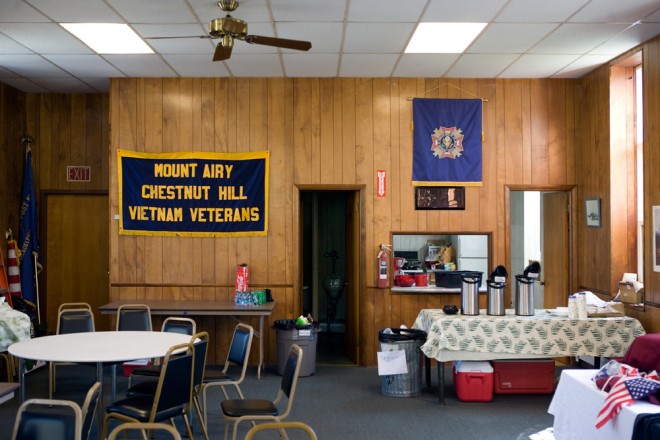 The drop ceilings and wood paneling could be the home of any VFW | Photo: Bradley Maule

“In the old parades, everyone would come out to see the tanks would roll up Germantown Avenue,” McCafferty remembers. “They’d rip up the cobblestones and whole sections of the avenue would have to be redone—but that was okay because they were World War II guys!” 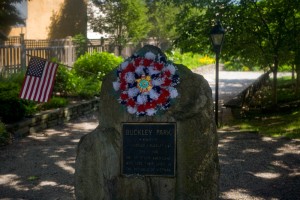 In 1968, members of the Post brought home the body of US Marine Charles Buckley, killed in combat in Vietnam. In 1973, a few doors down the Avenue from the VFW Hall, Buckley Park was dedicated to the memory of Buckley and “other Americans who gave their lives in the Republic of Vietnam,” one of the first Vietnam War Memorials in the country. The Post still volunteers at the park and places a wreath on Memorial Day and Veterans Day.

As to the future of the Post, they’re just trying to keep it going. “This organization—you don’t get paid for it,” Leaming explains. “You just do it for the honor of the old guys, and really, for the greater good.”

Rent from the first floor tenant helps, of course. For decades, Dobbins Oriental Rug Shop occupied the street level storefront. Six years ago, they relocated, and since then, Chestnut Hill’s floor business has gone through Rug Rack. Incidentally, the most notable thing about the store outside of its Persian, Afghan, and Turkish rugs and tapestries, is its restored hardwood floor, the building’s 1859 original. 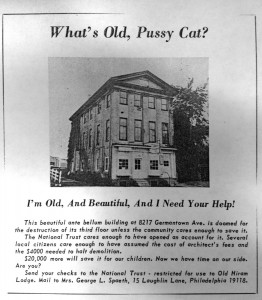 Topical! The 1966 rally to save the VFW Hall channeled the Peter Sellers film (and Tom Jones song) from the previous year | Image: Chestnut Hill Historical Society

That floor likely wasn’t even a consideration in designating the VFW Hall as historic, which the Philadelphia Historical Commission did in 1966, largely through the grassroots efforts of the neighborhood. “[The building] holds a special place in our hearts,” Shirley Hanson says. With Ann Spaeth rallying the preservation, Hanson volunteered weekly articles to the Chestnut Hill Local on the effort. Along with others, including Nancy Hubby of the Chestnut Hill Realty Trust, they formed a new Committee for the Preservation of Historic Buildings in Chestnut Hill.

“It was hard work under pressure to go back again and again to the community to raise the needed funds,” Hanson recalls. “It was exciting, though, to feel the community’s appreciation for its buildings and to start a new community effort.” The Committee ultimately became the Chestnut Hill Historical Society, and the Society maintains a valuable presence in the neighborhood. In addition to the current 20th Century Chestnut Hill exhibition, the Society, at 8708 Germantown Avenue, hosts a thorough archive, a garden collaborated by Morris Arboretum, and a resource center for homeowners. And the Chestnut Hill Historical Society traces its roots to the VFW Hall, the old Hiram Lodge, still standing tall over the Avenue.