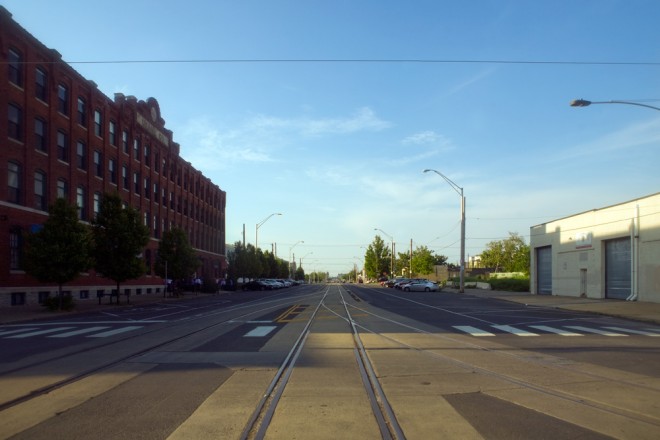 At 6AM on a Friday morning, Chaes Food is bustling. Workers wheel pallets onto the loading docks and pack crates of frozen meat, sacks of rice, and boxes of fresh produce into trucks. Semi-trailers pull into the lot and swing back widely onto American Street. The phone rings constantly. David Park, the manager of Chaes Food, a wholesale food distribution warehouse at North American and Dauphin Streets, has been at work for five hours already, but shows no signs of weariness—business is good.

While the scene at this warehouse is humming and lively, just a few blocks south, the parcels of land that were once home to similar, vibrant businesses are vacant and silent. An empty lot at the intersection of American and Jefferson Streets once housed American Knitting Mills, a woolen hosiery manufacturer, and later F.M. Paist Co. Candy. On the corner of American and Oxford Streets, the former site of a cardboard factory is now split between an empty lot and an Aramark distributor. One block east of American, on North Second Street, Ontario Mills, built in 1882, was demolished in 2007 and today houses another sprawling, vacant lot. These empty plots are currently zoned industrial, despite many neighborhood residents, developers, and business owners advocating for looser zoning codes that would allow for more diverse land use opportunities in a neighborhood that’s seen significant change. 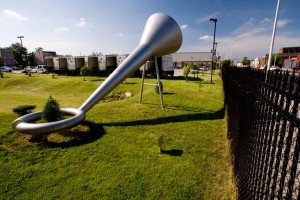 The Assist by Michael Grothusen was commissioned in 2007 at the site of Chaes Food’s new facility | Photo: Bradley Maule

Thinking about the future of American Street means tackling issues that often emerge in an evolving neighborhood: preserve its industrial roots, or allow modern development? Current tensions are rooted in the conflict between pro-industrial forces, who lean on governmental programs to maintain the current industrial zoning, and developers and community activists who believe the neighborhood is better suited to mixed zoning, allowing for light industrial, commercial, retail, and residential uses. Now, with development pressures creeping up north from Girard Avenue, the exact future of American Street is uncertain.

Chaes Food is one of the few large-scale industries on American Street to actually expand its operation. The company had opened in 1996 at a different location on American Street and then moved to its current, larger facility in 2007 with financial support from the American Street Empowerment Zone, a federally-funded program that sought to retain businesses and jobs in declining neighborhoods.

In this case, Chaes Food seems to be the exception rather than the rule for businesses of its caliber on American Street. A 2010 Philadelphia Industrial Development Corporation study on industrial land use found that the American Street corridor had transitioned away from being an area well-suited for heavy industrial use. PIDC recommended that the area reexamine its zoning codes in order to support a more mixed-use, commercial, and residential area on the lower part of American Street, between Girard and Berks Avenue. 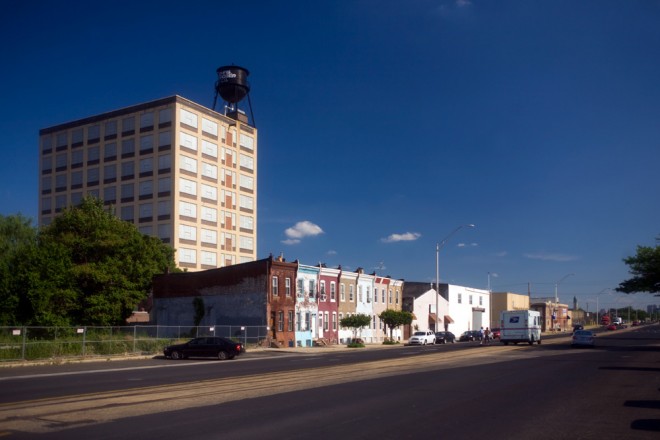 Some portions of N. American Street are already mixed use: the 2000 block shares homes, a church, and just behind it, a massive storage tower | Photo: Bradley Maule

These recommendations were intended to inform the Philadelphia City Planning Commission’s Philadelphia2035 master plan for the city, a comprehensive look at land use trends which makes recommendations and issues development plans for the city as a whole. While the master plan is done, the River Wards district plan is yet to be completed, meaning there just may be an opportunity for more open, public discourse regarding American Street.

“This corridor has been vacant for decades. Large-scale industrial uses are never coming back, and we need to be supportive of other types of uses,” said Leah Murphy, co-chair of the Planning and Zoning Committee for South Kensington Community Partners. “There are a lot of impacts from all the vacancy…It feels unsafe. If it were to be rezoned to welcome other types of uses, it could become a great asset to our neighborhood.”

Indeed, the area north of Girard Avenue in South Kensington has seen many significant changes to the existing fabric of the neighborhood, and the pressure to develop unused land is making its way to American Street. Community gardens and urban farms like La Finquita—three blocks west of American Street—have sprouted up in abandoned lots, providing the neighborhood with sustainable green space and locally-grown produce. El Cafeito, a quaint cafe with patio seating at North Third and Cecil B. Moore Streets opened last year. The newly opened 3rd Ward, located a few blocks west of American Street on North Fourth Street, offers instructional classes for aspiring artists and craftsmen in a communal space. 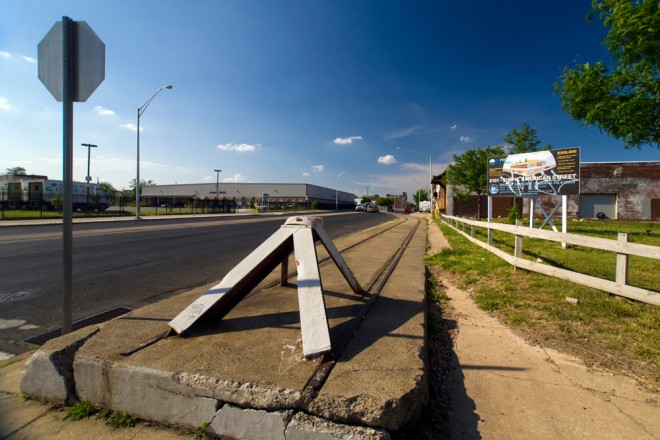 In the 1870s, American Street was home to a Philadelphia and Reading Railroad route, which fostered the growth of industrial activity and spurred commerce. Coal yards, repair shops, and delivery and freight depots commingled with factories to shape American Street as a diverse industrial corridor, exemplifying the city’s “Workshop of the World” moniker.

But by the 1960s, Philadelphia had succumbed to devastating deindustrialization—between 1963 and 1992, the city lost 62 percent of its industrial firms. (Plan Philly, 2010.) As multi-story factory lofts shut down and the city experienced staggering population losses, Philadelphia was no longer perceived as a viable center for industrial growth. American Street was heavily affected.

Yet the zoning codes on American Street have remained the same as they were during the industrial boom years. Advocates for non-industrial development believe that current zoning conditions on American Street, which bisects a rapidly evolving neighborhood, are preventing the rest of the area from becoming cohesively developed, stunting the potential for a more positive quality of life for residents.

“It’s cut their community in half. Anybody who’s been paying attention to Northern Liberties, Olde Kensington, and Fishtown has seen a tremendous amount of growth and that growth is happening organically,” said Paul Rabinovitch, vice president of Canus Corporation. Canus is responsible for the Soko Lofts, a $70 million project comprised of a 320-unit mixed-use apartment complex at the former Absco Inc. steel site at Second and Master Streets. The Philadelphia Planning Commission approved plans last week to rezone the parcel from industrial to mixed-use.

Denis Murphy, the manager of the Business Improvement District Programs at the Philadelphia Department of Commerce, began working with the American Street community 10 years ago as an administrator for the American Street Empowerment Zone. Philadelphia received $79 million to split between three neighborhoods, one of which was the American Street industrial corridor. The money was used to grant low-interest financing, tax credits, and other inducements to businesses moving onto the street.

David Gleeson, co-founder of Crane Arts and longtime resident of South Kensington, said that while the original Empowerment Zone legislation was an optimistic plan at the time, a commitment to reindustrialization is no longer realistic. “In that process, the way industrialization was described and imagined became quite strict,” Gleeson said. “The hope was that if we can get enough industries to commit here, we’d have a really industrial zone. I think the businesses that did come here expected things to evolve in a different direction.”

Denis Murphy emphasized that the variety of industrial businesses along this corridor is not despite of, but because of the industrial zoning designations. He cited the Aramark distribution center, William Proud Masonry Restoration, COFCO corporate office furniture, and Marguerite Rodgers interior design firm as successful examples of American Street’s diversity. By keeping American Street zoned as-is, and by discouraging new residential developments like the Soko Lofts, Murphy believes it would preserve what attracted residents to the American Street corridor in the first place.

“Looking at trends, where you had real demand for new high-end residential buildings, that ends up squeezing out some of the stuff that made [the neighborhood] interesting,” Denis Murphy said, comparing the plans for the Soko Lofts to a smaller-scale Piazza. “You lose that diversity that people liked. Fifteen, twenty years ago, a lot of distribution type firms in Northern Liberties and along the Delaware were lost to Camden or the suburbs. Those industries aren’t appreciated until they’re gone.”

He also noted that the “industrial” designation is broader than one might think, and shouldn’t necessarily conjure up images of smokestacks, heavy traffic, and pollution. In the case of American Street, it can include small-scale crafts workshops. 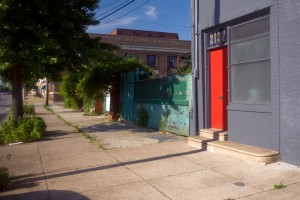 One such American Street artisan is Justin Kumpf, owner of Lightfast Build, a custom fabrication and metal finishing company founded in 2011. Kumpf noted a “resurgence in local manufacturing, custom made goods,” and feels that his location on American Street—directly across from Chaes Foods—is conducive to his craft. Kumpf supports a development like the Soko Lofts, but expressed a reservation that its presence would increase property values in a way that might push longtime residents out of the neighborhood.

Many advocates for development, and even some large-scale industrial business owners like Park, don’t believe that the rezoning of American Street or the construction of the Soko Lofts would adversely affect the old guard industrial entities on the northern section of American Street. Park said that he would not only welcome the lofts, but would support additional mixed residential and commercial development in lots that have long been vacant.

“I’d rather see some sort of store or plaza than see a junkyard space,” Park said, gesturing to a vacant lot on Diamond Street. “That’s an eyesore if you ask me.”

There are other points of tension that go beyond the aesthetic of the sprawl and vacancies American Street itself. One reason the area was zoned industrial was so businesses like Chaes Foods could carry on operations at 4AM without disturbing neighborhood residents. Would the increase of residential structures on American Street make it impossible for old guard industrial businesses and new residents to coexist? 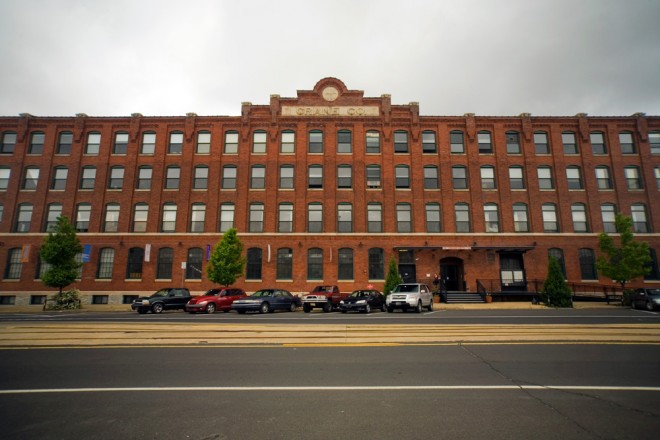 Gleeson believes that some common ground can be reached with regard to the future of American Street. “If we’re still allowing everyone who’s been here to continue to do what they’re doing, but making it possible for other people who would like to come here to do the same as well—I don’t think it sounds utopian, I think it sounds realistic,” he said.

Standing in the foyer of Gleeson’s Crane Arts, a 100-year-old building that once housed Crane Plumbing Company, it’s impossible to ignore the historical forces that not only shaped the neighborhood, but the city as a whole. And it might be possible to reconcile the past with the future for the benefit of the city.

“A hundred sixty years ago this was an amazing fabric of industrial buildings alongside residential buildings and suppliers,” Gleeson said. “I feel like if they could make it work then, we can make it work now, and it’d be a great re-expression of what was always great about Philadelphia.” 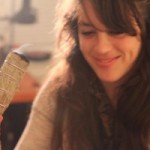