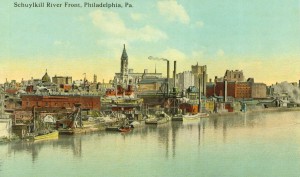 City Hall Tower and the dome of the Cathedral of Sts. Peter and Paul are visible in the background of this early postcard, which shows the Schuylkill River’s east bank just a bit south of the site of Paine’s Park.