Testing And Proving Building Innovation At The Navy Yard 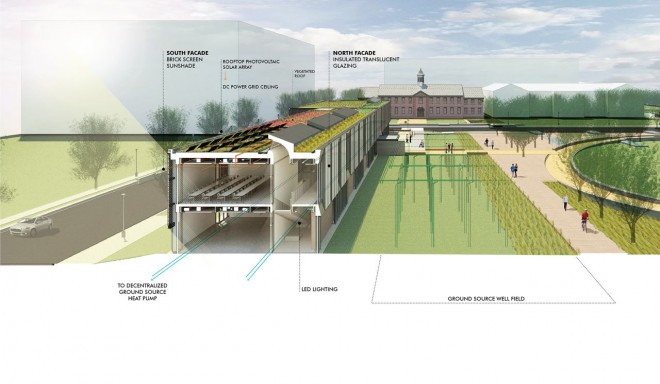 Looking forward by way of history at the Navy Yard: EEB Hub | Image courtesy of KieranTimberlake

Philadelphians spend 29 percent more on energy costs in commercial buildings than Americans do on average and energy spending is only higher in New York City, Washington, DC, and Boston. The Energy Efficient Buildings Hub–know as the EEB Hub–headquartered at the Navy Yard, wants to change that.

The federally-funded 27-member consortium led by Penn State University was the first Energy Innovation Hub created by the Obama administration. The goal of the project is to develop affordable tools for design, construction, and operation that will significantly reduce energy waste–and therefore costs–in commercial buildings under 250,000 square feet. Now, several years after its launch, the EEB Hub will try to prove its point by creating two demonstration projects–one retrofit and one new construction–on the Navy Yard campus. Both buildings, substantially funded through state grants given to Penn State during the Rendell administration, are expected to be open by spring 2014.

The project’s intent is to reach the architects, engineers, real estate developers, and building contractors involved in building medium scale commercial and residential buildings across the region and by 2020 to reduce energy consumption in commercial buildings region-wide by 20 percent. 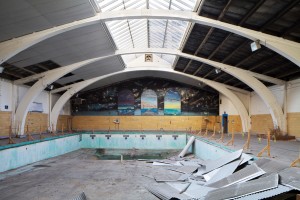 The first of the demonstration buildings, Navy Yard Building 661, will also serve as the EEB Hub’s headquarters. It’s an adaptive reuse of a former officers’ recreation hall shuttered in 1995. The project there, designed by architects KieranTimberlake, will ostensibly demonstrate how to retrofit a building to make it more energy efficient at the same time. At present, Building 661 is a shell of its former self, but like a caterpillar in a cocoon, it will emerge from this state an entirely different beast.

“Because this is a demonstration project, it became clear to us that this was an opportunity to create an architecture that would provide ‘infrastructure’ for the didactic display of several mechanical approaches and to foster the seamless collaboration among EEB Hub’s task teams,” says David Riz, KieranTimberlake’s principal architect in charge of the EEB buildings. “Therefore, our work as architects on this project is less about detailing and materials and more about identifying impactful changes, such as removing a central wall to create a large day lit atrium, and inserting a new mezzanine for meeting space that also serves as an armature for mechanical systems.”

Think of it as a 38,000 square foot petri dish that researchers will work in and study at the same time.

Riz also says that the focus on energy efficiency–from HVAC and lighting to automatic energy-saving controls and sophisticated double glazed windows that can help regulate heat–isn’t meant to showcase the most expensive state-of-the-art equipment. “We established a mandate to use ‘state-of-the-shelf’ technologies that are easily replicated by the commercial building marketplace so the building can be learned from,” he says. 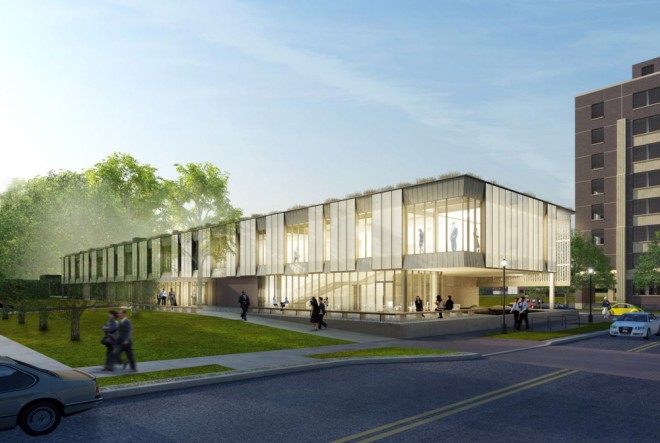 Across the street from Building 661 is the second demonstration project, a new Penn State building known as Building 7R, or the Center for Building Energy Education and Innovation. The 25,000 square foot facility will house education and training programs and will feature various kinds of solar panels, an integrated stormwater management system with a green roof, high efficiency ground source heat pumps, and a charging station for electric vehicles.

Both buildings will be lit during the day by controllable natural light, a system designed in consultation with the firm Atelier Ten. Riz says artificial lighting is a major source of energy consumption.

While it’s easy to understand how material changes can have a substantial impact on energy savings, the project’s engineers are also attempting to transform the design and construction process. “The building construction industry is very fragmented,” says EEB construction manager Steve DiBartolo, with 32 years experience in the industry. “There’s the owner, there’s the architect, there are lots of different design consultants–mechanical engineers, electrical engineers, civil engineers, geotechnical engineers–there are contractors, there are subcontractors, and there are manufacturers. They all have different business models and they all have ways of making money. Not everyone has the same goal as the owner. There are so many players with so many interests. An integrated process can cut out a lot of that.”

On the two demonstration buildings, that means all the firms involved, from the general contractor Balfour Beatty to landscape architect Studio Bryan Hanes to engineer Bruce Brooks to plumbing contractor Dolan, Inc., have to adjust their design and building approach.

“What we’re trying to do is bring everybody in earlier, bring the contractors in during the design to help the designers,” DiBartolo says. “Kind of look over their shoulder and say ‘well, in the field we wouldn’t do it this way, it’s not constructable the way you designed it’.”

Getting stakeholders on board early on in the project sounds logical, but according to the EEB Hub staff I’ve spoken with, it isn’t common practice. Their aim is to put key players in rooms like the Immersive Construction (ICon) Laboratory, a room with 3D and 4D projection screens, which allows stakeholders to get together on a project and do a virtual walk-through. This way changes don’t happen on an ad hoc basis during the construction phase, but are instead actively planned out before any of the heavy equipment gets on site.

DiBartolo thinks that through proper planning the project will help building owners save money. They just don’t know by how much. “There’s not enough information to say what the average savings would be but we aspire to save 10 to 15 percent of total project costs or to move ten percent from the soft side (planning/design) to bricks and mortar,” he says. 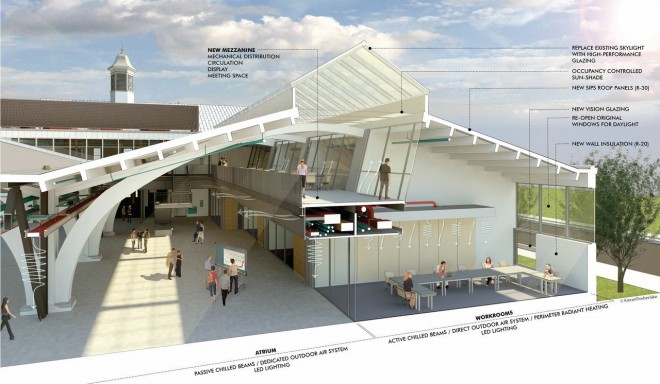 One enticing bit of evidence is that the EEB Hub is itself benefiting from the integrated process. Says Riz, of KieranTimberlake, “following this process allowed the team to expand the project from the original scope, which included a renovation and addition, to a renovation plus a new building and landscape. This was achieved without adding cost or time to the project.”

Riz is convinced that the integrated process can and should be adopted on a wider scale. “We believe the integrative process is for everyone, but do understand the perception especially for small-scale projects that the design fees for what is an intensive process can be too high, particularly in early design phases,” he says. “In the integrative process, the team remains focused on the overall project costs, not the hard and soft costs as discrete numbers. This attitude needs to be adopted at a broader scale.”

But will people adapt to use this design process–and what are the obstacles?

“I think the challenges are more economic–we have high development costs and not a very strong real estate market like New York or Washington where the market is stronger for the owner, where it’s a much easier value proposition to make the investment upfront. Here, the payback is mushier,” says EEB Hub deputy director Laurie Actman. 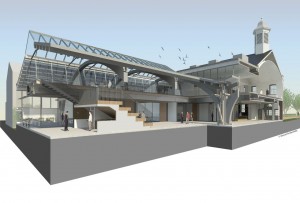 She hopes the EEB Hub will prove that technology and the integrative process are worth investing in and that real, measureable cost savings can be made within a practical timeframe.

Time and money are issues which the EEB Hub itself has to deal with too. In 2011 officials announced that the EEB Hub (then known as the Greater Philadelphia Innovation Cluster, or GPIC–the name was changed in May 2012) was to be the nation’s first Energy Innovation Hub. The Department of Energy would award it up to $122 million over five years. It has also received another $7 million from several other federal agencies. The DOE guaranteed $22 million for the first year and up to $25 million each year for the next four years, subject to congressional approval.

Its current goal to reduce energy use in commercial buildings by 20 percent by 2020 extends beyond present funding cycle; EEB management has previously stated that it hopes its work can continue into the future. Even that goal, far reduced from the project’s initial hope to “transform the commercial building retrofit process by demonstrating energy savings of 50 percent by 2014 in a scalable, repeatable solution that can be affordable applied to a broad spectrum of buildings,” will be difficult to attain.

Still, the architect Riz thinks the effort will prove its value. The ultimate result, he says, of the two demonstration buildings and of the system the EEB Hub is developing, will be buildings that develop higher value at a lower construction cost.