Recollections Of The Pier 34 Disaster 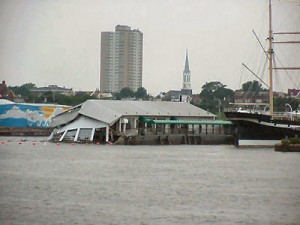 Image of Pier 34 after the collapse, from About.com.

The collapse of the building undergoing demolition onto the Salvation Army thrift shop at 22nd and Market Street brought to mind that another collapse in Philadelphia’s modern history: the collapse of Pier 34 South into the Delaware River in 2000. As with the tragedy last week, that calamity focused unwanted national attention on the city.

As I recall, I was driving home from a multi-day trip on the evening of May 18, 2000, when I exited I-95 onto Delaware Avenue just moments after first responders arrived on scene. Traffic on the roadway was jammed with rescue vehicles lining the Philadelphia waterfront. I specifically remember the frantic faces of paramedics running to their trucks, apparently to obtain some piece of rescue equipment. I didn’t understand what was going on, as Pier 34—called Eli’s Pier 34 since 1992—looked no different from the street.

The Philadelphia and Reading Railway had built Pier 34 in 1909 for use in loading coal onto ships. More than 2,500 yellow pine piles, eighteen inches diameter, were driven fifty to seventy feet into the riverbed. A wooden deck sat atop the piles and supported eight feet of fill dirt with pavement on top surrounded by a concrete seawall. Pier 34 was constructed to support a train track across its length, as well as to withstand bumps from ships in the river. The pavement was then covered with a metal shed. In the 1930s, the pier was open to other shippers, but was still owned by the Reading Railroad. Indeed, much of the Philadelphia waterfront around this vicinity was controlled by the Reading at this time. Independent Pier Company also used this wharf.

The full story of what happened on the pier that night in 2000 was later explained on television, as news of the tragedy was, like that last week at 22nd & Market, broadcast locally, nationally, and even internationally. I got the impression then that the reporting was done in a typically sensationalist manner, as if to highlight that this pier collapse was yet another indication of Philadelphia’s long slide from its proud industrial heritage. 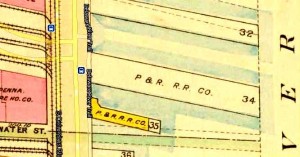 Pier 34 is shown on this 1910 Philadelphia Atlas (Bromley) about a year after its construction.

The far section of Pier 34 had suddenly fallen into the Delaware River, killing three staff members of the New Jersey State Aquarium (now the Adventure Aquarium) and injuring dozens of others. They were partying at Club Heat, a recently-opened outdoor nightclub at the end of Pier 34. The three fatalities, all women, were celebrating a first day on the job, a promotion, and a coming birthday. Darkness, debris, and river currents hampered rescue efforts, as did the threat of the remaining pier’s disintegration.

Watching the TV reports that night also jogged my memory as to what I had witnessed when I stopped by to check out Club Heat only a few days before. I remembered seeing a carpet or rubber mat placed over a large crack on the deck. I also noticed that the pier was actually swaying, almost imperceptibly, with the river current and tide. Generally unimpressed and thinking “no good shall come from this,” I left the place.

The problem was that the pine poles supporting the structure had failed about two-thirds out into the Delaware. Michael Asbell, a lawyer turned developer who was Pier 34’s owner (since 1984), and Eli Karetny, Club Heat’s manager, had evidentially known that the 91-year old pier was in poor condition. In fact, they had been warned repeatedly that the deck was shifting for weeks. The size of a crack went from two to three inches the night before the collapse to nine to twelve inches the day of the collapse.

Pier 34 South is shown on this 1942 Land Use Map (WPA) at a time when the Reading Railroad owned most of the surrounding area.

The pier was already years past its estimated lifespan. Moreover, 180 feet of Pier 34 had already collapsed into the river in 1994. This failure was hastily patched up the following year, but the repair was clearly insufficient as the piles continued to move in the river.

Perhaps I should have said something about what I saw, or reported it to some authority. But I figured that the owners obviously knew about the problem and would correct it. After all, Club Heat had only been open for less than a week, so some renovation must still be going on, right? And given the cost of opening the new club, they wouldn’t let this problem get out of hand, right? I mean, how could anyone associated with the place not do anything about such a large crack in the floor, right?

Well, just as with Hoagie City, the Pier 34 incident was an accident waiting to happen, the result of a property owner’s disregard for safety and the ineptitude of many involved in repairing the dock in 1994 and transforming it into a hotspot in 2000. 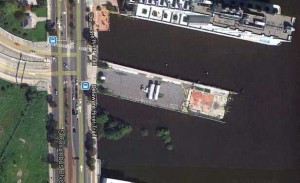 A modern view of a shortened Pier 34 | Image: Google Maps

Michael Asbell, of Merion, and Eli Karetny, of Cherry Hill, were ultimately charged with third-degree murder and other charges, but the jury was unable to come to a unanimous decision. Fearing another trial, Karetny pleaded guilty to involuntary manslaughter and recklessly endangering 43 people who were injured, while Asbell pleaded no contest to involuntary manslaughter, conspiracy, endangerment, and risking a catastrophe. Both men were sentenced to 1,000 hours of community service and from eleven to twenty-two months of house arrest. This was in 2007. Meanwhile, more than forty civil lawsuits were settled for $29.6 million against at least a dozen defendants and their insurers.

To the consternation of the victims’ families, Karetny was released from house arrest after serving the minimum nine months of his sentence. Asbell was released after serving eleven months of his term. According to a 2008 Inquirer piece, members of victims’ family said they believed the sentences were “too light from the start.” Said a victim’s sister: “The girls, their lives mattered, and such a light sentence said their lives didn’t matter.”

Will these words be repeated with the disaster of June 5, 2013?

Following the Pier 34 incident, Mayor John Street called for engineering reports from all piers to make sure they were all safe. City officials called for the regular inspection of piers in the city of Philadelphia. They directed an investigation as to how other cities observe and monitor their waterfront piers. In reaction to Hoagie City, Mayor Michael Nutter has already said the City will implement major permitting changes and random drug tests to heavy equipment operators at demolition sites.

Last year, a developer proposed a two-tower apartment complex for the Pier 34 South site. But for now, its remnants still remain, fenced off, immediately south of Dockside Condominium.