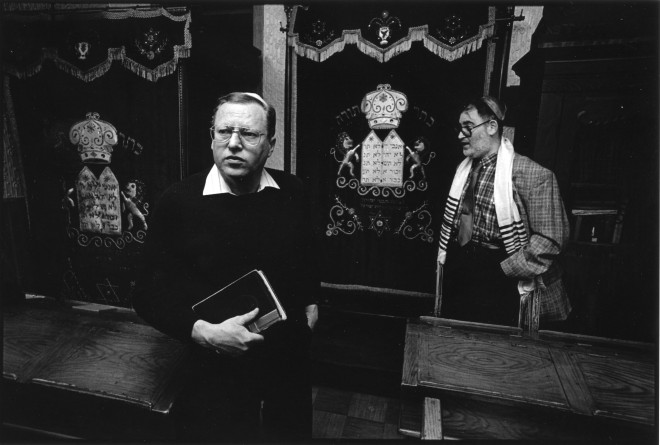 Ed. note: Harvey Finkle is an accomplished documentary photographer who has published four books, one of which is Still Home: The Jews of South Philadelphia, the companion to his 2000 exhibition at the National Museum of American Jewish History. He was generous enough to share these photos taken between 1999 and 2001 at Congregation Shivtei Yeshuron-Ezras Israel, one of the Hidden City Festival sites. Later today, the sweater that has been knitted during festival hours will be mounted on the exterior of the synagogue and will remain through the festival’s conclusion on Sunday.

In the late nineteenth and early twentieth centuries, South Philadelphia became the destination for tens of thousands of Eastern European Jews transplanting their unique culture into the new world. In the late 1990s, it was on the verge of disappearing, and I began to document—STILL HOME: The Jews of South Philadelphia—this once vibrant culture through the lives of the remaining 400 to 500 ancestors of the immigrant generations, for whom South Philly was still home.

There were three synagogues remaining out of what is claimed to have been as many as 125. Accurate or not, there were once many synagogues in South Philly. Shivtei Yershuron, an orthodox synagogue, struck me as unique. Located amongst row houses on South Fourth Street, the interior reminded me of what once might have existed in the old country; a bema in the middle, the walls and ceiling covered with tin of impressed squares, small oval photos of those who were board members gathered in a single frame, a memorial wall listing of those who had past.

The Shabbat congregation ranged from men in their 40s up to their 90s, and a few women. For me, it was like hanging on a corner, a major activity in city life. One member from the congregation usually conducted the service; several were quite knowledgeable and capable to lead. While one was conducting, other members would be having conversations about sports, politics or people gossip . A shush came from the bema and all became quiet, at least for another five minutes. Then the conversation would renew.

Alvin Heller is the reason the synagogue survived. Al cherished the synagogue; his relatives were members probably at the time it moved to its current location about a century ago. He provided the food for the Oneg Shabbat. On high holidays, he once witnessed the crowded congregations flood into the streets, a far cry from the recent years when we often could wait an extra hour before having a minyan.

Harvey Finkle Harvey Finkle is a documentary still photographer who has produced a substantial body of work concerned with social, political and cultural issues. His work has been extensively exhibited and published, including four books entitled, “Urban Nomads,” “Still Home: Jews of South Philadelphia”, “Reading”, and “Independent Living: The People Behind the Movement”. Visit his web site, harveyfinkle.com.