Putting the Bibo in Bibotorium 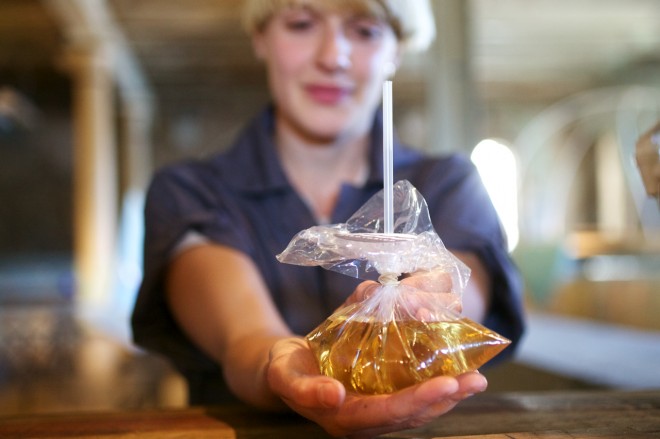 One of the most impressive things about the Camp Little Hope crew’s Bibotorium is the thought and creativity they put into even the tiniest parts of their project. Take, for example, the collective’s ingenious solution to what might have been a vexing problem: how to serve the iced tea “brewed” from one of three endangered water sources that they serve to visitors to the Hidden City Festival’s Kelly Natatorium site. They could have settled for dixie cups, but that would have created a lot of trash, which is exactly what you don’t want to do in a project that aims to raise awareness about the future of our water supply. Using a plastic bag, rubber band, straw and cute little paper collar that says “Bibotorium” is wonderfully simple and elegant–albeit considerably more labor intensive. Yet even the extra work involved creates a sense of theater. Click any of the thumbnails below to launch the slideshow and take a look at Camp Little Hope member Isabella Martin in action. Or stop by in person–this is the final weekend of the Festival and Camp Little Hope will be “launching” its boats on Saturday at 3 with an event called “Dreamboats for Nightmares.”