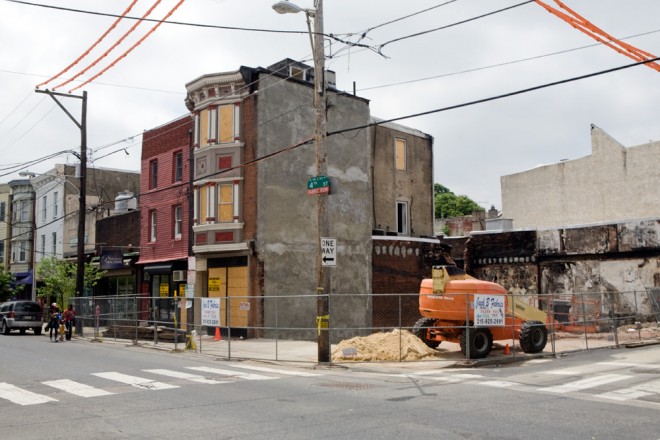 At 4th & Fitzwater, the hole in the ground is a painful, but temporary, reminder of the fire that cost a captain his life | Photo: Bradley Maule

On Saturday, April 6th, fire Captain Michael Goodwin lost his life fighting a fire that shook the lives of dozens more and rearranged an anchor corner of Fabric Row. An electrical fire that started in the basement of Jack B. Fabrics destroyed that store, displaced 17 residents above it, and put the future of several neighboring businesses in jeopardy. But through faith, perseverance, and a little bit of luck, they’re all reopening—eventually.

Jack B., at 748 South Fourth Street (on the southwest corner of Fitzwater) for 37 years, was completely ravaged. However, with a lease on the retail space across Fourth Street and a limited backup of inventory in storage there, they were able to reopen within weeks in a temporary space. Their building has been demolished and the ruins cleared, and construction will begin on its replacement this summer, with Jack B. hoping to open the new space in the old location by the end of the year.

Next door at 750 S. Fourth, Urban Princess suffered significant damage and lost a good deal of its merchandise, but the store will reopen this weekend a block and a half north, near South Street. At 752, the Platinum Real Estate office remains closed, but the firm is still representing clients out in the field.

And straddling all of the above is 754 S. Fourth. The L-shaped property extending from 754 and wrapping behind the other buildings out to a second storefront at Fitzwater Street was the longtime home of Kincus Fabrics. Its owner, Marty Zatcoff, closed Kincus in 2011 after thirty years there and next door at 756 S. Fourth. The latter location is now Bicycle Revolutions, which was largely unaffected by the fire, but at 754, the situation is much more complicated. 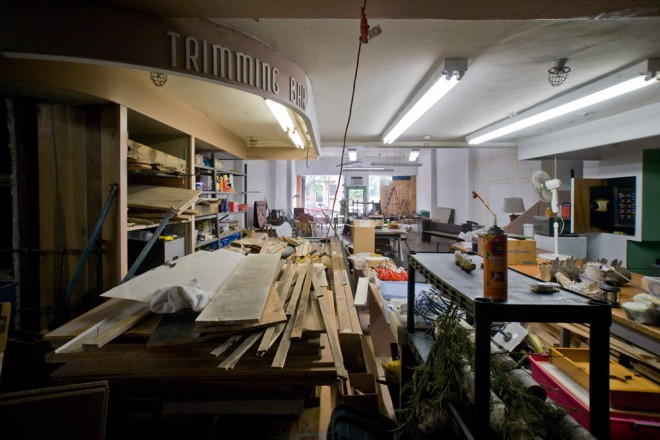 The volatile workspace of Moon & Arrow and Territory Hard Goods was largely spared by the fire | Photo: Bradley Maule

Chelsea Pearce opened Moon & Arrow, a handmade and vintage boutique, there in October 2012. The store doubles as the physical space for Territory Hard Goods, a mostly online concern co-owned by two married couples, Trevor and Laura Thieme, and Newt and Kristy Lynn. At once the space is two businesses, a workspace, a studio, and a gallery.

The Fitzwater Street side—“The Moon Room”—has been used for art shows. As though the heaviness of dealing with a fatal fire weren’t enough, one of those shows was a memorial service for Pearce’s father, the photographer Tony Gaye, who died unexpectedly in December. His framed photos and vintage equipment, including a couple Hasselblads, were still on display when the fire started during regular Saturday business hours.

“The smoke was green,” Pearce remembers, “and it was coming through cracks in the walls. Within minutes, you couldn’t see two feet in front of you.” Most of the equipment was spared, but some irreplaceable photos were lost; smoke blackened the tiling on the floors, discolored the walls, and mold has cropped up from the water used to fight the fire. And all of the salvageable merchandise must be cleaned, washed, or reupholstered.

It’s a long and arduous process that involves the shop’s insurance, the landlord’s insurance, L&I, ozone testing, and tending to a store full of smoke damaged merchandise. “Our insurance has been working with us to help temporarily rent a space across the street,” Pearce says. “But we still have to prepare that store, and clean our stuff and move it over there, and it’s difficult because it’s here [in the damaged space].”

Pearce, Lynn, and Thieme each recognize how much worse it could have been—tons of wood shelves, upholstery tools and chemicals occupy the back room, for example—and Captain Goodwin’s sacrifice is not lost on them. “It’s an instance in life where you feel so lucky, because we could have lost everything,” Pearce observes. “We can’t really cry about being a victim when so many people were devastated and someone lost his life.” 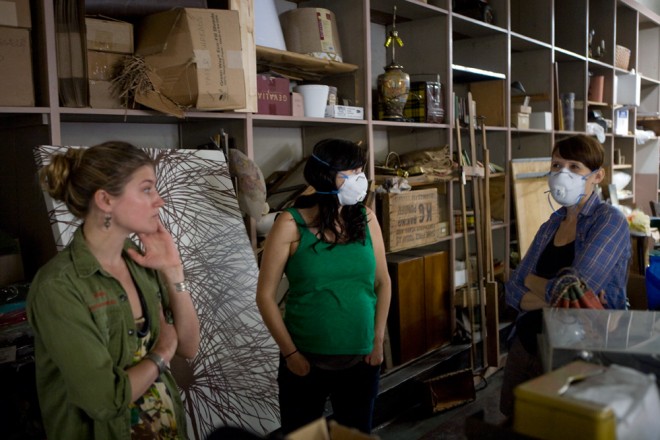 Nevertheless, making a recovery requires putting in long hours within a damaged, borderline hazardous space, combing through every last piece of merchandise and equipment to determine if it’s still usable. Lynn and Thieme, who are each pregnant, have taken to wearing surgical masks.

“We don’t really want to be in here [while we’re pregnant],” says Lynn, “but we have a sales commitment and no place else to do it . . . it’s where our stuff is.”

“Plus, regardless of our contents, everything needs to be cleaned,” Thieme adds. “The fixtures, the floors, the walls.” 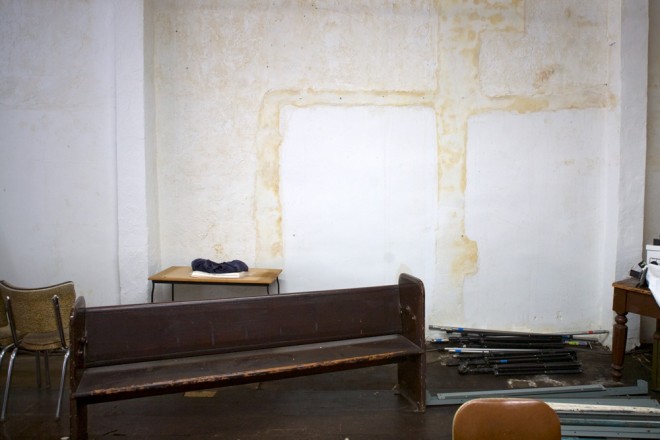 On the Fitzwater Street side of the shop, wall and floor damage are prominent | Photo: Bradley Maule

Much of, but not all of, it will be covered by the landlord Zatcoff’s insurance. “When we drew up the lease, my lawyer thought of everything to protect me,” Zatcoff says. That means that the roof, the walls, and floors are his responsibility, but the paint and the tiles on them are on the tenants.

“L&I have been really proactive and helpful in pointing me in the right direction,” Pearce notes of her obligations in getting the storefront back in order.

In the two months that have passed since the fire, both Moon & Arrow and Territory have supplemented their livelihood by doing as many markets as possible. Territory set up at the Brooklyn Flea at the Piazza this past weekend, and Moon & Arrow is doing both the Fishtown Festivale at Johnny Brenda’s on Saturday and the South Philly Fest at Lucky 13 on Sunday.

Zatcoff’s insurance will also cover the Moon & Arrow/Territory rent while they’re in the temporary location across the street, which is a huge relief for all of them. “There’s a lot of moving around, cleaning, and setting up, but our priority is getting our studio set up so we can work in a clean space, not in a smoky, sooty space,” Pearce says. “We just want to get going again.”

With the temporary lease signed at 749 South Fourth Street, they plan to get going again by the end of the month. While they’re there, repairs and remediation will take place at current location, with a plan of reopening there in September.