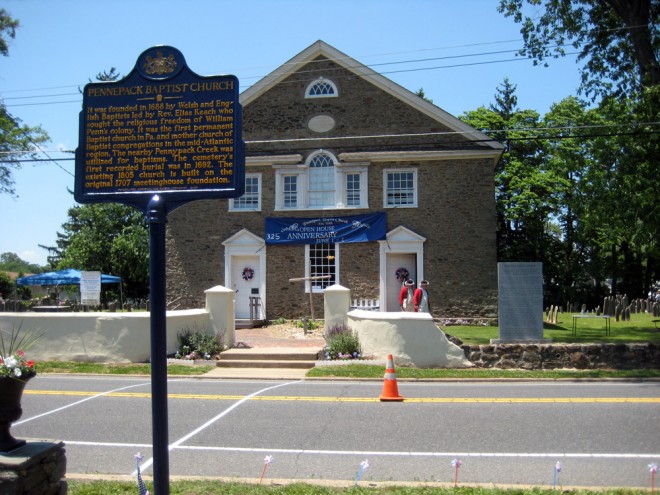 A small Northeast Philadelphia religious congregation celebrated a very big anniversary recently. Pennepack Baptist Church in Bustleton, the oldest Baptist church in Pennsylvania and seventh oldest in the United States—and mother church to many Baptist congregations in the mid-Atlantic region—marked its 325th anniversary with a two-day festival on June 1st and 2nd. A highlight of the festivities was the unveiling of a new Pennsylvania state marker honoring the church’s rich history.

Much of the history we celebrate in Philadelphia revolves around the pursuit of freedom—political freedom, freedom of expression, freedom from bondage and oppression. Long before the pursuit of these freedoms took center stage, however, Philadelphia was a haven for those seeking religious freedom. William Penn envisioned his Colony of Pennsylvania as a “Holy Experiment,” a place where people of all faiths could be free to worship in peace. In 1683 a group of five Welsh Baptists arrived in Philadelphia in search of that freedom and settled on Pennypack Creek near present day Bustleton. By 1688 their numbers had increased to twelve and, led by Reverend Elias Keach, they established their congregation, using Pennypack Creek for their baptismal services.

After meeting in members’ homes for some 19 years they constructed their first church building in 1707 on what is now Krewstown Road, on the edge of Pennypack Park. That same year Pennepack Baptist joined together with four other Baptist churches in the region to form the Philadelphia Baptist Association, the first Baptist association in the new world. The 1707 church building was enlarged in 1774 and then replaced by the present building in 1805. In 1885 the congregation built and occupied a new building about a mile away, but in 2006 they sold this building and moved back to the original 1805 church, where they remain today. 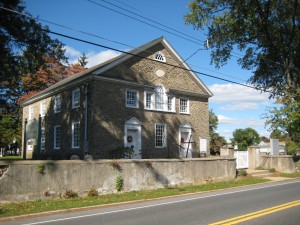 Pennepack Baptist, also known at times as Lower Dublin Baptist Church, grew from the original twelve charter members in 1688 to a congregation of over 300 by the early nineteenth century. Among its notable pastors and parishioners were Samuel Jones, pastor for 51 years (1762-1814), who was an early graduate of the University of Pennsylvania and who went on to help found Brown University in Rhode Island; Ebenezer Kinnersley, who became a professor at the University of Pennsylvania and worked with Benjamin Franklin on his experiments with electricity; and a number of Revolutionary War veterans who are buried in the church cemetery. The latter include Dr. Enoch Edwards, a leading patriot who was an attending physician to George Washington during the War and who helped draft Pennsylvania’s 1776 and 1790 constitutions, and several members of the Holme family, the prominent local family for whom the neighborhood of Holmesburg is named.

In recent years membership in Pennepack Baptist has declined and the congregation is now back to around a dozen active members, the same size as the original founding group. Pennepack Baptist does not presently have a pastor, but is led by a lay leader, Cheryl Carlson. She and the other members of the small but committed congregation work hard to preserve the religious tradition and physical history of the Church. In 2010 they established the Pennepack Baptist Historical Foundation, a separate non-profit whose mission is to preserve the Church and promote its history.

One of the activities at the 325th anniversary celebration was an excursion through the woods to “Baptismal Rock,” a large rock on Pennypack Creek about a quarter mile from the Church that, according to tradition, was the site of member baptisms from the earliest days of the Church. Standing on the rock along a peaceful stretch of the Pennypack that looks almost untouched from the time of those late seventeenth century baptisms, one hopes that Pennepack Baptist Church can survive and continue to be part of the religious and historical fabric of Philadelphia. 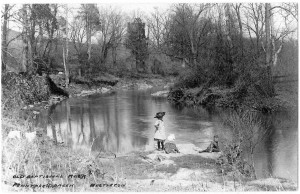 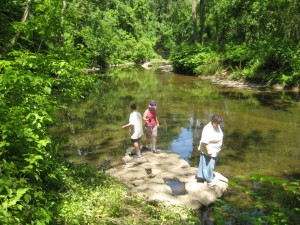