Our City Of Ruins 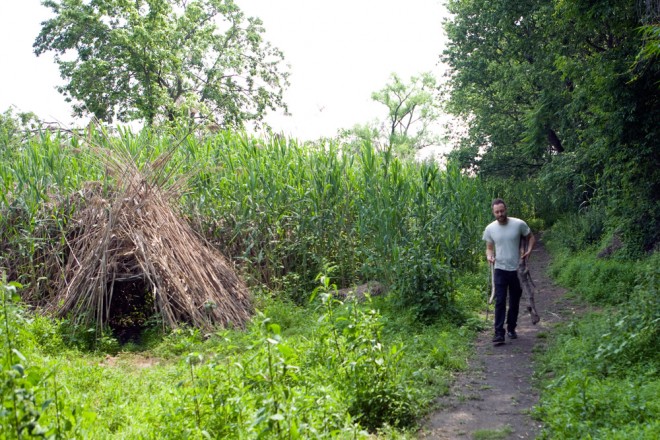 An artist’s work is never done. Ben Neiditz gathers wood from on site to add to the Ruins at High Battery installation he created with Zach Webber | Photo: Bradley Maule

Wedged between the Philadelphia International Airport, the Delaware River, and a host of industrial concerns stands the Revolutionary relic built to protect our fledgling country. Of course, Fort Mifflin was sacked by the British in their siege of Philadelphia in 1777, but hey, we won the war, took it back, and kept ourselves a country whose birthday we’ll celebrate next week.

Surrounded by a moat long since reclaimed by nature, Fort Mifflin is an unusual green space along the tidal Delaware River. It’s for that reason that artists Ben Neiditz and Zach Webber included the natural elements for their installation, Ruins at High Battery, which recalls ancient squatters settlements and improvised dwellings on the banks of the river.

It’s the last weekend of the Hidden City Festival 2013, after which Ruins will be removed. A shack in the woods, a marshy lookout surrounded by snapping turtles, a low tide survey of human detritus, a dark artillery battery full of surprises, a high-up perch for reading the serial numbers of incoming airplanes passing just above—all of this is at Fort Mifflin for only two more days.

To launch Peter Woodall’s gallery from Fort Mifflin, click any of the images below.

To launch Bradley Maule’s gallery from Fort Mifflin, click any of the images below.