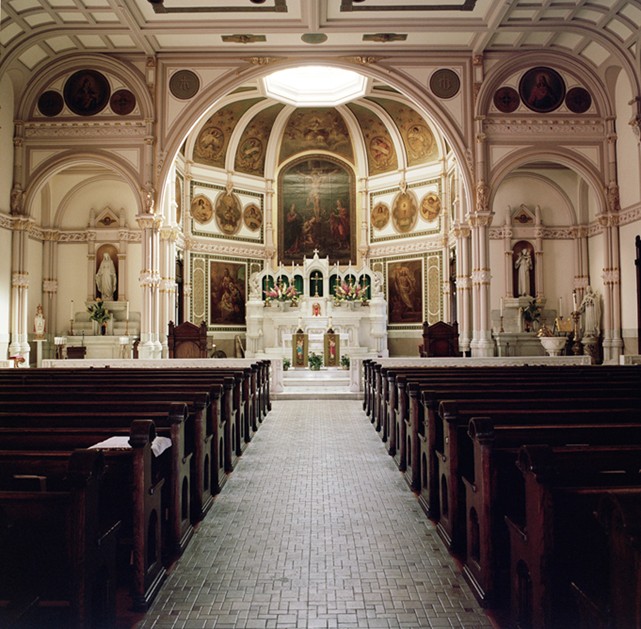 Along North Second Street in Kensington, St. Michael’s Catholic Church has commanded the skyline since it opened in 1847. That building, designed by celebrated ecclesiastical architect Edwin Forrest Durang, was a replacement for the previous church that stood there, burned along with the rectory and several surrounding properties on May 8, 1844. This evening in its sanctuary, author and Kensington historian Ken Milano tells the story of his latest book, The Philadelphia Nativist Riots (History Press, 2013).

In this sixth in Milano’s series of books on Kensington and Fishtown history, Nativist Riots draws the foundations of Irish Catholic immigration along the fringes of then-Philadelphia proper, in Southwark, Moyamensing, Schuylkill, and indeed, Kensington. Fearing the Catholics would challenge the King James Bible—enacted by Pennsylvania Legislature as an official textbook in public schools—the Protestant base of “Nativists” formed to combat the growing Catholic population. 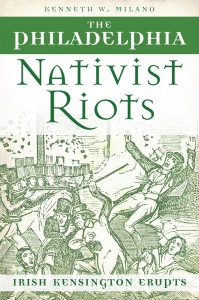 The Nativists, Milano explains, were founded in 1837 by “Van Buren Democrats.” That’s an especially noteworthy inclusion since, although Martin Van Buren was the first U.S. President to have been American born (each of the seven preceding presidents was born as a British subject), he grew up in a Dutch speaking family and remains still the only president who spoke English as a second language.

In Nativist Riots, we learn that the 1844 violent clash between the Nativists and Irish Catholics was not the first riot in Kensington, nor even close to it. In 1828, a melee on 3rd Street in the Northern Liberties foreshadowed events with a disturbance that resulted in a Protestant watchman dying in an Irish tavern. In 1840, residents on Front Street protested the building of a railroad—some 67 years before the Market Frankford Line would march up that very path—a contention that spelled several skirmishes between 1840 and 1842. Writing for Alexander’s Weekly Messenger, Edgar Allen Poe wrote of the 1840 “great rail-road war”:

The sober inhabitants of the District of Kensington have been all alive with a delightful little war of their own—a nice rough-and-tumble affair—none of your bloodhound business, or Bugaboo and Kickapoo campaigns.

And in 1843, a number of weavers went on strike to protest poor working conditions and low wages. In discovering that still other weavers were working below scale, they attacked the homes of those workers and destroyed property including looms and materials.

But it was in 1844 when Kensington’s riot history reached its apex. On May 3rd, the growing Nativist movement held a meeting in an empty lot in Irish heavy Kensington, a feat Milano describes as being “akin to the Ku Klux Klan having a rally in the middle of North Philadelphia today.” Obviously provoked by the bold move of the Nativists, the Catholics chased them off. With a weekend to rally, the Nativists gathered support around the city and region and reconvened in Kensington on May 6. Over the course of the ensuing three days, clashes resulted in the destruction of Irish Catholic homes, businesses, a fire company, and the St. Michael Parish. (On the same day as the burning of St. Michael Parish, St. Augustine Catholic Church, on Fourth Street near Vine, was also destroyed by Nativists. It too was rebuilt and reopened in 1847, with a design from Napoleon LeBrun, who designed the heart of Philadelphia’s Catholic community, the Cathedral Basilica of Saints Peter and Paul.) 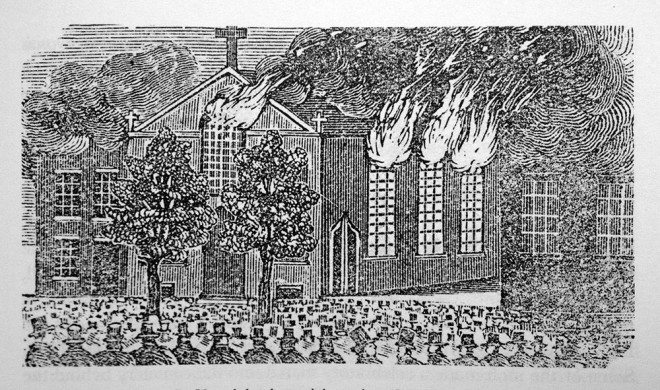 The burning of the original St. Michael’s Catholic Church | Engraving from A Full and Complete Account of the Late Awful Riots in Philadelphia, published in 1844 by nativist John B. Perry

Milano says the historical record shows that up to 24 were killed in the three days of rioting, but suggests the historical record’s casualty count is incorrect, as newspapers of the day largely did not report on the Irish Catholic wounded. He also rightfully mentions that the Nativist-Catholic conflict did not end there, but continued in July 1844 in Southwark, and as a result of the two riots, Nativist Party membership grew into the tens of thousands. Its successor, the Know Nothing Party, rose to the Presidential ballot, its most prominent member former President Millard Fillmore (then a Whig) losing in 1856 to Pennsylvania’s only President, James Buchanan. The party largely declined in the 1850s, split over slavery, but its nativist spirit was later recalled by the Ku Klux Klan.

The Irish Catholics of Kensington, meanwhile, regrouped and rebuilt in spite of the nativist resistance. The new St. Michael Parish was dedicated on February 7, 1847. (St. Peter the Apostle, the German Catholic church a handful of blocks away at present day Fifth & Girard, was consecrated one week later. It had just begun construction at the time of the 1844 riots.)

This evening, Msgr. John Miller hosts Milano and guests for a book signing and tour of the church and the cemetery, which was unharmed during the 1844 rioting. Doors open at 5:30 and the program begins at 6. St. Michael’s Church is at 1445 North Second Street in Kensington.