Looking Beyond The Festival At Hawthorne Hall 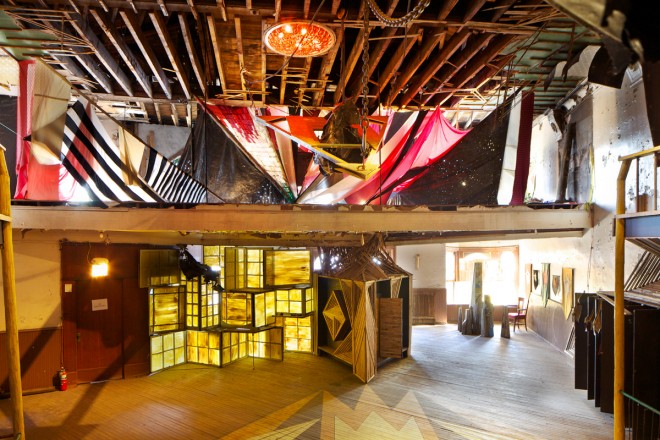 For visitors of this year’s Hidden City Festival, Hawthorne Hall is undeniably one of the most outstanding sites. Thanks to the pairing of a curious building with a curious group of artists, the building at 3849 Lancaster Avenue has transformed from a long-abandoned performance hall into a visually and sensually engaging experience. In exposing the beauty and potential lying dormant behind the brick façade, Rabid Hands Arts Collective’s installation provides a creative step in the right direction for a building and community poised for change.

The People’s Emergency Center (PEC), located a block away at 325 North 39th Street, has been hard at work planning the revitalization project that will encompass Lancaster Avenue from 37th Street to 47th Street, and the larger neighborhood from Mantua Avenue to Market Street. Their work, made possible by the Wells Fargo Regional Foundation, uses an extensive analysis of the area to suggest improvements to the quality of life, done through various community engagements like the Make Your Mark series. As it happens, Hawthorne Hall is targeted as a community asset and many believe its reuse may be the key to regenerating life along the historic corridor connecting city and suburb.

Along with PEC, several other Philadelphia organizations have taken an interest in the revival of this historically active portion of Lancaster Avenue. Two weeks ago, Drexel University’s undergraduate architecture students had their final studio review, in which six groups presented a year’s worth of master planning ideas for the same portion of the avenue. The work was reviewed by panel members including Bob Francis of Drexel University’s facility planning department, James Wright of PEC, and Bill McDowell of the Barnes Foundation. The panelists offered insights about Lancaster Avenue’s significance as a thoroughfare, and asserted that commercial corridors which have experienced this type of decline in the past have been able to make a comeback. They also reviewed the master planning ideas presented and discussed strategies for bringing about this type of revival.

In every proposal presented during the Drexel reviews, Hawthorne Hall was recognized as a goal for preservation and reuse. Over the course of the Festival, the site has seen a great deal of foot traffic from locals in shock that the building is active again, if only temporary, after being shuttered so long. They often make comments about walking past its unique façade for decades, never knowing what was inside. But the more pressing question on the minds of many is: what happens to the building after the festival and the Society of Pythagoras is no more? Will it go back to its state of disuse or is this the beginning of something new? 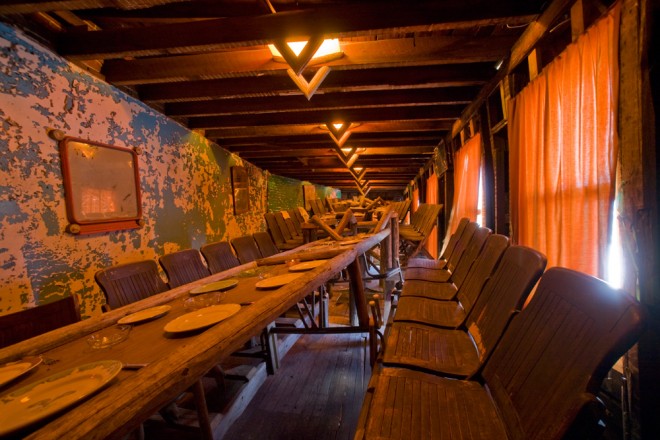 Fortunately, PEC has recognized Hawthorne Hall as a central figure in the revitalization of Lancaster Avenue and has already taken important steps towards its rehabilitation. In the past couple of years, PEC has purchased the two curving portions of the long row, one of them Hawthorne Hall itself. Last month, PEC received a $750,000 grant from Wells Fargo to continue planning, specifically including Hawthorne Hall. Currently, the idea is to preserve the existing stage and hall on the second floor of the building for a unique performance space, with a restaurant on the first floor. (This is not unlike Johnny Brenda’s model in Fishtown.) A second idea utilizes the second level for artist installation space, showcasing local talent and fostering a creative identity for the neighborhood. Whichever the direction, PEC is working hard to ensure that Hawthorne Hall will be in the hands of someone working toward reviving Lancaster Avenue and drawing people to the neighborhood from other parts of the city and region.

As somewhere already earmarked for rebirth, it’s hard to tell the Hidden City Festival’s impact on Hawthorne Hall. Kira Strong, Vice President of Community and Economic Development at PEC, remarks of the Festival, “it has been a great marketing tool to attract potential tenants.” Although no one has approached PEC yet about renting out the space, Strong is certain that the building has been activated in just the right way, bringing the kind of creativity and life that she hopes to see upon its rehabilitation.

But the most significant impact of the Festival may ultimately be that of resident morale. Many neighborhoods go through planning processes and hope for change, but few come through the way PEC plans to. “The key to gaining the trust of community members,” Strong says, “is to make certain things happen quickly, while planning for the bigger pieces of the project.” By setting achievable, short term goals that have an immediate impact, residents can recognize that the planning is not just for show. For example, streetscape improvements including sixteen street trees and eight mosaic tree pits have already been installed Hawthorne Hall’s vicinity. Funding for façade improvements on Lancaster Avenue has also been secured.

Seeing Hawthorne Hall as a mystical funhouse for five weeks—with another weekend to go—provides a big ray of hope for who believe in the future of Lancaster Avenue.

To view Peter Woodall’s gallery of the Society of Pythagoras installation by Rabid Hands Arts Collective, click any of the photos below.

To view Brad Maule’s gallery of the Society of Pythagoras installation by Rabid Hands Arts Collective, click any of the photos below. 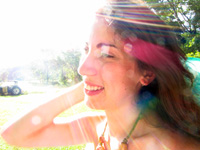 Sandra Kalanyan Sandra Kalanyan is a Hidden City Intern who has reveled in volunteering and observing at each of the nine Festival sites. She attends Carnegie Mellon University in Pittsburgh, where she has gotten to know and love the flourishing rust-belt city by studying in the Urban Design Build Studio. Upon her graduation with a Bachelors in Architecture in 2014, she plans to return to Philadelphia and pursue opportunities to work on community-oriented projects. Until then, she aims to catch up on lost time with the city that she neglected while growing up in its suburbs...