In The Mind’s Eye, At Least, Engine 46 Looms Large 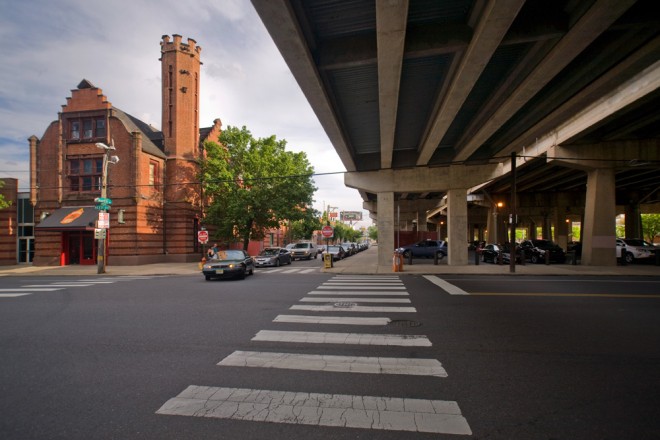 Engine 46 / I-95 juxtaposition, noticeable to passersby on the interstate and those exiting at Washington Avenue | Photo: Bradley Maule

When a few weeks ago the Hidden City Daily’s editors assigned me to look into the rumored demolition of a firehouse in South Philadelphia, I couldn’t picture the building they described. Only one firehouse stood out in my mental map of this city: the Flemish-style Engine 46 building, whose tower punctuates the skyline for commuters on I-95, just south of Washington Avenue. In my memory, it was a finely wrought structure of unquestionable historic import, and I dismissed the possibility that this was the firehouse in question. Unfortunately, I was wrong. 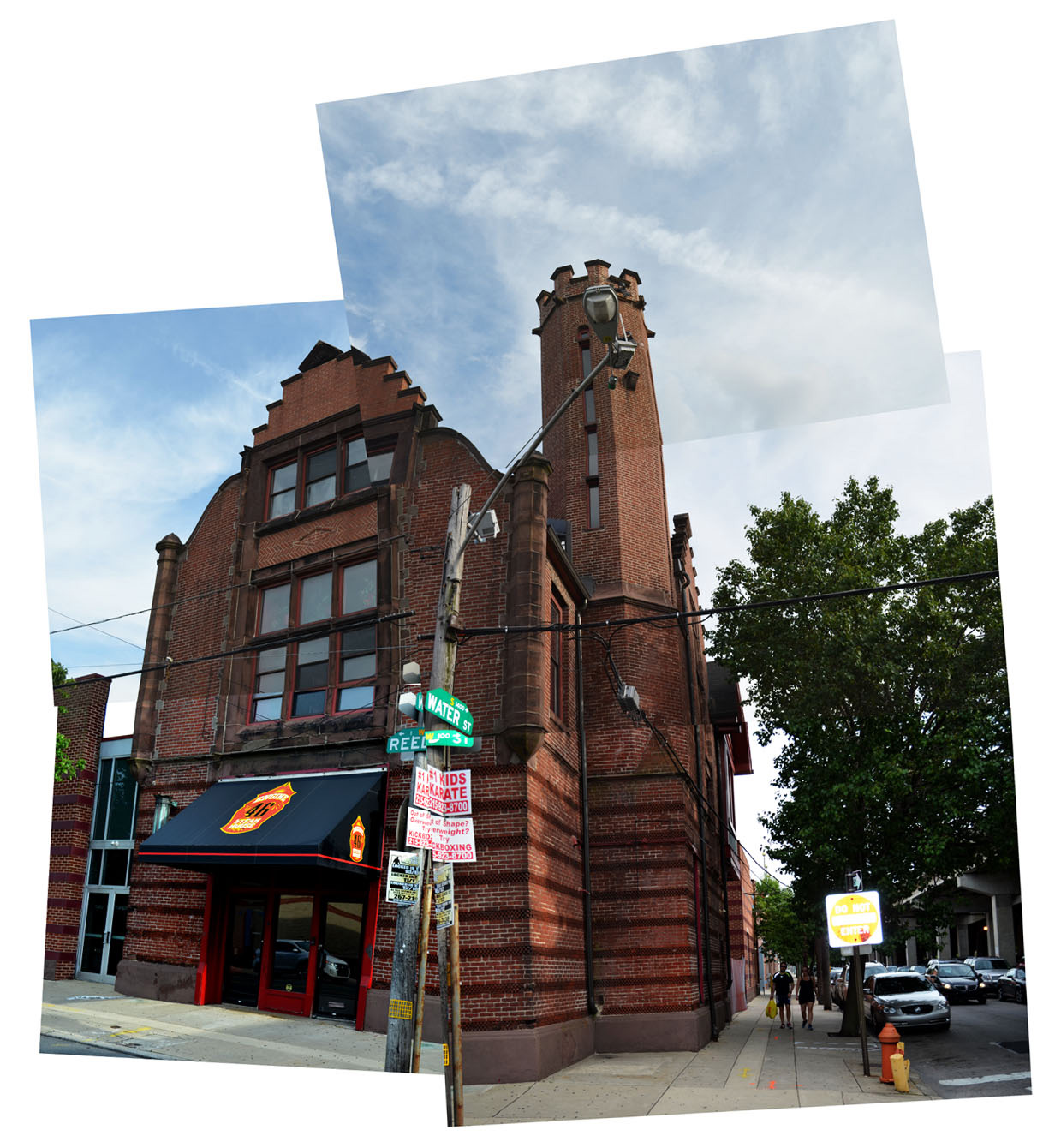 Engine 46 operated from the late 19th nineteenth century through its decommissioning in the 1960s. L&I records from 1999 show building permits signed by then-owner Bart Blatstein, who converted it into a short-lived steakhouse, and it’s sat vacant since 2006. Cedar Realty Trust, a real estate firm located in Port Washington, NY, owner of Riverview shopping center and cinema adjacent, now owns the firehouse. In January of this year, Cedar pulled a zoning permit “for the Partial Demolition of Existing Building ‘A2’ As Per Plans.” And on February 1, the firm was issued a demolition permit for “Demolition of Existing Building as Part of a Secondary Building.”

The language of these permits tempts optimistic interpretation. Engine 46 is abutted on two sides by a vacant commercial building; I hoped that inconsistencies in surveyed property lines had necessitated Cedar pull permits for 1401 South Water Street, the street address of the firehouse, even though (I hoped) they only planned to demolish the adjacent structure. After a week of attempts to contact Cedar, I succeeded in getting vice president Brenda Walker on the phone. She entertained no questions, and said, with only a thin veil of civility, that if I put my inquiry in writing, she “would consider” responding. Emails and further phone calls have gone unanswered.

Last week, I descended into the Municipal Services Building concourse, took a ticket at the newly redesigned L&I counter, and in surprisingly short order, was ushered back to the desk of a plans examiner. Seeing the site plan referenced in the demolition permit (“Building ‘A2’, As Per Plans”), my heart sunk: a thick marker outlined the entirety of Engine 46, along with the adjacent building, and scrawled in the middle the word “Demo.” 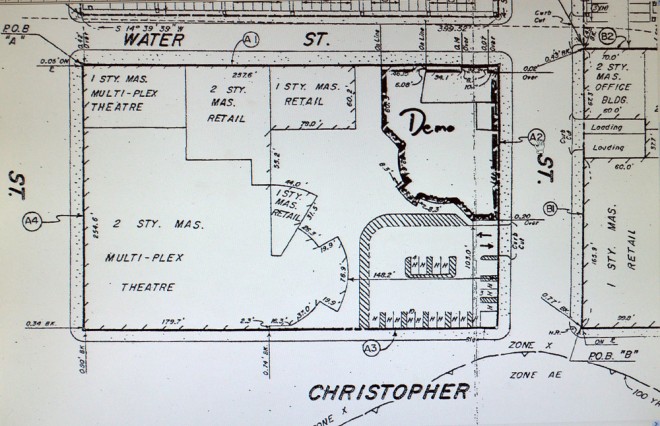 A not uncommon oversight, Engine 46 has not been listed on the Philadelphia Register of Historic Places, which would protect it from demolition. (An incomplete and insufficient nomination to the Historical Commission was submitted this year.) Traditionally, the Historical Commission has an aversion to intervening once demolition permits are pulled. 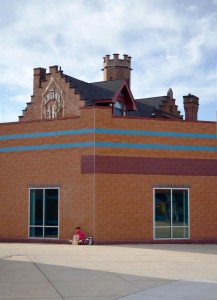 The building’s roofline is more pronounced when viewed against the more recent addition | Photo: Jacob Hellman

I brought photos of the demo plans to Pennsport Civic Association’s monthly meeting this past Tuesday. The news elicited several wide-eyed responses. “How could they do that–where is Inga Saffron?” replied one woman (Incidentally, Saffron published a story on the subject in in the Inquirer yesterday). But James Moylan, of the PCA board, was not so surprised. They’d witnessed much public distress prior to the recent demolition of St. John the Evangelist. “We started getting calls–we need to do something, one guy kept saying. So I said, ‘OK, here’s the deal: you are now officially in charge of the historic building committee’.” Moylan paused, and shrugged. “I left him three messages, and heard nothing.”

Unfortunately, this situation fits all too well with Aaron Wunsch’s diagnosis, made this winter in the context of a rare grassroots preservation of the crumbling Frank Furness 19th Street Baptist Church. “We’re used to seeing things come down,” he said, “and say it couldn’t have been otherwise. Some of the problems begin with the Historical Commission, but Philadelphians as a whole have adapted a posture of resignation.”

I myself have become immune to the demolition of churches. But the threat of losing Engine 46 pains me because within the city’s landscape it is a much rarer type. I wrote to my old architecture historian professor, Andy Shanken, who took a look at the building. “It’s a Dutch gable,” he wrote back, “vigorous, lively, spirited. It has verve. It has some of the streaky bacon of the high Victorian moment…also a nice example in its palate and materials of the Philadelphia Queen Anne [style].” 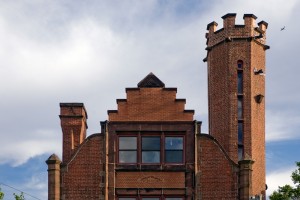 When I finally visited Engine 46, I didn’t find it as suggestive and delicate as it was in memory. The tower and chimneys make for a picturesque roofline particularly when seen at high speed from the highway, but up close, the building is actually quite plain. I conveyed this to Hidden City co-editor Nathaniel Popkin, who replied, “Funny, I had the exact same reaction the other day–it had grown in memory into some kind of Haarlem castle. But still, it ought not be demolished.”

Whether this particular building is lost or not, we must consider seriously the broader issue: the ease at which a private real estate firm can knock down and truck away our architectural inheritance–and for what? A one story retail store built of cinder block and Dryvit? That Nathaniel and I had similar anticlimactic reactions to seeing Engine 46 testifies to the power of such buildings: they grow and refine themselves in our minds. Meanwhile, we’ve lost the cultural machinery to rebuild them.