For The Fringe, A Building That Will Itself Perform 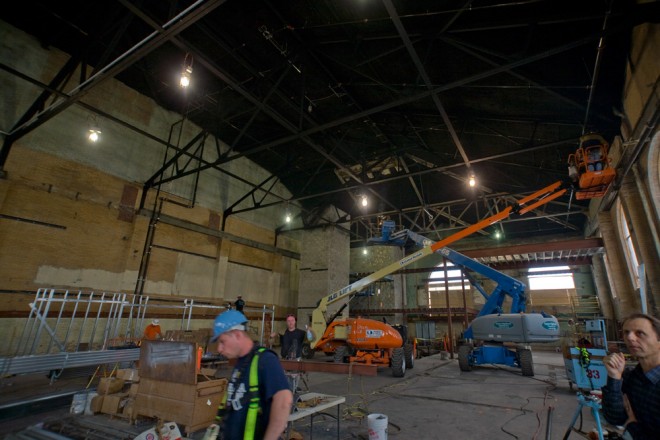 Under a looming Ben Franklin Bridge, the $7 million transformation of the dark brick 1903 High Pressure Fire Service building into the new home of FringeArts (formerly Live Arts Festival and Philly Fringe) is scheduled to be completed September 23—two days after this year’s festival is over. Perhaps there is irony in a theater being late for its first curtain call, but the delay isn’t a disappointment to FringeArts director Nick Stuccio, nor should it be. The reuse and reconstruction, so carefully designed by Antonio Fiol-Silva of the architecture and planning firm WRT, has the rather magical capacity of performing as theater, bar-restaurant, public gathering place, office, and rehearsal studio–possibly all of these things at once.

“The design team,” says Fiol-Silva, “spent a lot of time thinking through all the ways in which the building could be used to further FringeArts’ programs. The more we did that the simpler, more open, and more flexible the design became–which pleased us all to no end.”

When FringeArts acquired the building on the corner of Delaware Avenue & Race Street last year, it was filled with massive 1950s era pumps, tanks, and electrical equipment. Sales and salvaging of the pumps helped defer construction costs; some of the visually suggestive electrical gauges and other vintage equipment and signs were put in storage and will be reinstalled. Demolition left the design team with an empty 15,000 square foot rectangle–a linear space with generous 25 foot archway window openings along the long north wall facing the bridge’s stone anchor and east out to the river and Race Street Pier, directly across Delaware Avenue. 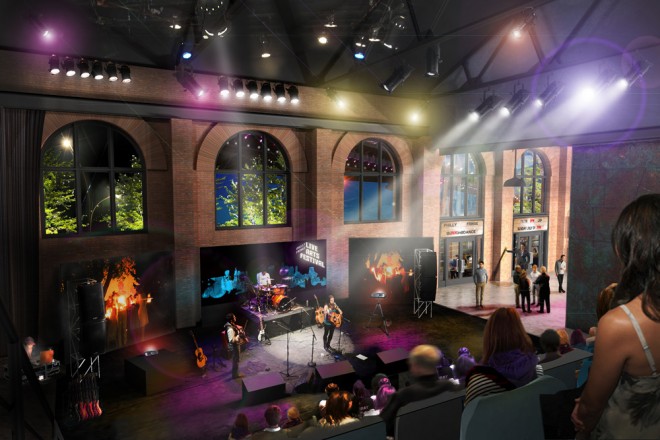 Fiol-Silva says the one large space–which he calls a “telescoping” room–can be expanded or contracted with two interior rolling walls around the central theater space. Thus, the theater can be opened to bar/restaurant and to the rehearsal space, as desired. “Opening and closing the walls in itself were conceived as part of the performance art of the place, revealing rooms or making them recede as the activities unfold,” he says.

The High Pressure Fire Service building was the first of its kind in the world–a typical Philadelphia engineering innovation of the period, according to Harry Kyriakodis, who wrote about the significance of the building in these pages in 2011 (actually one of our very first articles). The high pressure system was able to deliver 10,000 gallons of water a minute at 300 pounds of pressure and could shoot a two-inch stream 230 feet in the air, critical for putting out fires. “The system’s success,” wrote Kyriakodis, “brought about similar high-pressure water systems in other American cities. Philadelphia’s was acknowledged as the best in the world for years and years.” 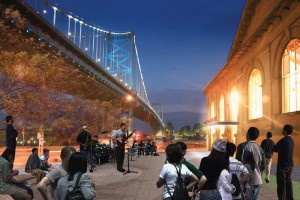 Stuccio says FringeArts was inspired by the history of the building. “We like to think of ourselves as forward looking and that we embody that idea by doing our mission in this building. The building saved lives–it was the promise of technology delivered–and we like to think that we have a great effect on people’s lives.”

That impact is likely to be amplified in the way the building engages with its site at the edge of Old City and the waterfront itself, and in the wide asphalt space surrounding the building facing the bridge anchor that they envision as a two-tiered plaza. “As an institution it seemed to us that FringeArts is all about blurring boundaries–extending perspectives,” says Fiol-Silva. “Physically, for the plaza and the building, this means making a connection to the outside, the plaza and beyond–to see the mind’s eye travel up the bridge piers, across the span, over the expansive water sheet of the river. No mistaking where you are–the spirit of place is always present.” 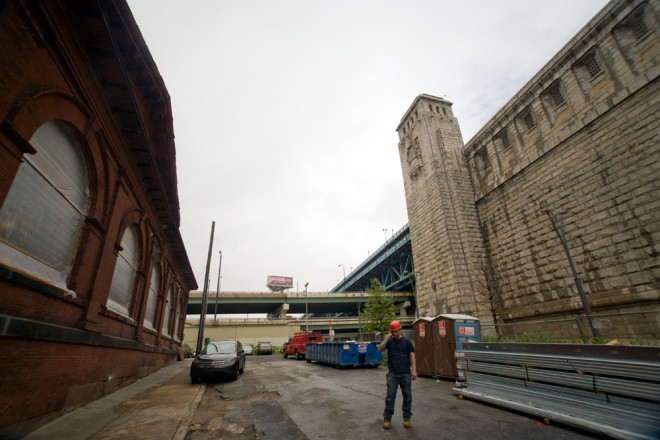 The architect sees the bridge’s imposing stone anchor as a kind of monumental “cliff” that lends the plaza form and visual interest. Stuccio sees it being used for image and video projection. The two-tiered plaza is meant, much like the interior space, to adjust for planned theater, spontaneous performances, a café, and a gathering space. Stuccio says he’s followed the recent evolution of the public spaces at New York’s Lincoln Center from modernist desert to destination hang-out rich with visual interest and diversity of uses and users. “People love to be outside hanging out together,” he says.

Certainly, the majority of them will be drawn to the 240 seat expandable theater, tricked out with 50 percent LED lighting, which allows stage and lighting designers extraordinary range of effect. Stuccio says lighting is the foremost theater innovation today, but LED is still expensive. As the price comes down, FringeArts will adjust. 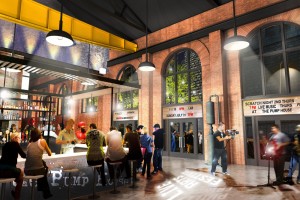 When the space opens in late September, the bar-restaurant will still be in planning. Stuccio says he’s been in talks with various operators, but hasn’t settled on anyone. “We really want to get that right,” he says. “That’s proving to be the biggest challenge by far–it’s not something we know.” Among the many factors involved in planning a restaurant, the operation will have to integrate well with the building, its material history, and the site along the waterfront–opposite I-95. Ultimately, it’s the whole package that matters for the ongoing recalibration of both Old City and the central waterfront.

“This is the next wave of development down here,” says Stuccio. “And what a crazy place this is–there are strip malls and strip clubs and casinos, the interstate, the anchorage, the pier, the bridge. It’s perfect for us to be here.”

“The city is a stage,” says Fiol-Silva. “This project and FringeArts are a great metaphor for that.”