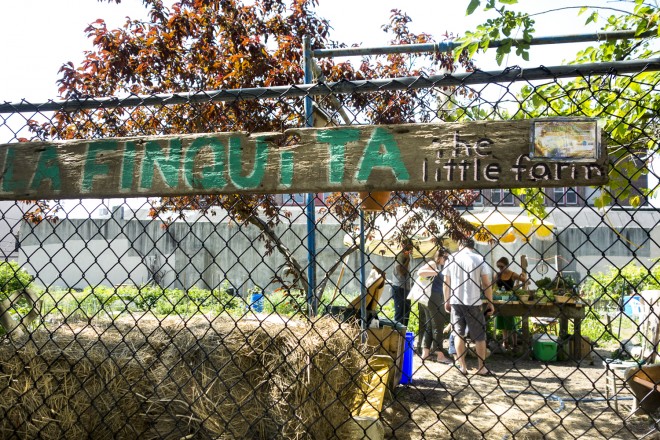 Editor’s Note: In the shadows of an abandoned umbrella factory in South Kensington, neighbors have given new life to an urban oasis at Master & Lawrence Streets for the past twenty-five years. Hidden City Contributor Theresa Stigale visited the garden on a recent sunny Sunday morning and was surprised to find the wide array of fresh produce offered for sale, some as you will see below, harvested just minutes before purchase. She has a photo essay at the bottom of this post.

Neighborhood activists in this historically diverse neighborhood, just north of Girard Avenue, named their community garden La Finquita—the little farm–25 years ago. La Finquita occupies land that was formerly used by the Pyramid Tire & Rubber Company. After the industrial building burned down, the neighborhood was faced with yet another abandoned lot and a group from the Catholic Worker Movement, around the corner at Lawrence and Jefferson, whose mission was to encourage self-sufficiency through farming, started planting.

Later on, when that group was no longer involved, the mostly Latino neighbors banded together to keep the farm growing. In more recent times as the original neighbors aged or moved out and farm activity dwindled, some feared that the increasing land values would mark the end. But in the past year-and-a-half, new Finquita members stepped up to the task and enthusiastically devoted their time to create an impressive revitalization of the garden. The farm now has its very own Farmer’s Market, the first in South Kensington, which runs each summer Sunday from 10AM to 2PM. 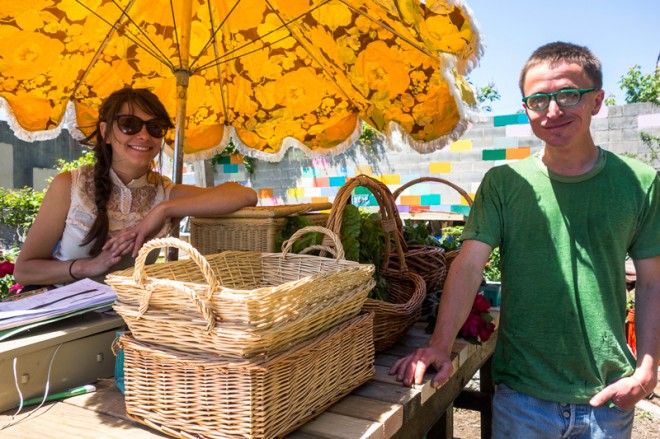 Natania Schaumburg is the director of programs at South Kensington Community Partners and helps to run the farm and the Farmer’s Market. “We feel very committed to this neighborhood because of the long history and the tight group of neighbors in the immediate area who helped to keep the garden going all of these years,” she said. “We love to hear their stories and how important this garden is to them. I am very personally invested because it is such a special place. The quality and diversity of the organic produce in a community garden is unusual. We want to take it even further and start a recipe sharing initiative.”

The farm is supported with the help of a grant from the grant from the company Nature’s Path Foods and Organic Gardening Magazine to extend their network into the South Kensington area. The funding has helped provide a much desired water line. Previously, gardeners had to laboriously hand water the fields using a near-by fire hydrant. The grant also enabled area children to attend the new “Finquita Farmers in Training” program. At present, 10 young people are learning how to grow organic produce in those hands-on classes and when they graduate, they will be tasked with teaching adults in the community.

One of the current students, Dajeer, is the great-grandson of an original and still active 83 year old Finquita member, Danny Rodriquez. Stop by the farm on a summer Sunday and you might be lucky enough to hear a neighborhood rooster crowing nearby. The bonds with the neighbors run deep: Schaumburg knows that the rooster, named Peewee, belongs to Mr. Rodriguez, whose former rooster was named Poncho.

She credits the hard-working staff and neighbors for the success of the farm. “Cliff Brown manages the farm and does an exceptional job with his past farming experience,” she observes. “Cliff is from Maine and worked on farms and CSA programs there. He really enables the land to be very productive. Zach Prazak is the personality behind the stand. He is from Texas and has a vast knowledge of the produce, and can even provide on the spot recipes for customers.”

Another neighbor, Jeff Monjack, was involved with the garden back in the days of the Catholic Workers. “Jeff’s initial involvement and ongoing support really gives us a long-term perspective on how important this special place is for the community,” Schaumburg says. 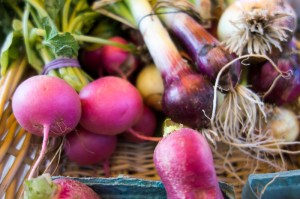 And what might you find ready for sale? Well, there’s the lyrical parsley, sage, rosemary & thyme. But these herbs are just a hint of the beautiful organic produce on sale each week. Other offerings might include mustard greens, broccoli, spinach, collards, and surprisingly even more exotic vegetables such as french radishes, nettles, red veined sorrel, and tatsoi (or spinach mustard, an Asian salad green).

All produce is the very essence of fresh, some picked right before your eyes if it is ready for harvest. When I inquired about rainbow chard, Natania looked over and answered, “sure, in about three minutes.” That’s about the time the produce was cut, washed and wrapped, a feat that Whole Foods could never dream of achieving and just one of many reasons to support the farm and its altruistic endeavors. Some of each week’s harvest is donated to the Drueding Center’s Food Pantry, located right across the street.

Soon, La Finquita will accept SNAP/Access cards right on site. Plans to partner with bodegas, neighborhood corner stores, and small restaurants to stock their produce will certainly extend their reach to provide fresh produce to those who cannot make it to the site. In addition, they have a schedule of workshops on container gardening and pest management, with the first workshop on composting set for this Friday night, June 7th, at 7PM (rain date June 13), in conjunction with the Penn State Extension Program. This one is free with an RSVP to [email protected]mmunity.org.

To launch Theresa’s photo essay, click any of the images below.