A Preservation At A. Pomerantz 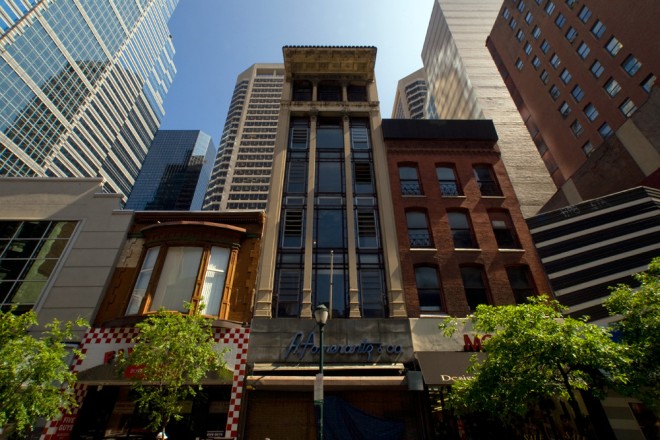 As with the former Horn & Hardart at 15 South 11th Street, the small­‐scale skyscraper at 1525 Chestnut Street that once housed A. Pomerantz & Co. (1917) is among 15 properties that the Philadelphia Historical Commission will consider to add to the city’s Register of Historic Places this Friday. With Allee Berger, I co‐authored a nomination for the building, which was submitted by the Preservation Alliance for Greater Philadelphia—though the nomination that will actually be voted on this Friday comes from Jon Farnham, the Commission’s Executive Director. 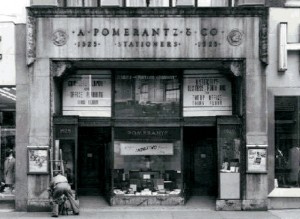 Owned by former Phillies center fielder Garry Maddox (though by extension it is technically property of TGDGME Chestnut LLC), the building currently sits vacant, begging for some form of reuse.

Known for a variety of local and regional buildings, Philadelphia’s Edward P. Simon and David B. Bassett designed the building. Together from 1908 to 1919, the Simon & Bassett firm was responsible for projects such as the Neo­‐classical Alfred E. Burk mansion at 1500 N. Broad (1909), the Garden Pier in Atlantic City, NJ (1912), a local police and fire station at 22nd Street & Hunting Park Avenue (1914), and in collaboration with Simon’s younger brother and architect Edwin Brumbaugh, they designed an extensive residential development for the Chester Shipbuilding Co. in Chester, PA during the war years. Along with 227 houses, the development included a hotel, a boarding home suitable for 25, and 23 apartments.

Amen Pomerantz—an early 1880s immigrant who capitalized on the westward shift of commerce resulting from the construction of City Hall—commissioned the firm in 1916 to design a new building for him to relocate his stationery and office outfitting company. Purchasing a lot in the heart of the city, Pomerantz had a preexisting three­‐story structure demolished to allow the building to fit his exact needs. As indicated in an October 1916 edition of The American Contractor, Simon & Bassett originally envisioned steel frame construction (which was responsible for the boom of early skyscrapers in the latter half of the 19th century, particularly in Chicago), but only a month later they instead decided on a reinforced concrete skeleton; by then a popular but not as developed means of construction. It is thought that this abrupt change could have resulted directly from a contemporary edition of the trade journal Concrete that employed architects and contractors to use reinforced concrete over steel so that the latter material might be saved for the war effort. (The United States did not declare war on Germany until April 1917, but manufacturers had been supplying allies with steel and other materials/munitions since the very beginning of the conflict.)

Though this sudden shift in framing and the somewhat early use of reinforced concrete is of note, the true significance of the A. Pomerantz & Co. building lies in its outer appearance, specifically that of the south‐facing façade. A traditional skyscraper was unnecessary for the building’s program and would have proved impractical anyway given the dimensions of the lot, but in the slender six-­story structure, Simon & Bassett employed the base, shaft, and capital columnar order promoted by famed architect Louis Sullivan as well as a curtain wall. 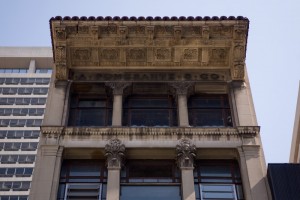 Playing with architectural traditions both old and new throughout the façade, the architects designed the building’s base—expected to be weighty and supportive—as a glass void surrounded by a limestone frame. The next four floors appear as a long span of blue glass broken only by subtle metal window frames and two dramatic, decorative pilasters stretching from the top of the base to the bottom of the capital. Coupled with the glass, these pilasters reinforce the striking verticality of the structure while establishing another contrast between elements of classical architecture with the increasingly preferred exterior of modern highrises. The peak of these pilasters and large panes of glass serve as the bottom of the sixth floor, but are completely overshadowed by the structure’s audacious cantilevered cornice. Stretching far out over the sidewalk, the coffered cornice features accurate classical ornament and designs of white terra cotta, topped by red barrel roofing tiles. While this is ostensibly a traditional feature, the projection of the cornice counters convention and is only made possible through technologies unavailable in antiquity. The flagship Pomerantz building, it exhibits both technological innovations throughout as well as the radical stylistic novelties and games these developments allow. 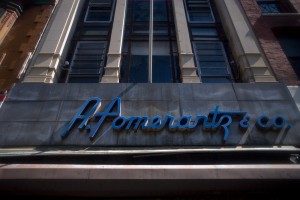 Bassett left the firm after the completion of 1525 Chestnut. The younger Simon became a full partner following Bassett’s departure and the resulting Simon & Simon firm went on to complete a number of significant local commissions. Among these were Municipal (later JFK) Stadium on S. Broad (1925), the Rodeph Shalom Synagogue at 615 N. Broad (1926), and the Strawbridge & Clothier Department Store at 801 Market Street (1928).

The 1525 Chestnut flagship stayed A. Pomerantz & Co.’s main building through most of the 1900s, but the company was sold to investors in 1988 and went through a variety of consolidations, mergers, and name changes before the building was purchased by Maddox in December 1994. The company still exists, offering “furniture and solutions for multiple industries,” with Maddox as owner and CEO. The company maintains an office in 123 South Broad Street, but its longtime flagship on Chestnut Street remains shuttered. 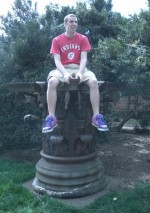