A Place For Enlightenment In Southwest Philadelphia 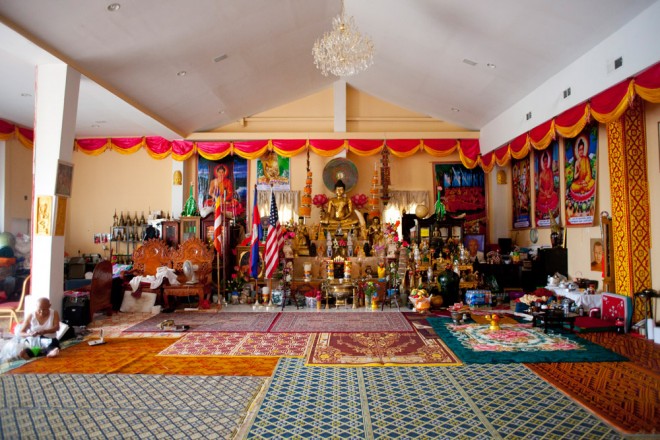 Inside the shrine on 58th Street in Southwest Philly | Photo: Dan Papa

As green space goes in Southwest Philadelphia, Bartram’s Garden is decidedly its crown jewel. But just two blocks south on 58th Street, a different kind of oasis sits amidst the industrial ruins of this riverside neighborhood: the Khmer Palelai Buddhist Monastery.

Upon entering, I was greeted by monks in blazing orange robes, and a family sitting outside in a wood shack among wandering dogs and playing children. A pair of the monks played chess as a child fed one of the dogs some meat scraps, while a fire burned nearby in a barrel. The scene convincingly transported me to a peaceful village in Southeast Asia.

The monks’ residence is near the entrance at 2701 South 58th Street, opposite of which are two covered stages for large gatherings that take place here. The property is about a quarter mile square, with a large stretch of concrete on one side, a raised grassy area on the other. 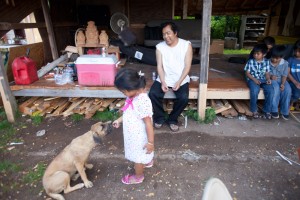 At the far end of the property, I met Sam Sokhoeun, the soft spoken head monk living here. Behind him was a woman tending to a hill of planted crops. Sokhoeun came to Philadelphia from Cambodia in 1986 and lived in Pennsport, at the associated Khmer Temple on 240 Greenwich Street. Since moving out to 58th Street in 2004, he has continued building to accommodate the immigrant community. A large new temple is set for construction on the grassy side, which I expected to be underway.

“Not yet,” he said. “I am waiting for my lawyer and engineer to finish the plan first.” He also mentions that more money must be raised, which he hopes can happen at one of the big festivals that regularly take place here. “At new year we have 2,000 to 3,000 people,” he noted. With the site already attracting so many visitors of Cambodian and Vietnamese descent from all around the region, a new temple is sure to attract even more.

Sokhoeun showed me the shrine building at the back of the property, which contains an impressive golden Buddha surrounded by an intensely colorful array of flowers and flags, candles and incense, paintings and statues.

To the east of the property is an unfenced rail line and the former U. S. Gypsum site. Just beyond those lie the Schuylkill River. Sokhoeun expresses interest in merging this land with Bartram’s Garden, all of it threaded together by Bartram’s Mile and the expanding Schuylkill River Trail.

The prospect of a multicultural superpark, one with the peaceful presence of Buddha, is an exciting one indeed in this postindustrial part of the city.

To launch the gallery, click any of the images below.