A Piece Of Wild West History In Historic Wash West 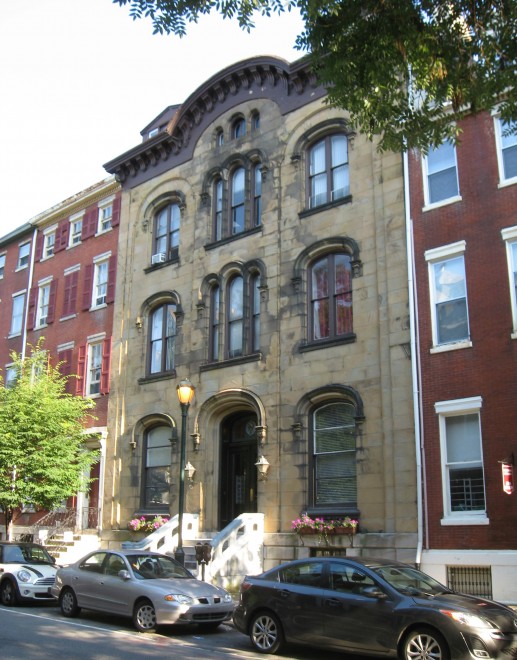 On the 1100 block of Spruce Street, a wide stone-faced building stands out from its red brick neighbors. Like the old Lincoln Institute around the corner, this 156-year-old classic constitutes yet another chapter of the relatively forgotten Native American story in Washington Square West.

In the mid 1850s, William Welsh, wealthy merchant and lay Episcopalian leader/benefactor, purchased the two vacant lots just east of his staid rowhouse at 406 Spruce (now 1126 Spruce), and commissioned Scottish-born architect John Fraser to design him a large extravagant mansion to fill the 41′ x 139′ space. It was a transitional period in Philadelphia architecture, when Greek Revival had given way to experimentation with new kinds of shapes, forms, and materials. 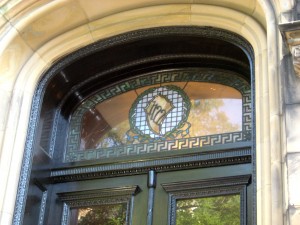 Welsh’s new house was no exception. The double-wide, three-story, 11,273 square foot row-mansion would sit behind a thick, heavy façade of yellow Cleveland Sandstone sitting on a base of Gray Sandstone from the Pictou Quarry in Nova Scotia. Archways accentuate the windows and front door, with narrow arches forming a spine down the center. The marble cornice curves over the center, complimenting the rest of the façade’s three-dimensional elements. In his book Frank Furness: Architecture and the Violent Mind, Michael Lewis notes that the Welsh House was probably on the drawing boards about the same time a young Frank Furness started apprenticing for Fraser.

The new house was completed in 1857. Here, William Welsh and his wife, Mary, grew heavily affected by reports of the ill treatment of Native Americans in the West. One particular incident in 1862 convinced Welsh to dedicate the rest of his life to their stewardship. In this incident, Santee Sioux Indians in Minnesota waged war on white settlers, angry over broken promises from the U.S. Government that led to their starvation. As fighting raged, Indians who had converted to Christianity convinced the others not to attack an Episcopalian Mission that had been established there. Welsh therefore believed that conversion to Christianity was the only way to save Native Americans.

Welsh worked to improve conditions for Natives over the next few years through the Episcopal Church. He visited Native Americans in the West and issued recommendations to committees he had helped form within the Church. He and his wife Mary then set about focusing the Church’s Women’s Auxiliaries toward missionizing Natives, forming the Indian’s Hope Association, operating out of his Spruce Street mansion. This organization formed missions and schools throughout the West. 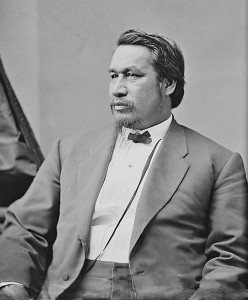 In 1868, William Welsh, noting how corruption and malfeasance sickened the distribution of government resources to Indians, gathered with other wealthy men representing different Christian denominations. These men created a committee imploring President Ulysses S. Grant and the Secretary of the Interior to hand over the handling of the future of Native Americans to Christian philanthropists, partially with the goal of converting them to Christianity. The committee met with Grant in March 1869 and Congress passed a bill the next month authorizing the President to establish a watchdog group called the Board of Indian Commissioners. The Board worked in concert with the Secretary of the Interior and Office of Indian Affairs (now called the Bureau of Indian Affairs) to control the disbursement of funds and resources to Native Americans.

Though considered a great accomplishment for Welsh, it didn’t last. The Commissioner of Indian Affairs, Brigadier General Ely S. Parker (born Hasanoanda, later named Donehowaga of the Iroquois), butted heads with him. Parker initially endorsed the watchdog group but later disapproved of the fact that the Protestant-only Board did not welcome any Native American members and pushed for Indian conversion to Christianity. An angered Welsh resigned from the Board only one year after its formation. He went on to publicly denigrate General Parker, calling him “but a remove from barbarism” and badmouthed the Board of Indian Commissioners for the rest of his days.

Undeterred, Welsh and his wife continued to be ardent Native American activists, visiting the West often to report findings back to the U.S. Government and other Christian philanthropists. After William Welsh’s death in February 1878, Mary moved to Strawberry Hill and continued to operate the Indian’s Hope Association out of the Spruce Street house until her death in 1898. Their nephew, Herbert Welsh, also became a Native American activist, forming the Indian Rights Association in 1882.

About a decade after Mary Welsh’s death, the Presbyterian Church purchased the old Welsh House. They had building contractor Frank E. Wallace alter the interior into a school building and moved their Philadelphia School for Christian Workers of the Presbyterian and Reformed Churches there, opening on September 22, 1912. This school renamed the building “Deaconess House” and trained women for work in missions and churches. The two-year program offered courses in bible study, sewing, “invalid cooking”, music, hospital training, and gymnastics. The school was successful enough by the 1920s to spread into the rowhouse next door (Welsh’s home before the mansion), creating a shared courtyard used by the two properties today. Often, graduates from this school would be sent to missionize Indians in the West.

In the early 1930s, the Tennent College of Christian Education absorbed the Deaconess School and briefly occupied the Welsh House until moving to Overbrook in 1937. That college was later absorbed by the Princeton Theological Seminary. In 1938, real estate speculator Samuel Goldman converted the structure into a residence, calling it the “College Building.” Over the next few decades, the surrounding neighborhood would become something of a rooming house district, the buildings along Spruce becoming slums with substandard living conditions. One account from 1961 described this part of Spruce Street: 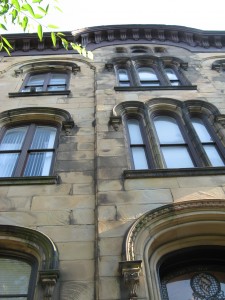 The houses are handsome, or were once upon a time, though the sidewalks in front of them be covered with slicks of refuse and garbage. Bugs, including some abnormally large ones, migrate through the sewers and stairwells.

On January 6th, 1965 a fire started in the lobby of the building, by this point sporting its current name, College Manor Apartments. Due to a delay in calling the Fire Department, four residents lost their lives. Damage from this fire is still visible on the structure’s yellow sandstone façade.

Samuel Goldman’s descendants held on to this property until 2008, when they put all of the family’s apartment buildings up for sale. The current owners of these buildings bought the whole set for $8.6 million, this one being $3.04 million of that deal. Wash West neighbors hold high hopes that the new owners will renovate William Welsh’s former home to its previous grandeur.