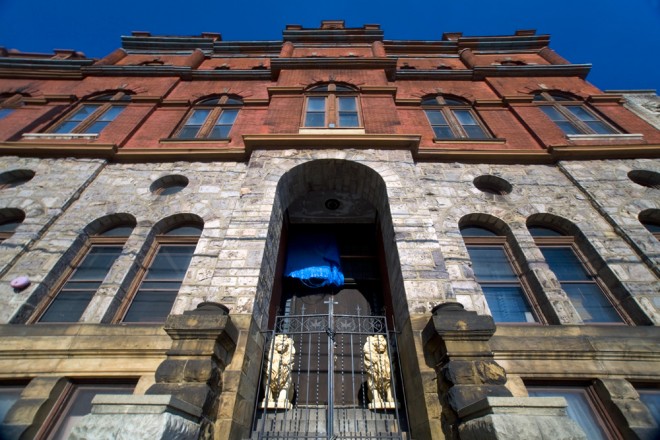 The lions are there to distract you from the tarp hanging above | Photo: Bradley Maule

This unusual specimen of Victorian Romanesque Revival near Norris Square in Kensington is a multicultural marvel: a German history with an Asian owner in a Latino neighborhood. Built in 1890, this great hall hosted several German Singing Societies—social organizations of German immigrants and their German-American descendants focusing on the vocal arts. The first of these was organized in Philadelphia in 1835 (yet another Philadelphia First) and the idea quickly spread across the nation. By 1849, every city with a German-descended population hosted multiple German Singing Societies and an annual meeting called Saengerfest brought together the thousands of members for a three-day concert/competition/raging party.

The Columbia Gesang Verein, a.k.a. Columbia Singing Society, formed in 1865, naming themselves after the location of their first headquarters at the corner of 5th Street and Columbia Avenue (now Cecil B. Moore). On April 3rd, 1889, the Columbia Gesang Verein confirmed plans to build an illustrious new hall for themselves at 2007-11 North 2nd Street, the site of an old brick chapel built in 1861 that was abandoned by the Second German Baptist Church, its most recent occupant. Two wealthy members of the organization helped pay for the construction of the new building, contributing $10,000 loans on May 14th of the same year. The short-lived architectural firm of Schaefer & Ausfeld (themselves German-American) was commissioned for the design.

Construction of Columbia Saenger Hall was completed in 1890, no doubt inspiring wonder with its unusual design. Starting at street level, the limestone base ascends to a granite façade with pairings of arched windows. Above these, a row of circular windows dots the arches below a shift to brick. The brick façade, accentuated by bands of stone, features a row of much larger arched windows, then a row of much smaller ones bookended by oculi. As if this wasn’t enough, the roof is topped by two bronze domes and an elongated mansard in the middle. 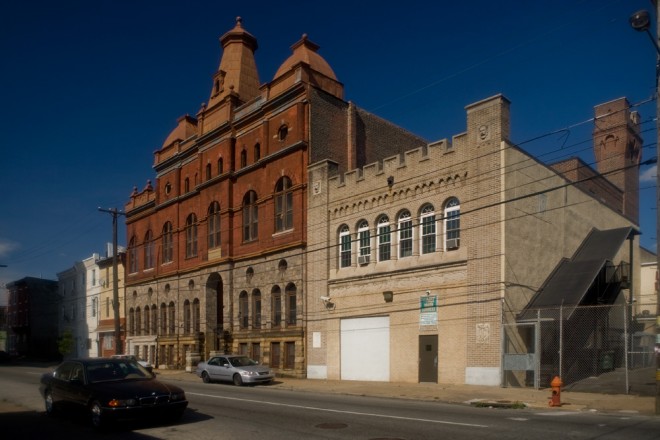 Columbia Hall in its environment; that old firehouse to the right ain’t so bad itself | Photo: Bradley Maule

For the next three decades, the structure—colloquially known as Columbia Hall (one of many buildings with this name in the city and nation)—hosted not only the Columbia Gesang Verein but also the many other Singing Societies who had no formal home. One of the largest leasable spaces in the neighborhood, the hall also hosted conventions, events, and trade shows.

Shamefully, the Columbia Gesang Verein wasn’t very good at paying back the loans they received from those two monied members. One of them, inventor and brewer Charles Schwerdfeger, took them to court over it. In the trial that took place in November 1904, the Pennsylvania Superior Court found that the club did not have to pay him the $4000 he was still owed due to a technicality in the original deal.

In November 1910, yet another German Singing Society, the Banater Maennerchor (Male Chorus), was formed by eight members who were suspended from another group. This society grew particularly quickly, boasting 72 male singers, 36 female singers, and 622 social members less than a month after forming. Both Germans and Hungarians were encouraged to join. The organization became so powerful that they took over the space at 8th and Columbia they were leasing from another Singing Society (Maennerchor Reingold) and absorbed that club’s membership.

Part of Banater Maennerchor’s appeal was that it wasn’t solely a Singing Society, but a full-on community outreach and advocacy group. They established a free school that taught German language, mathematics, science, mechanical drawing, and sewing to local children. They took in and trained local homeless men, one of whom, Karl Wambach, progressed enough to become an influential member of the Maennerchor. They would later add an athletic club, focused on soccer, to their repertoire. Seeking a much larger space, the club purchased Columbia Saenger Hall for $26,000 in March 1923, changing its name to Banater Maennerchor Hall. 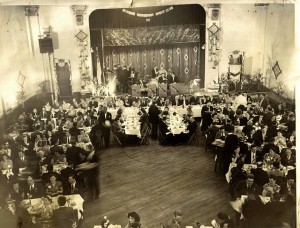 The move to this hall dramatically increased Banater Maennerchor membership. In a few short years, the club supported nearly 1,000 members and had added baseball, boxing, bowling, and “gym” to their athletic club, which was quickly becoming the Maennerchor’s primary source of income. A library and a chess club were added a few years later. By the end of the 1920s, the Banater Maennerchor Hall was bursting at the seams, hosting the singers, the school, the athletic club, the library, a traveling acting troupe, and even their own bank, Banater Savings & Loan. To help fit all this stuff in, the Maennerchor acquired the rowhouse next door at 2013 North Second and built a matching addition in its place, pushing the building’s square footage up to 17,000 square feet.

Like many social clubs, the Great Depression bore a striking blow to the membership of Banater Maennerchor. Through the 30s, the membership rapidly depleted while still providing assistance to neighborhood residents who were severely effected by the economic disaster. By 1938, many Singing Societies had disbanded and the few that remained had low active membership. By mid-1939, discussions regarding the consolidation of the remaining clubs into a organization were necessary. On October 24th, 1939, Banater Maennerchor joined with the others to become the United German-Hungarians of Philadelphia and Vicinity, or U.G.H. for short. The building’s name was then changed to U.G.H. Hall.

In 1946, the German-Hungarian Businessmen’s Association (formed by Banater Maennerchor members in 1933) sold their Oakford, PA property to the U.G.H. This enabled the U.G.H. to have two locations, colloquially known as the Country Club (in Oakford) and the City Club (U.G.H. Hall). In 1947, the “City Club” was falling apart and the U.G.H. spent $60,000 renovating the building into one of the premiere event spaces in the area. For the next 2 decades, the UGH Hall hosted numerous conventions, events, and tradeshows just in the way it did as Columbia Hall at the turn of the century. 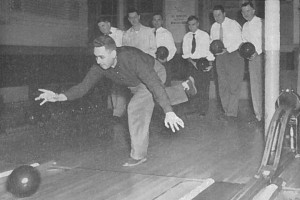 Did I mention the Hall had a bowling alley?

By the start of the 60s, the neighborhood surrounding U.G.H. Hall had changed enough that the German-Hungarian organization, who like so many across the country were trending suburban, no longer deemed it a suitable home. Focus had long shifted to the “Country Club,” where there was plenty of space for meeting, singing, and athletic events. Also, parking. With America well entrenched into its new car culture, the parking lot-deficient “City Club” was becoming more and more of a burden. After all, few members lived in the neighborhood and had to drive to the location. U.G.H. Hall was sold off in 1962, the proceeds used to build a new clubhouse at the Oakford property.

In 1980, Father Richard Hermanowicz purchased the abandoned hall. Dedicated to the revitalization of the neighborhood, he declared it the headquarters of the Polish Institute of America and immediately focused on renovating the dilapidated structure. With help from the Philadelphia Development Corporation, the building sported a new roof, windows, and fire suppression system by 1985. Father Hermanowicz lived at the small rowhouse opposite the building’s 1920’s addition, 2010 Palethorpe Street. He died in a car accident in March 2002. In 2009, what was left of the Institute put the building up for sale.

In 2011, the enormous property was purchased by a Pan Yu Zhen and Schicktanz Qiong Zhao for only $150,000 and was leased to an organization that wants to convert it into the American Goddess Art Museum. As yet, no signs of a goddess art museum are noticeable, but then goddesses work in mysterious ways, don’t they?