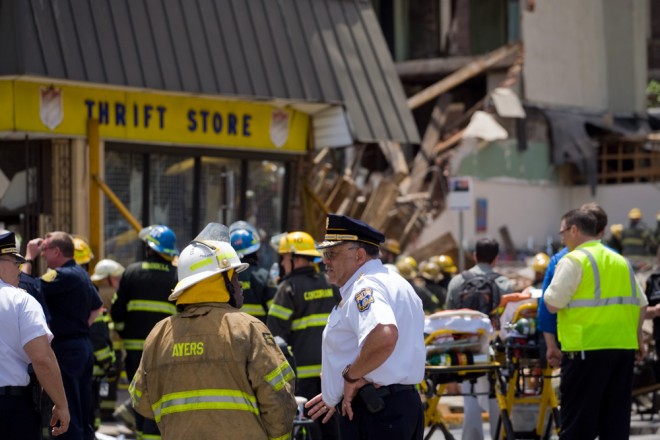 A building owned by a pornographer who associates with legendary slumlords being demolished by a contractor with a known criminal record, signed off by an architect affiliated with other noted slumlords . . . what could possibly go wrong?

Six people are dead because a demolition crew was shoddily pulling down a four-story building next to a one-story building—one that was active and full of employees and shoppers. As it turns out, four stories worth of falling concrete, bricks, and wood are heavy enough to puncture the roof of a building below it.

The Youtube video posted by Kevin2200 shows the care the demo crew took in taking down Hoagie City’s façade and sign. Which is to say: none. In the video, normal traffic passes by and the entrance to the 22nd Street trolley station—which I’ve used several times in the past week, often walking widely around the demolition site—is completely open and not secured.

A day later, search and rescue continues, an investigation has already been launched, lawsuits are surely being prepared, and a Rally fund has been started to assist the six families in the painful memorial services they must prepare.

And still further demolition remains. The back wall of Hoagie City, facing Ludlow Street and the Mütter Museum, still stands, open to the elements. Accuweather calls for “heavy rain and a thunderstorm” tonight, and a “thundershower” tomorrow.

Ed. note: Hidden City contributor Christian Suchecki was on the scene at 22nd & Market this afternoon. Click any of the images below to launch the gallery.