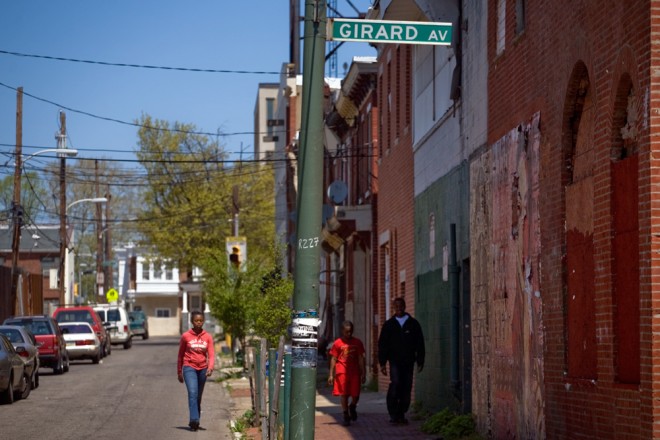 It’s a shame Philly Mag writer Bob Huber has to negotiate race on the verboten “dividing line” at West Girard Avenue, because this weekend might be the perfect time to hang up the hangups and see the city’s many colors on display. On Saturday (May 18th), locals from both sides of Girard will walk their terri-poos and sip suds to the funkadelic sounds of Philly’s finest mother-son rock outfit at the Brewerytown Spring Festival. (Hidden City will have a table with information about our Festival, so stop by and say hi.)

Now in its fifth year, the Brewerytown Spring Festival is an outgrowth of the Art + Soul Food Festival, which began in 2009, in effect a neighborhood outreach effort by organizers MM Partners. Founded by partners Jacob Roller and David Waxman, MM has been investing and developing real estate in Brewerytown since 2001. And since 2009, they’ve kept a storefront on West Girard Avenue, first at 2621, where, along with the Mural Arts Program, they helped facilitate the Shepard Fairey wheatpaste that still adorns the building, and currently at 2732. They also maintain a blog about the neighborhood at BrewerytownLiving.com. 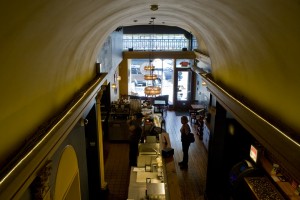 MM has been instrumental in bringing new residents and business to the neighborhood, most notably with Mugshots Coffeehouse’s second outpost (2831 W. Girard) and Icy Signs (2819 W. Girard). Icy, the studio/business/outreach led by celebrated artist Steve Powers (A Love Letter For You), has already brought its aesthetic to the West Girard storefronts of Best In Show pet grooming (2708 W. Girard) and the Chicken Master restaurant (2825), as well as a number of business foyers, exposed party walls, and newsstands.

They’re all significant signs of an awakening on the key commercial corridor. Positioned between Girard College and the Schuylkill River, this stretch of West Girard Avenue—the 2500–3100 blocks—merges the Fairmount and Brewerytown sections of the city; it has seen its ups and downs and ups again. Bill Greenlee, Councilman At-Large, was born and raised a block and a half south of Girard and remembers the heyday well. “In the 60s and 70s, Girard,”—pronounced in proper Philadelphian, “gee-RAHD”—“was the place to be. When the bars closed, there would be a line around the corner to get into the Blue Jay,” he remembers of the diner that’s anchored the corner of 29th & Girard for 37 years. “I guess it was around the early 90s when everything bottomed out.”

In 1990, Philadelphia set a record for homicides with 497. That year, 66 of those happened within the Philadelphia Police Department’s North Philadelphia West distinction, comprised of Brewerytown, Strawberry Mansion, and Sharswood. The violence and open air drug trade have largely gone away in the past ten years, thanks in part to the combined efforts of the PPD and community activists as well as the impact of Westrum Development Company’s massive Brewerytown Square housing development, which landed with a gentrifying thud on the neighborhood’s north edge.

“We’ve been very sensitive to the idea of gentrification,” MM’s Roller explains. “We’re not coming in to change the neighborhood. We want to add to its core, and forming relationships is key.” One of those relationships is with Brewerytown’s Little Leaguers at 27th & Master and at 30th & Jefferson. In addition to sponsoring teams, MM is, with an assist from District Councilman Darrell Clarke and the Mural Arts Program, partnering with Icy Signs to bring a giant mural to the wall behind the field. They’ve also helped organize community events like last year’s Food Truck Roundup and last night’s concert by Khari Mateen, the Grammy-nominated cellist who performed at Veterans Memorial Park, the small green space at 31st & Girard punctuated by the Freedom School mural featuring Malcolm X, Ella Baker, Martin Luther King, and Frederick Douglass.

Another important relationship has been that with Tim McAdams, owner of Best In Show. McAdams, who has taken the reigns of the Brewerytown Spring Festival, opened his business in 2005. “As a resident and consumer, I really think we’ve turned a corner here,” he says. “You’re starting to see infill throughout the neighborhood, and overt development along Girard itself.”

Mixed among long timers like the Blue Jay restaurant, Nagelberg Hardware, Girard Vet Clinic, and Italian Express (founded by Italian immigrant Mario Presta 27 years ago) are the newer storefronts like Icy Signs, Mugshots Coffeehouse, and Next City, the non-profit media organization with whom Hidden City also shares space at our CultureWorks office.

“We were really just looking for an affordable storefront,” Next City executive editor Ariella Cohen explains. “But [West Girard] is the kind of place where you can pick your kids up from school, stop and get some ice cream.” A Rita’s Water Ice opened in 2008 and employs neighborhood teens. 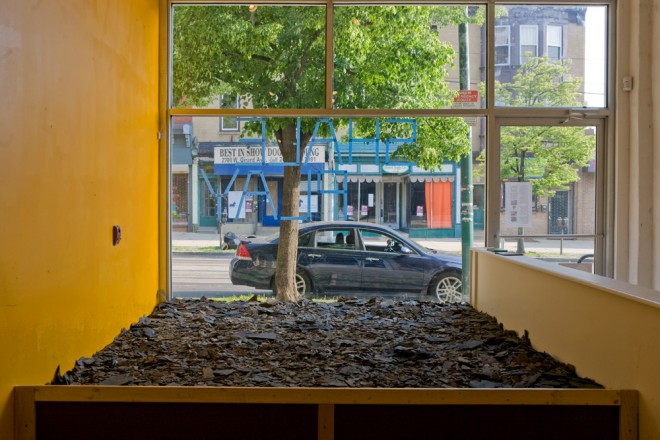 Next City’s Storefront for Urban Innovation currently features an exhibition by Jennie Shanker titled “Shale Play”—an exploration of the complexities surrounding the extraction of natural gas from Marcellus Shale by way of hydraulic fracturing. Previously, Tieshka Smith’s “Portraits of Brewerytown” initiated the opening of the Storefront. “Tieshka really helped us get to know the neighborhood,” says Liz Maillie, Next City’s project manager. Smith will be on hand at the Storefront for the festival, taking photographs for phase two of her “Portraits of Brewerytown” series.

One of the faces from the original set came from just next door to Next City. “Yeah, we’ve been here for a minute,” Jim Davis says of Music Box, the record store he opened at 2711 W. Girard in 1995. Music Box, whose biggest sellers are still soul, hip hop, and gospel, has been influential in the local urban music scene from the support of larger, non-local artists who’ve stopped in. Nas, Outkast, and Usher are among those who’ve come through to rap with Davis and do in-store performances. And then there was Jay-Z. “Oh man,” Davis says, “he didn’t even come in to the store. But we did a lot of promo for Def Jam, so he gets on the radio and says, ‘when I’m in Philly, I shop at Music Box.’ People lined up to get in after that.” Though he’s got some gripes, a lot of them with the Philadelphia Parking Authority, he looks at his 18 years on West Girard fondly. “We’ve definitely had our share of great times.” 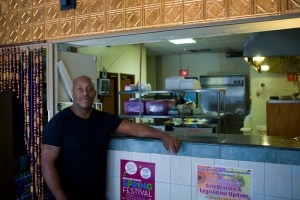 A block over at Butter’s Soul Food, Kevin Bell agrees. “We’ve had ups & downs, ins & outs, and turnarounds,” observes Bell, whose nickname Butter is tattooed on his right bicep. “But you weather any storm and keep going, let it go for what it know.” Butter’s had to literally weather a storm in October when Hurricane Sandy passed through. The maple tree in front of the store crashed down in two parts onto the sidewalk and Girard Avenue. “I hate to lose that tree,” Bell says, adding, “I love trees—but it’s gotten me some new looks,” since the tree’s canopy had previously obscured his sign.

Bell, who lived half a block south of Girard on Cambridge Street for fourteen years, said he was fortunate to have the soul food restaurant fall into his lap, albeit in a sad manner. Previously, Bell had worked with Shirley Allen as a chef at Ms. Tootsie’s, Keven Parker’s stalwart South Street soul food joint. Allen started her own Shirley’s Soul Food in 2004, but was diagnosed with cancer in June 2005. With a need to convalesce, she handed the restaurant over to Bell, whose work gave her the trust she needed to make that decision. Allen passed away in December 2006, but not before seeing Butter’s blossom into the go-to restaurant on West Girard.

In the eight years that have passed, Bell has seen drastic improvements to West Girard. On top of the crucial addition of a supermarket, Bottom Dollar, last year, he notes, “security has been better, the lighting is improved, and especially, it’s been cleaner.” The last point has a lot to do with the Fairmount Community Development Corporation, who have funded a weekday cleanup and installed a number of trash receptacles, including Big Belly Solar bins.

Angie Vendetti, owner of Mugshots and a board member of Fairmount CDC, has seen a marked improvement from the cleanup and trash cans in the two and a half years she’s been open on West Girard. (The original Mugshots opened across the street from Eastern State Penitentiary in 2004 and is now at 1925 Fairmount Avenue.) “It is cleaner, but the trash cans are just a start,” she says not only as a small business owner, but as a resident living a half block south of Girard. “We need to get everyone to use them, and have litter laws enforced.” Taking it a step further, she says, “what we really need is to keep growing businesses that encourage a healthy lifestyle; bike shops, cafés that serve organic food, and the like.” 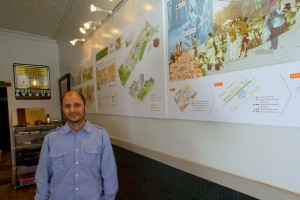 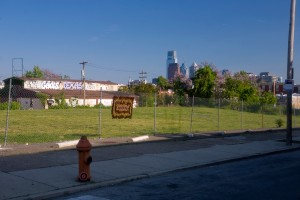 That line of thinking jibes with MM Partners’ strategy for growth throughout the neighborhood. “We’ve focused on Brewerytown in a comprehensive way,” Jacob Roller says, “looking holistically at Girard Avenue.” In other words, in order for the outer reaches to thrive, they need an artery that’s alive.

Tim McAdams, the pet grooming store owner, is not only the head of this year’s Brewerytown Spring Festival, but also president of Fairmount CDC. As such, he naturally blurs the lines between the two, and encourages the same. “We’re really seeing the blending across Girard between Fairmount and Brewerytown,” he says. There’s vested proof, too. Rybread, the popular sandwich shop on Fairmount Avenue, is like Mugshots, opening a second location at 2816 W. Girard, this one with beer: Rybrew. Locals with excitable tongues can also look forward to Shifty’s Tacos, opening next month from the kitchen of Honey’s Sit ‘n Eat (2730 W. Girard).

Like East Girard in Fishtown, South Kensington, and Northern Liberties, West Girard has patched its wounds and continues to reinvigorate itself to provide the lifeblood Fairmount and especially Brewerytown so desperately need. And as Center City grows north while Temple grows south, Broad & Girard is poised to become the crossroads of 21st Century Philadelphia. There’s a lot to see from the window of the iconic 15 trolley.

Including, tomorrow, the Brewerytown Spring Festival. We’ll be here from noon–5, with food trucks on the lot at 27th & Girard, with music in front of Murry’s at 26th & Girard, and with vendors lining Girard Avenue from 26th to 29th. Come and see us, Bob.