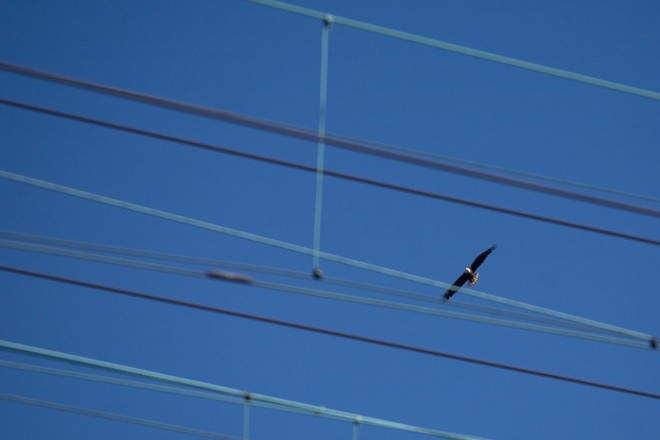 Bird on the wire: a bald eagle circles over the Amtrak and Septa catenary wires at Girard Avenue | Photo: Bradley Maule

As last week’s string of gorgeous days coalesced into a picture perfect spring weekend, I could think of no better Saturday cup of coffee than one 400′ up in the air at the Zoo Balloon. Walking across the Girard Avenue bridge at 9:30AM, opening time at the Zoo, I discovered a sign reading “We’re sorry, the Zoo Balloon is not operating today,” and I was told it was on account of the weather. Evidently cloudless sunny days with nary a breeze are not ideal hot air balloon flying conditions. My mistake!

A little miffed about the balloon, and having just visited the Zoo last week, I chose instead to cross Girard Avenue and start back across the bridge, stopping to take advantage of the picturesque day and get a photo of an Amtrak train crossing the railroad bridge; a charity walk on Martin Luther King Jr. Drive, a rowing event on the Schuylkill River, and normal Saturday morning traffic on I-76 populated the scene below. It was here, while waiting for the next train, that I spotted a bald eagle flying overhead. 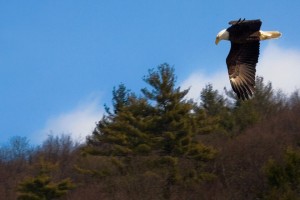 Prior to January 2009, I’d never seen a bald eagle in the wild. Generally speaking, I’d thought that unless you’re on some remote river in Alaska, seeing one in the wild was a rare treat indeed. In the three months I’ve been back in Philadelphia, I’ve already seen three.

Gary Stolz, manager at the John Heinz National Wildlife Refuge in Southwest Philadelphia, credits the Endangered Species Act of 1973 with the remarkable comeback of the bald eagle. “Back in the 60s and 70s, bald eagles were completely gone from Pennsylvania,” he says, adding, “they’d been gone from Philadelphia proper for over 200 years. Now there are over 250 nesting pairs across the state.”

Stolz has a firsthand view of the eagles’ success: a pair has nested on a small island at the Refuge for four consecutive years. There are also known pairs at Pennypack Park in Northeast Philadelphia and on Petty’s Island in the Delaware River, as well as 60-70 nesting pairs in South Jersey. Another pair that roosted at the Navy Yard last decade has flown the coop. 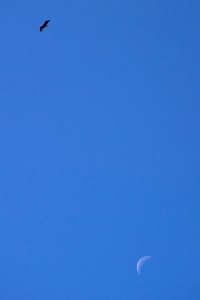 The bald eagle over the Schuylkill River on Saturday morning, Stolz observed, might have been one of the Refuge’s pair foraging for food. “Eagles are primarily fish eaters, but they’ll occasionally eat a duck or goose, or carrion,” he explained. “But it could have been a migrant, too,” he said, noting that a number of eagles pass through the Refuge when migrating.

There’s potential for viewing eagles this weekend, as the Refuge celebrates International Migratory Bird Day. On Saturday, a number of programs including guided bird walks and photography hikes begin at 7AM. Then on Sunday, the “Bald Eagle Walk & Learn” will encourage children and families to experience the birds in their back yard, from 8–11AM.

After hovering above the Zoo (which has a pair of bald eagles: Ritz and Glory), the eagle glided down the Schuylkill toward Center City, circling between the Commerce Square and Murano towers. I am certain it could have been seen from Rittenhouse Square and the Schuylkill River Park. From here, I lost sight of it.

That this bird, the quintessential American emblem—the one Franklin called a “rank coward” “of bad moral character” and which Audubon described as possessing a “ferocious, overbearing, and tyrannical temper”—would return to a major metropolitan area, with highways and airports and millions of people, is nothing short of amazing. Finally—some eagles worth watching in this town.