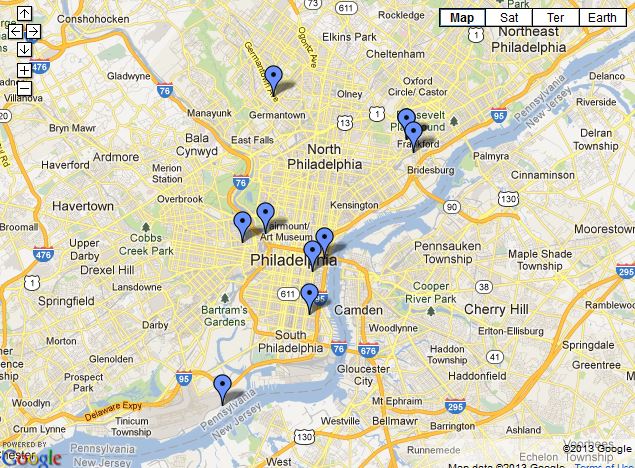 For reasons of time and sanity, as last weekend wore on through baseball games (little league and professional), street fairs, theater, and our Hidden City Festival opening reception, I ditched SEPTA and started taking taxis. Beyond the disheartening cost of a taxi ride (on Sunday, by the time my driver had circled west around 30th Street Station only to head east, the meter had hit $5), taxi rides force me to confront that old, but painfully enduring vision of Philadelphia as rinky dink town. This is all the fault of the map that’s affixed to the back of the front seats, facing the passenger (and next to the useless television screen) that shows only the most diminutive idea of Philadelphia barely beyond William Penn’s original grid–only about 1.5 percent of the actual Philadelphia.

Whatever the reason the PPA has chosen this laughably shrunken cartoon vision of the city that leaves out just about everything that is wonderful and interesting and practical, it’s based on faulty assumption and error: that most cab riders are skittish tourists afraid to cross the simplified borders of Center City and that the Philadelphia residents from all corners of the city who are most of the riders wouldn’t benefit by a real map that helps them navigate their very large and sometimes confusing city.

I can’t think of another large, complicated, sprawling city that seeks to infantilize itself in this way. We appear afraid of our own shadow.

And this is a central point of the Hidden City Festival: to broaden our concept of the city and expand the way we experience it; to draw us out of our own neighborhoods and onto someone else’s streets; to remind us just how large and complex a place this really is. This is something we try to do every day in our coverage on the Hidden City Daily, but reading about different places isn’t enough: we must get out there and immerse ourselves in the endless city. But only go by taxi if you have to.