Rebuilding Community: One Stitch at a Time 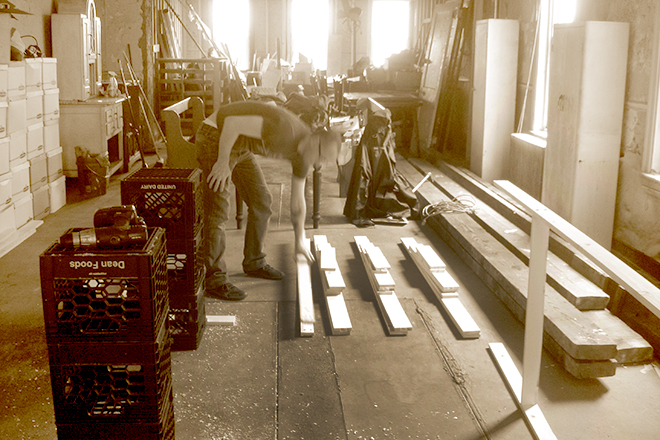 The 2009 Hidden City Festival catalyzed a rebirth in several places. At the old Disston Saw Works, the owners found value in a building used for the 2009 Festival and were able to put it back into use within the saw industry. Frank Furness’ Shiloh Baptist Church has been reimagined as a dance studio. And at Girard College’s Founders Hall, the long-dormant third floor is now used for events both affiliated with the College and those that are not; and Founder’s Hall itself has become a popular place for community events–Masterman’s annual silent auction, for example. 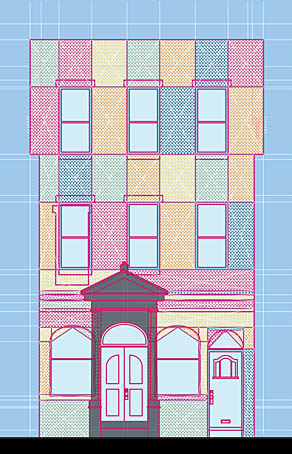 Now, in 2013, the 19th century Philadelphia row house synagogue Shivtei Yeshuron Ezras Israel, founded in 1909, is one of the Hidden City Festival sites where new life is already transforming the building in ways the founders never could have envisioned.

Philadelphia knitting pioneer, Andrew Dahlgren of ADMK, has arrayed modern knitting machines within the long shuttered upper level space of the synagogue. He is inviting the public to build something big—really big. With six weeks to work with, Dahlgren wants you to help him cover the whole shul (synagogue) in a knitted garment! One might say all this secular activity is sacrilegious. But one might also view these stirrings as building community which, in this case, will also help to restore religious function to this humble yet venerable building.

“The most wonderful thing about these machines is that they were made for the whole family to use, your grandmother, your seven year old. How many things are like that now in our society?” asks Dahlgren. His enthusiasm keeps building as he sees his knitting manufacturing ideas and concepts bearing fruit on a larger scale. 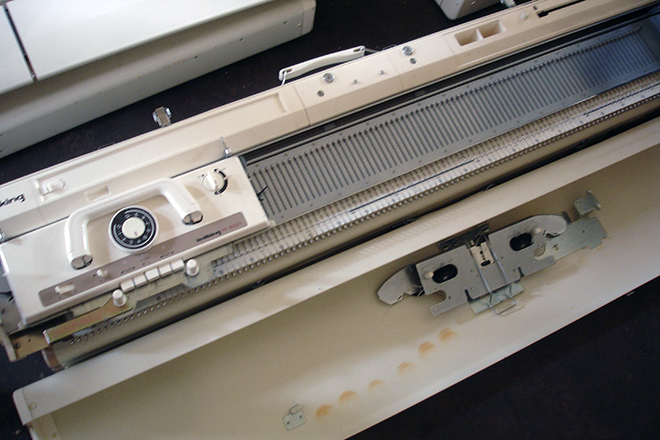 As the huge building sweater begins to take shape (starting today) and news travels, what will be the followup vision for Shivtei after this June? How far might the festival’s excitement and momentum carry it? We come back to late Philadelphia architect Henry Magaziner’s insight that “the best way to preserve an old building is to use it.” Steering that process, however, is to navigate uncharted territory with a high degree of altruism that transcends the imperative of fundraising.

This spirit reverberates through time since Shivtei Yeshuron was founded by immigrants “just off the boat” who also built community and a place of worship out of found space. 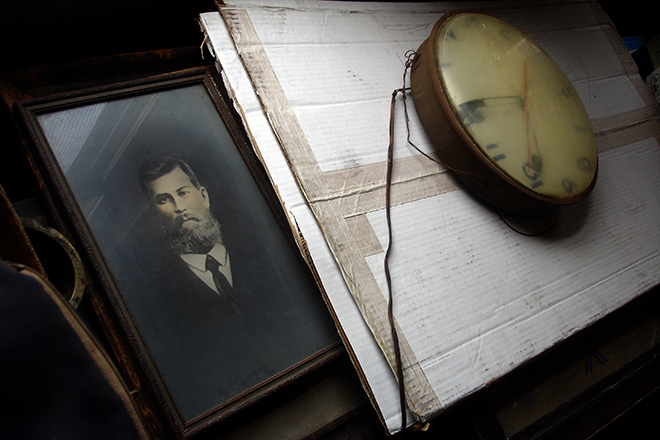 Remnants of a synagogue’s past | Photo: Joseph G. Brin

Hidden City Festival 2013 brings Dahlgren together with Morris Levin, a local business consultant and active Shivtei congregant who initiated Shivtei’s inclusion in the Festival. The potential synergy between Shivtei and ADMK could propel collaborative ideas sprung from the Festival. The following conversation with Morris Levin and Andrew Dahlgren speculates on that future:

Morris Levin: My longer term vision for Shivtei (as a board member) is to support growth of the congregation for Jewish community celebrations and observances. I want to use the second floor, specifically, and the building, in general, for multiple purposes including art, music, and education. I want to have initial plans for (Shivtei’s life) post-Festival, including music and arts events.

I welcome a post-Festival, longer term presence or plan for Andrew and ADMK at Shivtei. I have remarked to Andrew that I am open to this. I am also mindful to see how we all do together in May and June. I would like all of us to be so pleased with the success that a long term plan is a viable option. I also want to respect Andrew’s vision as the director of his initiative; after the Festival, Andrew may want to take this to a different location.

Andrew Dahlgren: I do think there is an opportunity to discuss how to leverage something existing to (re)build something new.

I see the Hidden City Festival as an incubator to test ideas, build new connections, and see what maybe can be uncovered. What always follows events like this—I experienced this after the brief event I did at the Art Alliance—is a reflection/evaluation period where you now have a new situation (more connections, more information, more possibilities) that you have to evaluate and move forward with some and not others.

I think what is unique about our situation—Shivtei + ADMK—is we are using the festival/Hidden City energy to kickstart the next development.

I’m finding more and more in my work that there are lots of motivated people who would do more, act more, participate more if there was a set of plans, recommendations or best practices—this applies to all kinds of work. We need more models to learn from so that we aren’t constantly expending the same energy again and again. If something works, great, share how it happened in a clear, concise way; not to replicate it 100% exactly but to inform others about how it can happen. There isn’t a school for learning how to revitalize community hubs, let’s educate each other… 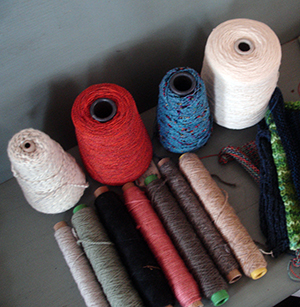 Shivtei could act as a model—where the process of building a group, a community, introducing events and initiatives, etc.—for creative reuse so that the other sites (those involved in HC and others) could pick up the “guide book” and get going.

ML: I like this a lot. It would be interesting if we could obtain grant money to do this together. This could fund working on this project.

AD: At the press conference there was mention of the 2009 sites. Due to the attention the sites got, a couple buildings were saved and re-energized and are now in use. How and why were those successful and the others weren’t….

ML: What happens post-Festival? I want to launch long term build out for Shivtei, indeed, based on a narrow purpose of revitalizing the liturgical congregation, and second, in a broad, 2013 mindset, creating a true community multipurpose space. 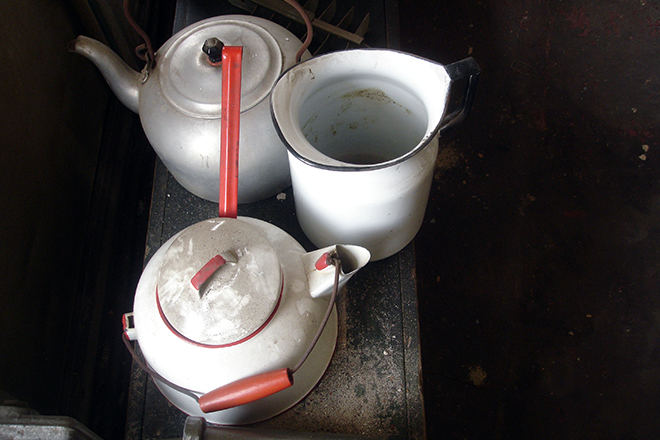 ML: ADMK is a fit for the second floor at Shivtei because it educates in craft textile and because of its express goal in restoring local fabrication which generates jobs and revenue in local neighborhoods matching one of my goals in supporting the restoration of Shivtei. And because Andrew makes really lovely pieces and it’s a pleasure to have that kind of craftsmanship going on in the building.

By way of concept on my side, Congregation Shivtei Yeshuron Ezras Israel is a religious organization of which Rich Sisman is President of the Board. I proposed the creation of the “Shivtei Yeshuron Independent Beneficial Association” as non-sectarian, not for profit community organization with offices at 2015 South 4th Street, to program music, education, and revitalize the building, to the longterm benefit of the congregation, and the building, and the multiple, potential stakeholders. Like knitting machines. Or midwives meetings. Or lecture series. Or music. And so forth.

Dahlgren, for his part, scoffs at the current buzz around 3-D printing, “These machines were doing that a hundred years ago! It’s about the power of human energy and capital. We can work at any scale.”

A sweater for your poodle? Not a problem, he says. 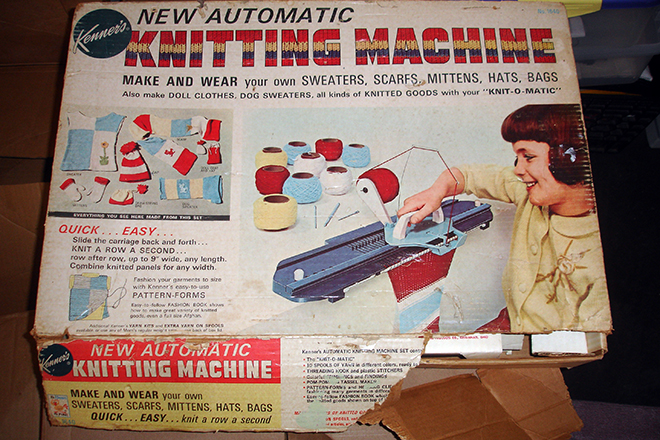