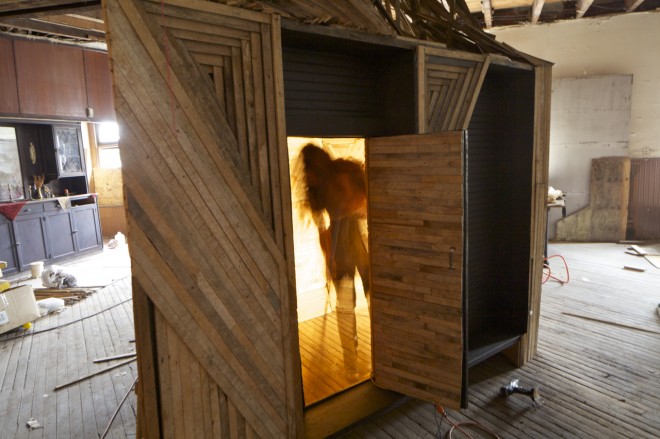 Across the city, as I write, artists and volunteers are busy cleaning and fixing otherwise locked-away spaces in preparation for the Hidden City Festival. Electrical lines are being installed as needed, generators hooked up, emergency lighting wired in, doors and windows fixed–oceans of coffee and Mountain Dew are keeping the whole operation going. At almost every site, the artists are erecting intricate sets-rooms-sculptures-buildings, in some cases utilizing materials and objects found on site.

And not just at our nine sites. On South Broad Street, a team of garden designers is finishing up transforming the ever evolving vacant lot across from the Kimmel Center into a beer garden and casual outdoor meeting space and restaurant that will open May 29. The work on the lot is strikingly elaborate, even though it will only remain until October. You really can’t half-ass a restaurant, or a garden, if you want it to capture people’s imagination.

We’ve become quite accustomed to spending a great deal of effort, and energy, on these kinds of temporary installations; their constant churn flavors our lives and like street fairs and festivals–this coming weekend is packed with them–they expand our sense of place.

But it is also quite apparent that in this era of shrunken expectations and shriveled budgets, and the enduring privatization of wealth, we can’t seem to build anything big or permanent or lasting. Great plans sweep across my inbox for transit expansion–the charm of walking from Pattison Station to the Navy Yard is wearing off–covering a section of Interstate 95 for the long anticipated reconnection of the river and the city, for finally building out the 30th Street rail yards, the lower Schuylkill, the airport, the port…and how much of this will really happen?

The prevailing notion is that under these circumstances you do what you can; small interventions can and do sometimes lead to eventual transformative change. This philosophy underlies the Hidden City Festival; our hope is that by animating latent sites it is possible to catalyze change. Big, permanent infrastructure projects anyway deliver mixed results: they get mired in corruption and laden with bureaucratic waste and they aren’t nimble–projects decades in the making can’t easily adjust to demographic change.

And all things, even the permanent things, are ephemeral; why kid ourselves?

Still though, we desire immortality. It’s why we still build in brick even as material scientists in our own city are inventing new building forms and fabrics: brick seems indestructible. It also represents a tactile connection to our history. A city in a certain sense is the collision of the permanent and temporary, big ideas and small lives, the girth of centuries and glimmer of the moment. We need both of course–in some kind of effective balance–in order to survive.