Of Reverence And Ritual At Hawthorne Hall 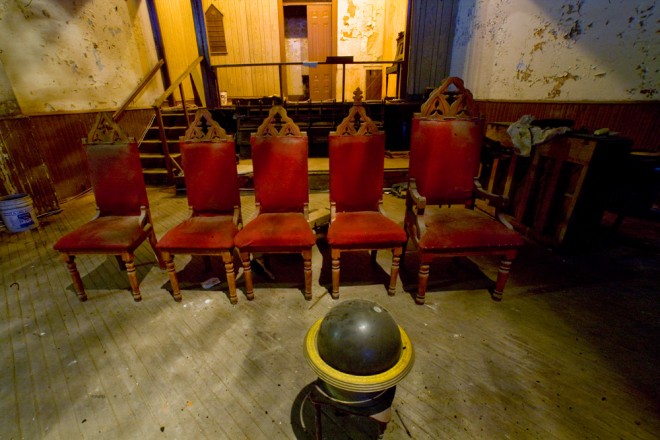 No one knows but the Grand Puba what goes on at Hawthorne Hall | Photo: Bradley Maule

In West Philadelphia, the would-be intersection of 39th and Hamilton Streets has its corner cut by Lancaster Avenue. On this slight diagonal in 1895, speculative developers Arthur Wright and Adolphus Prentzel constructed a gracefully unified block of mixed-use buildings, an impressive gateway to the traveler from the Main Line and Lancaster en route to Philadelphia. At present, the mixed uses include one owned by People’s Emergency Center Community Development Corporation (who hosted the Lower Lancaster Avenue development plan, whose “Make Your Mark” campaign sign is visible on the building’s façade), the home offices of web developers Solution Media, and Zara Bar & Grill. At the time of its opening, those mixed uses included a drug store, a post office, and various fraternal organizations.

The various fraternal organizations, including the Order of Odd Fellows, the Irish National Foresters Benefit Society, and the Knights of Pythias, made use of Hawthorne Hall, a wedge-shaped portion of the row curving along the corner of Lancaster and Hamilton. With a stage, balcony, and theater seating on the second floor, the Hall was used for meetings, performances, boxing matches, and in more recent years, church services.

With our 2013 Festival, which kicks off in three weeks, the art collective Rabid Hands will bring ritual back to Hawthorne Hall. Using materials gathered within the site and from around the city, the artists will create the Society of Pythagoras, a brotherhood replete with an initiation process, an oath of secrecy, and perhaps most importantly, access to a clandestine club and its space. This photo essay is a preview of the space—a “before” for which the transforming “after” is happening now, in the approach to the festival.

For more on this project, visit the 2013 Festival web site HERE.

Click any of the 10 images below to launch the gallery.