Of Philadelphia Maps And Mapmakers 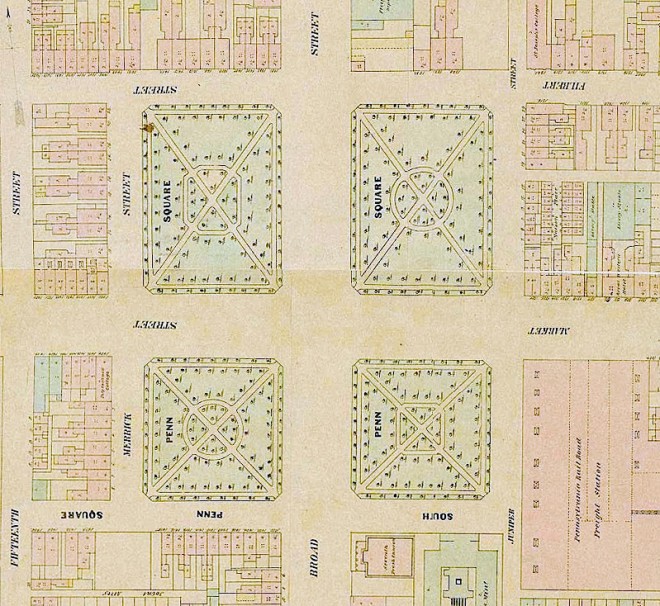 Walter S. Bromley, Samuel Lightfoot Smedley, Hexamer & Locher, J.L. Smith… If you’ve been reading Hidden City (or if you frequent PhilaGeoHistory), you’ve seen the names—usually tucked into a photo credit beneath a small detail from a map or lithographic image. Major mapmakers from the golden age of Philadelphia maps. Together, the atlases produced by these men and the hundreds of surveyors, draftsman, lithographers, and printers who toiled under them capture the development of the City during the period of its most significant growth, and at a detail as close as 50 feet to the inch.

When viewed one after the other, these atlases allow you to page through time, peeling back the onion decade by decade, as the City expanded, grew more complex, and repurposed existing land. With so much available detail, the development of nearly any plat of land in the City can be observed from the time it was farm or wilderness, through the extension of the grid around it and the various buildings that have occupied it, down to the present day. Moreover, these maps are simply beautiful works of art, providing a graphic link to the history of the City.

“Philadelphia,” writes local historian Jefferson Moak, “is one of the few cities in the world to have been mapped before it existed.” Beginning with Thomas Holme’s 1683 map commissioned by William Penn, thousands of maps of the City have been produced during its over three hundred years of existence. Indeed for nearly a century, from the Revolution into the 1860s, Philadelphia was the principal printing and cartographic capital of the United States, with dozens of small firms churning out maps from a mapmaking hub centered around present day Independence Mall. 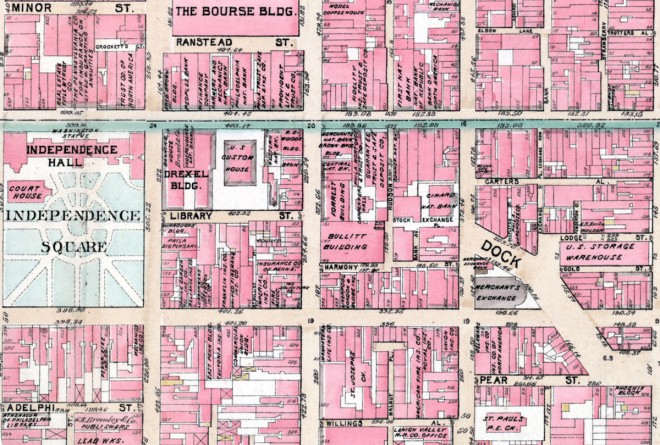 The maps produced by these workshops served many purposes. The earliest maps, such as Holme’s, or the much reproduced Scull and Heap map, were published in England as a means of encouraging settlement and land purchase in the new colony. Later maps were made to aid with navigation of the rivers, to provide for military defense or plan railroad routes into the City. Later still, as the City became more settled, maps, such as those included with Henry Schenck Tanner’s guidebooks in the 1820s and 30s, helped tourists and new residents find their way around the bustling City. Still others, including “bird’s-eye-views” popular from mid-century, melded mapmaking and landscape for purely decorative purposes, offering grounded residents an imagining of how grandiose their city must appear from above.

The most important form of map during the first half of the 19th century was that of land ownership. Known as cadastrals, these maps depicted not only geographic and political features, but also the location of principle property owners. A good example, R.L. Barnes’ New Map of the Consolidated City of Philadelphia from 1855,  illustrates this detail, but also demonstrates the limitations of these maps by mid-19th-century. Cadastral maps by this time had grown quite large—maps of six feet square were not uncommon—but despite their size, as the city boundaries expanded to League Island and the farthest points of Chestnut Hill and Somerton, they were unable to provide close detail of the more densely occupied areas of the city.

At just this moment, as cadastral maps of usable proportions reached an information saturation point, developments in the fire insurance industry generated demand for even more detailed maps, at a scale never before seen and inconceivable on even the largest wall map.

Through the 1840s, insuring properties against fire had been the province of small local firms. These establishments 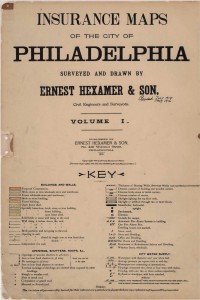 insured customers in their own neighborhoods, where an underwriter could easily walk to inspect new properties and evaluate the risk of fire prior to issuing a policy. As industrialization and urbanization spread and the value of property increased, larger firms with greater capitalization were formed to insure the risk. These conglomerates were often located far from the buildings they were being asked to insure, and could not easily visit to determine what risk they were being asked to take. In order to collectivize the cost of inspecting full cities, specialized mapmaking firms were formed.

Conveniently, advances in lithography and mechanized printing were also making it possible to turn out small runs of maps cheaply, without having to laboriously engrave a new metal plate for each print run. This new technology made it economically feasible for the first time to divide the city across many printed pages, which could then be bound and sold together. With both source of demand and a means of supply in place, the Grande Dames of the Philly map game, the fire atlases, and later city ward atlases, took center stage.

The first fire atlas in Philadelphia was published in 1857 by Joseph Dietrich, Ernest Hexamer, and William Locher. These maps—which came to be known simply as Hexamer Maps—initially covered seventeen of the City’s twenty-four wards and were drawn at a scale of 50 feet to the inch. Hexamer’s field surveyors created rough freehand sketches with details and measurements of every property in the City, which were then added to the published maps. 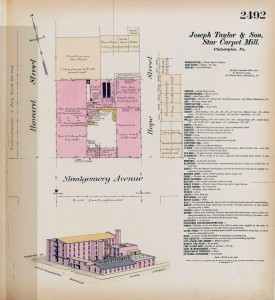 As cartography competition and technological advances grew, so too did the detail on maps; this Hexamer General Survey of a carpet mill lists lightning rods, waste collection, and night watchmen among its intricacies

Much like digital zoning maps today, these atlases coded every building according to a system of colors and symbols to indicate construction material, use of the property, and other design features such as skylights and thickness of bearing walls. Fire hydrants and stations were also marked and even, in later volumes, such details as the diameter and age of water mains and their average pressure at midday. Workers at Hexamer’s offices at 419 Walnut Street or other workshops hand painted each sheet with vivid aniline paint, using wax paper cutouts to guide them. These details, and specific notations of extra-hazardous occupations allowed skilled underwriters to determine at a glance all the critical information needed to evaluate fire risk and set their quotes.

The base layer of these maps, like the City atlases that followed, was the tremendous amount of survey data generated by the City’s Board of Surveyors, a unit which traces its roots to William Penn and continues to the present day. This Board has the responsibility for ascertaining property boundaries, laying out and regulating streets, and since 1854, maintaining the City Plan which depicts all city streets at an even closer level of detail than the insurance maps. As the unit’s web site proudly notes of its work, “property line disputes, street locations and land title litigation are virtually nonexistent” in Philadelphia. Many prominent publishers and mapmakers of the Nineteenth Century learned their craft working as city surveyors and made use of the skills they’d learned in their subsequent production of commercial atlases.

In order to ensure all information included on maps was as accurate as possible, company surveyors visited every property annually, and noted any changes. To keep already issued maps current between new editions, Hexamer featured an updating service, initially by recalling the maps yearly to correct them by hand, and later by pasting on “revision slips” when a correction was necessitated by new construction, alteration or change of use. 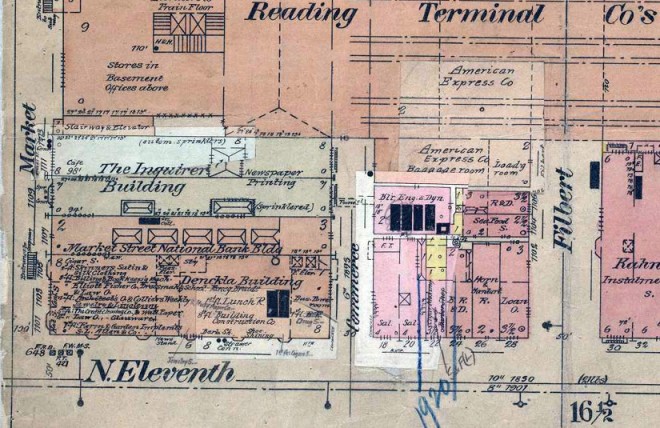 Between 1866 and 1896, the Hexamer & Son Co. also published General Surveys: isometric views of some 3,000 industrial and commercial sites, as well as a plan of each and a detailed written description of both the construction and operation of the works. It appears this sideline eventually petered out due to lack of demand for such detailed information. Meanwhile, a second series, revising the originals and eventually encompassing thirty-eight numbered volumes, continued to enjoy strong sales.

These new atlases were updated through 1916 when the company was finally absorbed by the Sanborn Company, which came to virtually monopolize the insurance cartography industry by 1920. “Sanborn maps” became ubiquitous, as they continued to issue updated maps through the early 1960s, when consolidations in the insurance industry made it possible for large insurance companies to maintain their own engineering departments to evaluate risks. 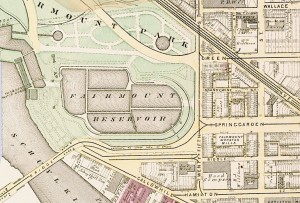 1875 map of what would become the Philadelphia Museum of Art by Griffith M. Hopkins

The advent of the fire insurance atlas was followed two decades later by city ward atlases, first published by Griffith M. Hopkins, and later by a former member of his staff George Washington Bromley, who with his brother Walter, published a set of thirteen volumes covering the entire City between 1885 and 1894. These commercial atlases were targeted to a more general audience than the fire atlases, and contained information such as political boundaries, geographic features, and planned but unopened streets. They were purchased by a variety of clients including real estate brokers, insurance and railroad companies, government departments, and individuals for private use. G.W. Bromley & Company eventually also published atlases of Boston, New York and several other East Coast cities. Following the death of the brothers, the company concentrated its efforts on New York with the final known imprint bearing the Bromley name published in that city in 1960. In addition to Hopkins and the Bromleys, three other lesser known publishers—George W. Baist (1886-1901), John L. Smith (1886-1912), and Elvino V. Smith (1903-1931)—each produced Philadelphia atlases during this period.

The golden age of these atlases waned in the 1930s, although the Franklin Map Company made efforts to produce new versions into the 1950s. The Depression and Second World War took its toll on demand, and competition from national publishers such as Rand McNally and others ate into what had formerly been a local trade.

Current day uses of the old atlases are varied. Architectural historians and planners use them to research the development of neighborhoods and specific buildings. City Departments use them, as this author can attest, to examine past ownership and uses of property. Social historians and ethnographers, including those at the Mapping DuBois Project use them to examine and illustrate demographic shifts in the city over time.

Local mapmakers including Michelle Schmitt, principal at Maneto Mapping and Analysis, use them to find inspiration for current online maps, which layer new demographic and economic detail over the same historic bones. These online interactive maps, just like their forebears, present a huge amount of data which would otherwise be trapped in tables and lists, in an easily accessed and evaluated format. As Schmitt notes, “there are so few objects that make the left and right brain work together,” to process both the beauty of the object itself and the wealth of information presented.

And of course, they make great illustrations for Hidden City articles.

The author would like to express his gratitude to Jefferson Moak, the dean of Philadelphia maps, and Richard Boardman, Head of the Free Library Map Collection, without whose work this article would not have been possible.