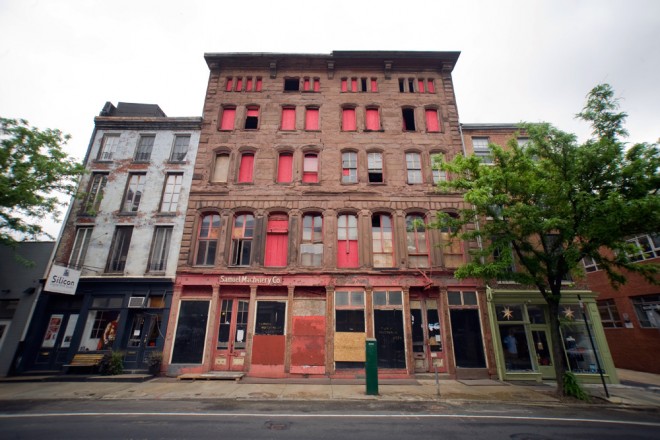 This Old City problem has been long exemplified by the Samuel Machinery Company Building at Third and Cherry Streets, an imposing brownstone that has been slowly decaying (and literally falling apart) for years.

Since 2007, the real estate development firm Electra LLC, which purchased the Samuel buildings at sheriff sale for $486,000, has been working–in fits and starts–to transform the property into apartments and retail. Now, with renovations going full-force, the developer expects to have the 14 planned apartments (12 one-bedroom and two two-bedroom) and a generous 4,500 square foot retail space spanning the entire first floor open by the end of next year.

The machine tool maker Samuel Machinery occupied the space for about a century until going out of business around 2005. As building violations piled up, Mike Mauro of Electra sought the Samuel buildings as a package. But one of the properties, 135 North Third Street, remained in litigation following the 2007 sheriff’s sale purchase, prohibiting the firm from moving forward with redevelopment plans.

“We needed both of the buildings for the redevelopment plan to make financial sense,” says Mauro, who adds that during the litigation process, the company made modest repairs to the windows and façade of 137 North Third Street, and even removed the fire escape that had previously covered the front of the building.

Electra was eventually awarded both properties in late 2011, allowing the company to move forward with the mixed-use redevelopment plan, which was already in accordance with existing zoning. This allowed Electra to avoid having to solicit Old City Civic Association’s input and enabled the firm to quickly consolidate the lots. By August of last year interior demolition and construction on new stairways and elevator shafts had begun. 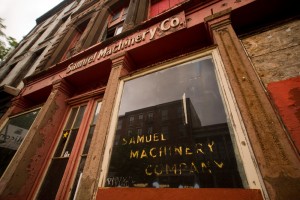 The ground floor of Samuel Machinery is tailor made (and zoned) for a retail operation | Photo: Bradley Maule

But even before that, Mauro says workers were busy clearing the building out of old manufacturing artifacts. “There was a lot of heavy machinery that needed to be moved out,” explains Mauro. “That’s a lot of work. The process took months to complete.”

With the building now cleared and the heavy lifting almost finished on foundation work, the developer recently obtained the building permit for the final 18 months of renovation.

Electra hasn’t confirmed a tenant for the ground floor space; Mauro says Electra is waiting to see who is interested. “It is large enough for just about anything,” he says. “It also has a large basement which could be particularly beneficial for a restaurant space.”