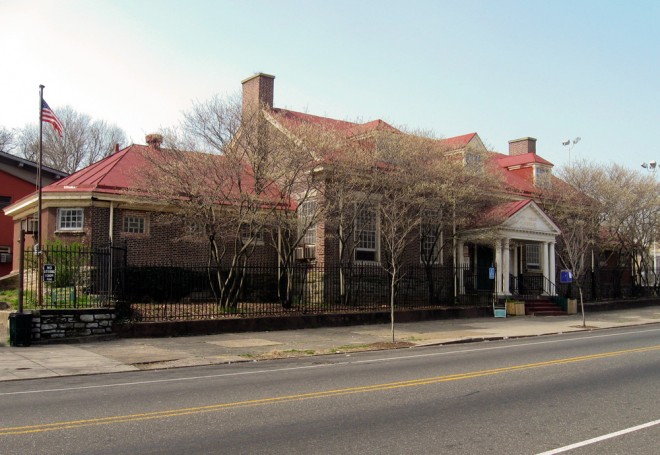 As the weather warms, the city’s youth seize the recreational opportunities afforded them, hitting the ball fields, basketball courts, and swimming pools. While newer facilities attract our attention as they come online, it’s important to remember Philadelphia’s older recreation centers—the ones that paved those new ones’ way. Happy Hollow Recreation Center, at Wayne Avenue and Logan Street in Germantown, is the oldest among them.

Opened in 1911, Happy Hollow is the oldest city-owned rec center building still in use for its original purpose. (Smith Memorial Playground and Playhouse, opened in 1899, was and still is private owned.) A historic building nomination is being considered by the Philadelphia Historical Commission this spring for its significance related to the playground movement in Philadelphia and the building’s architect, George T. Pearson. 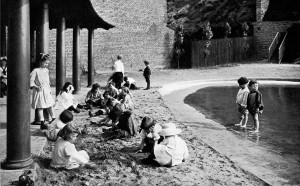 Happy Hollow was a direct result of an effort that took shape in Philadelphia after cities like Boston and Chicago had proven the benefits of supervised play for urban youth. Philadelphia’s playground movement began in 1893, when the Cultural Extension League, the City Parks Association, the Civic Club, and the College Settlement met and determined the need to open a playground the following summer. The city already had an ample supply of parks but lacked any playgrounds per se. The idea was to remove youth from dangerous, crowded city streets and provide areas where supervised play and healthy outdoor exercise could occur. Playgrounds were also credited with reducing crime—a popular saying at that time was “a playground built today prevents the building of a jail tomorrow.”

Happy Hollow Recreation Center was built on the site of a former quarry in 1911 with a design by architect George T. Pearson. It was commissioned by Edward Walter Clark and his wife, early supporters of the playground movement in Philadelphia. Clark was a millionaire banker, head of E. W. Clark & Company, a financial firm whose descendant is the Penn Mutual Life Insurance Company. He asked his wife to name the park, and she chose Happy Hollow, citing “the happiness to come to the little ones from the splendid gift, and the topographical location of the place situated in a hollow surrounded by tall bluffs.”

The Clarks donated the recreation center as a gift to the city of Philadelphia, and it was managed by the newly formed Playgrounds Association when it opened on April 29, 1911. With over 4 acres of land, Happy Hollow was considered at that time to be “one of the finest gifts the city has ever received.” The outdoor space included a baseball field, handball court, and tennis courts, as well as a wading pool and pergola which have since been removed and replaced with playground equipment. Unique to the topography of Happy Hollow is an elevated bluff, which was used initially by parents who sat and watched the children play in the fields below. Remnants of an iron fence can be seen from this lookout point today, but the view is mostly obscured by trees.

The architecture of the primarily red brick recreation center is quite restrained for its Victorian architect, George T. Pearson. Pearson’s typical work, primarily in northwest Philadelphia neighborhoods, is often referred to as “creative eclecticism” and includes several hundred large residences with angular features, along with numerous church buildings and even several factory buildings for the John B. Stetson Company. 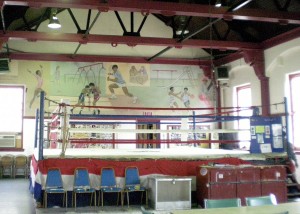 Hints of Pearson’s yearning for creativity are seen inside the recreation center, where the main hall features exposed iron roof trusses at the ceiling, and much of the original chestnut woodwork remains—some painted maroon in recent years but other areas left unpainted. Formerly used as a basketball court and space for gymnastics classes, the main hall now holds a boxing ring. Wings on either side of the main hall were originally used as separate showering and changing facilities for boy and girls, in addition to an attendant’s office. The showers have since been removed and replaced with a computer room and kitchen. The office space is still in use as such, and the walls of both wings retain their original lining of white enameled bricks from floor to enameled-steel ceiling.

The dormer windows are perhaps the most interesting feature modified. Originally operable from inside the main hall, the windows are today actually painted pieces of plywood fit to the window’s openings to match their original appearance.

Were he alive today, architect Pearson would likely scratch his head as to why so many of his firm’s fantastic large estates have been demolished, yet his one and only recreation center is still in use—despite some fairly significant deferred maintenance. Credit luck with the City’s decision to build a secondary gymnasium behind the recreation center in the 1950s instead of tear down the existing building. This foresight left us with the oldest tie to the playground movement in Philadelphia.

Kim Broadbent Kim Broadbent holds a Masters in Historic Preservation degree from the University of Pennsylvania, where she focused on urban redevelopment and the economics of historic preservation. She is the preparer of the Wayne Junction National Register Historic District and the pending Happy Hollow Recreation Center historic property nomination. She has moved eight times in the past nine years in Philadelphia, which might sound dreadful to some people but has given her the chance to live in many different neighborhoods. Currently a resident of Wissahickon, she also works in the neighborhood at Hanson General Contracting.