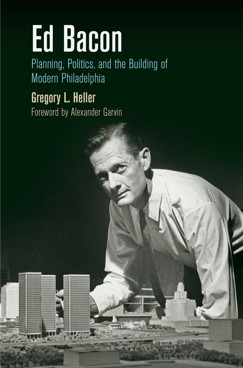 Editor’s Note: For about a decade, the accomplished urban thinker and practitioner Greg Heller has been imagining a biography of the visionary city planner Edmund Bacon. In 2002, when Bacon was 92 and Heller was 20, he became Bacon’s personal archivist. Now, his long-anticipated biography of Bacon is out, published this month by the University of Pennsylvania Press. The public is invited to the official book launch on May 16 at 6PM at the Center for Architecture. To register, click HERE.

About a year ago, working on the third episode of the documentary film series “Philadelphia: The Great Experiment,” my colleagues and I at History Making Productions began to conduct interview research on the role of powerful city planner Edmund Bacon on Philadelphia in the mid-20th century. Episode 3, “Promise for a Better City,” covers the period 1944-1964 (you can watch it HERE.) Like many of our characters, Bacon was well-cloaked in myth, misunderstanding, and cliche. So we asked everyone who came into our studio how they would describe Bacon and how they might assess his legacy.

The architect Hyman Myers knew him as a truly big picture visionary, who saw cities in their historic, economic, and societal context. Deborah Dilworth Bishop, the daughter of Mayor Richardson Dilworth, said he was “a very egotistical man and he was absolutely convinced that he was right all the time.” Penn urban historian Tom Sugrue called him “dogged and persistent.” Historian Scott Knowles of Drexel University noted Bacon’s role “at the periphery” of politics, which he said “gave him a chance to try ideas, fail, come back with a new idea.” Architect Denise Scott Brown said because he abandoned efforts at more aggressive public housing, and because his Independence Mall and Urban renewal projects “gashed” the urban fabric, “Bacon’s legacy to Philadelphia was evil.” Scholar Shan Holt credits Bacon with “saying a city is a place for people to live and so [it] ought to have…some breathing room, some moving room, some class.”

The conflicting responses point up a larger confusion about Bacon, his work, influence, and legacy. When we look at Philadelphia 2013, what can we assign to him–and what of it was his intent? What emerged from compromise? Bacon led the Philadelphia City Planning Commission from 1949-1970 and it wasn’t until very late in his tenure that he was also the city’s development director. City planners, though they sometimes loom large in our imagination, are rather powerless. Bacon’s two major urban development contemporaries, Ed Logue of Boston and New Haven and Robert Moses of New York, were in charge of development projects: they controlled the purse strings and the plans. 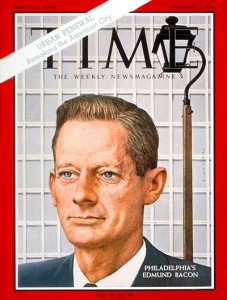 The situation was considerably different for Bacon in Philadelphia, said Gregory Heller when he sat for an interview. Heller is a senior adviser at the economic planning firm Econsult, and for years he’d been working on a biography of Bacon, who had befriended and then employed him in 2002, when Bacon was 92 and Heller was 20. “Ed Bacon arguably didn’t create the physical design for anything built in Philadelphia, with the one exception of maybe the Society Hill greenways,” he told us. “He had limited influence about how these projects turned out, and many of the ideas aren’t even his own. Some of them, like closing Chestnut Street to auto traffic was [Louis] Kahn’s idea, and Bacon heard about it and took it and put it into the plans and started speaking about it and it became associated with him. But most of these ideas weren’t originally his ideas. Many predated him by decades or were ideas others came up with, and once he was promoting it his scope was still very limited. Once the project started, other departments and their formal roles and money was on the table, he lost control of the project and was forced to step away.”

Bacon, indeed, was limited in his influence on Philadelphia, even as he appeared to control urban redevelopment at the height of mid-20th century government intervention in cities. And yet, Heller said, “Philadelphia is an interesting case study, because it’s maybe the singular case where the urban planning director became the face of the urban renewal movement…It was effective, because he sold himself as the face of the Urban Renewal program. But by doing that, he was able to sell Philadelphia as well.”

These kinds of contradictions seemed to mount in the life and career of Ed Bacon, who turns out to be both visionary and blind, progressive and reactionary. Heller captures an awful lot of it in his thorough and thoughtfully written biography, Ed Bacon: Planning, Politics, and the Building of Modern Philadelphia, brought out by Penn Press this month. This is the first biographical account of Bacon’s life.

Heller had previously written on Bacon’s influences in the 2009 Imagining Philadelphia: Ed Bacon and the Future of the City, edited by Drexel’s Knowles and also published by Penn Press, but here Heller is able to place Bacon in his widest and most fully conceived contexts as an operator in the Philadelphia political system whose ideas were always evolving (and sometimes–as in his shifting feelings about cars and highways–locked in two places at once).

twenty-one years, from 1949 to 1970, as part of a complex bureaucracy that shaped Philadelphia’s planning and rebuilding program through four mayors, during an era of population decline, racial tension, civic unrest, and changing federal directives on how best to invest in the future of changing urban America.

He was part of an international community of urban intellectuals that coalesced around the architect Oskar Stonorov. And he was, as our interviewees revealed, modest and imperious, forceful and charming.

Heller metes out Bacon’s development from Cornell University to Cranbrook, where he studied for a short time under Eliel Saarinen, to Flint, Michigan to his first City Planning Commission projects in Philadelphia–an attempt to forge a Philadelphia way for neighborhood redevelopment that respected the existing urban fabric while injecting green space and recreation areas into new housing developments. The first of these neighborhood plans was for West Poplar. Heller makes the point to develop Bacon as policy entrepreneur, who even at the get-go was largely motivated and worked relentlessly to achieve private sector and public support for his projects.

While the author spends ample attention revealing the contexts of the best known Bacon projects like Penn Center and Society Hill, he focuses largely on the planner’s interest in “planning for people”–rather than for industry or economic development. Bacon had broad ambitions to bring the American people–as late as the 1940s a thoroughly urban nation and as soon as the 1950s a culturally suburban one–back to the city. You did this, Bacon thought, through comprehensive planning of neighborhoods that would offer modern amenities. From this we get the nimbly achieved Society Hill Urban Renewal project, but also attempts to create a city within a city whole cloth in New Eastwick and in large parts of the Northeast. In these places, little of Bacon’s insistent vision ever really emerged. 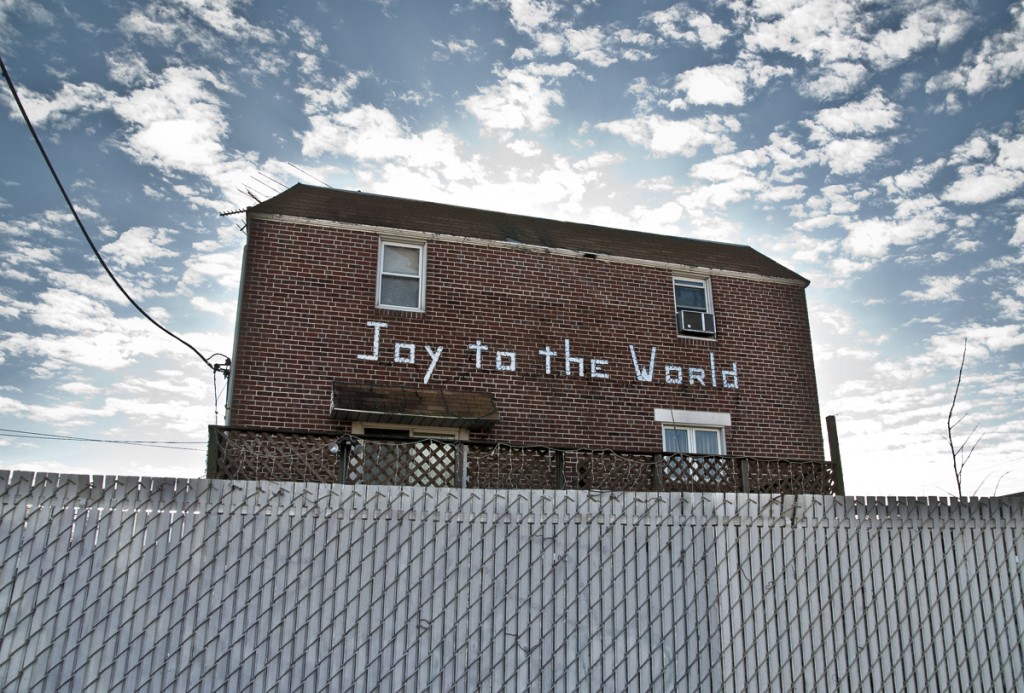 New Eastwick in 2012, 50 years after its groundbreaking | Photo: Dominic Mercier

One of Bacon’s most frustrating complexities is his humanism. He wanted desperately to present a clear, unified urban vision to compete against the suburban one, which he felt was winning the war of ideas for the way human beings would live in the world. (Never mind they might live in various different kinds of ways.) “If Philadelphia were to succeed,” according to Bacon, writes Heller, “it would be by establishing a firm conceptualization for the future of the city.” Yet his unified vision of the city tended to ignore its very human layers. Could a city possibly present a unified image? Should it even do so? Isn’t a city’s disunity arguably its most compelling facet? That there are divergences, contradictions, conflict, and confusion makes cities interesting and truly human–expressions of culture, class, and social identity. But Bacon wasn’t really interested in these things.

At the height of Bacon’s promoting his unified vision, in 1963, Jane Jacobs produced The Death and Life of Great American Cities, a manifesto in favor of a vital disunity. Bacon’s urban philosophy seemed quickly out of date–and out of touch.

He evolved, however, eventually arguing for cities as a solution to the energy crisis of the 1970s. He advocated a carless society, one that might match rather well with the dreams of bicycle and complete streets advocates of today. “For Bacon,” writes Heller, “the direction America and the world needed to go in required a significant change in accepted lifestyles, rather than simply a new source of fuel for private cars.” Perhaps then, this is how we ought see Ed Bacon now: not as a conflicted and cloudy view on the 1950s, but as a prophet of the urban world yet to come.