Days of Electronic Future Past

He’s got the whole world at his fingertips, but King Britt is coming home to Philadelphia | Photo: Kate Watson-Wallace ? King Britt Facebook

This Friday in Frankford, Hidden City Festival 2013 makes a sound. Or rather, it makes a whole lot of them. Curated by Philadelphia’s incomparable label-journal-producer mashup Data Garden, Heritage Electronics will turn the Historical Society of Frankford (HSF) into a most unusual sonic stage featuring three musical performances and two visual units.

As one of our festival sites, HSF is host to A/V Archaeology, a site-specific, interactive sound installation. Heritage Electronics is one of the concert presentations central to the installation. It’s 7–10PM on Friday (May 31), and features King Britt in a unique homecoming show. 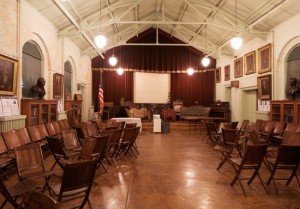 “This is a different style of programming for a concert,” Patitucci says, then admitting, “I’m excited just to be there.” Be there he will. Patitucci has curated both concerts scheduled at HSF for the festival, both this Friday’s and a second scheduled for Saturday, June 15th titled Contemporary Archives, which will mix modern digital media like Youtube and Archive.org to create new work.

In addition to King Britt, the renowned DJ and producer whose summer tour is taking him from Frankford to Paris and Ibiza, Heritage Electronics features two other musical performances and two video installations. Charles Cohen will play an improvisational set on the Buchla Music Easel, an early prototype of synthesizer. A collaborative set between Laura Baird on theremin, Gretchen Lohse on a viola run through electronic pedals, and Dino Lionetti of the 8-bit band Cheap Dinosaurs rounds out the musical bill.

During the performances, Don Miller (alias No Carrier), who has collaborated with Data Garden for two years (namely at Bartram’s Garden for their Switched On series), will provide video synthesizer visuals and Nintendo graphics during musical performances. In between sets, Daniel Rehn will amplify his wwwtxt project: selected conversations and texts from the early days of the internet (e.g. Usenet groups and hypertexts from Gopher) in digestible 140 character snippets.

“All of these ideas,” Patitucci explains, “are about exploring different media and how it interacts with repositories of information.” Repositories of information like the Historical Society of Frankford, for example. “HSF has an amazing collection,” he says. “We think of Data Garden as a digital museum of sorts, and HSF is giving us a physical space.”