Blazing Ballerinas And A Rampaging Elephant At 807 Walnut Street 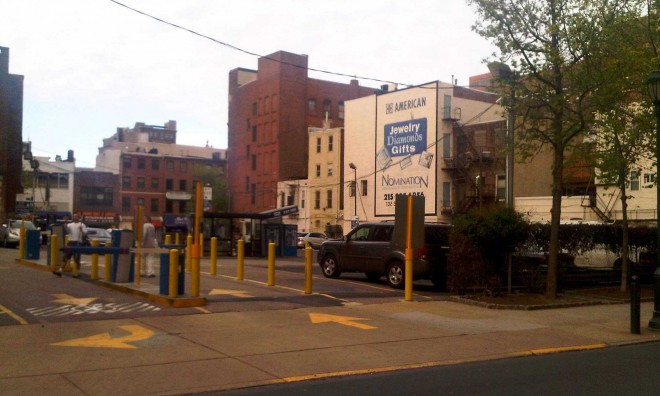 Current prospect of 807 Walnut Street, not much to look at | Photo: Harry Kyriakodis

Walnut Street Theatre, the oldest in America, opened on the northeast corner of Ninth and Walnut Streets in 1809 as a circus venue. But it’s not the only entertainment venue to have called that block of Walnut Street home. A stone’s throw away, at 807 Walnut Street, stands the site that hosted several incarnations of circuses and theaters. Alas, there’s no indication that this nondescript spot, now a Parkway parking lot across the street from Wills Eye Hospital, was once too a site for showbiz—and also for many harrowing deaths.

The first building erected there, in the 1830s or 1840s, housed the National Circus and it featured a menagerie called the Zoological Institute. Circus animals, including elephants, roamed around 807 Walnut Street. 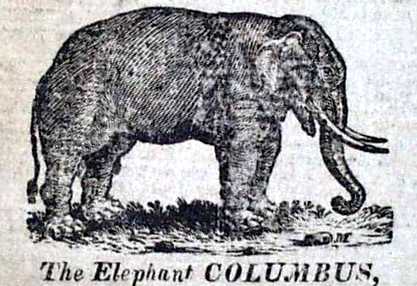 The elephant Columbus, which had its show biz start in Boston. From the Boston Columbian Centinel, December 13, 1817.

In fact, an elephant named Columbus threw his keeper down rather viciously here on December 24, 1847. The man’s crushed leg had to be amputated and he died a few days later. It was feared that the elephant, which was smashing cages and killing other animals, would escape the circus building, for “he tore up and broke all the seats in the ring that came within his reach with as much ease as if they had been merely pipe stems.” The mayor of Philadelphia arrived on the scene and provided two six-pound cannons capable of destroying the animal. These were pointed at the building’s front and rear doors on Walnut and Sansom Streets. Fortunately, Columbus managed to calm down before they were used.

A larger circus, known as Welch’s National Amphitheatre and Circus, was establish there in December, 1853. It offered performances by John J. Nathans, an esteemed Philadelphia equestrian whose most dazzling feat was that of riding four horses simultaneously.

Following this, the site embarked on its long and tortured history as a playhouse. Like so many Victorian age theaters, the place burned to the ground—not once, not twice, not even three times. The structure caught fire four times in the second half of the nineteenth century, and most of these episodes were accompanied by a number of grisly fatalities. 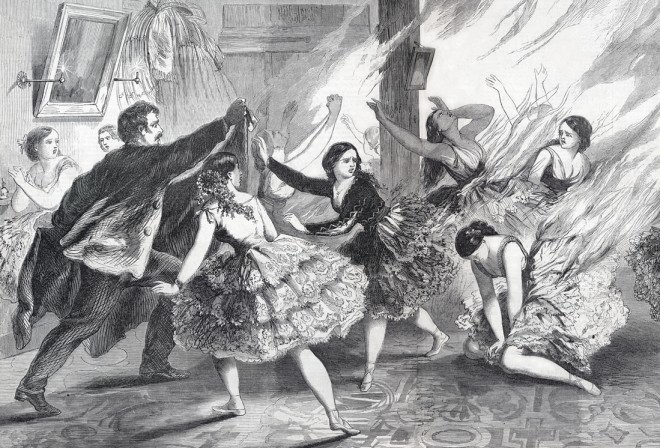 Engraving of ballerinas (perhaps the Gale sisters) and the 1861 fire at the Continental Theatre, from Frank Leslie’s Illustrated Newspaper, September 28, 1861, accessed at the Civil War Research Engine at Dickinson College.

The first fire happened on September 14, 1861, when the old circus building operated as the Continental Theatre. At least six but as many as nine ballerinas burned to death. Four of them were the celebrated Gale sisters, who made up a famous family of performers from England. Known for their beauty and talent, they were all under age 23 and had toured the country before first performing in Philadelphia at the Academy of Music.

About 1,500 people were taking in Shakespeare’s play The Tempest. It was a complicated production, with pyrotechnics and other special effects. Everything was fine until the end of the first act when a dancer, Zelia Gale, suddenly ran past the stage, her costume in flames. The flammable gauze clothing had ignited from a gas jet in her dressing room. When her sisters and some other dancers surrounded her, the fire spread to them and the teenagers screamed in agony as their skin-tight leggings combusted and scorched their flesh off. After jumping from second story windows, their burned bodies lay on Sansom Street (then George Street). Those who made it to local hospitals suffered terribly, crying out for water before they died, one by one, all while in full command of their faculties.

Meanwhile, the proprietor, a former actor named William Wheatley, calmly told the audience to vacate the playhouse. Although this did cause a general panic, no theatergoer perished that evening. The place burned down completely.

A coroner’s inquest exonerated William Wheatley from any blame for the inferno. He, at least, saw to the erection of a memorial at Mount Moriah Cemetery on behalf of the Gale sisters. Wheatley had also held funerals for some the victims at his residence at 819 North Ninth Street. Many clamored to get into the house to see the young victims. With the streets lined with mourners, a long train of carriages wound its way through the city as they bore the dead to Mount Moriah. The heartrending calamity added to the city’s gloomy atmosphere during the first year of the Civil War.

Wheatley’s Continental Theatre reopened to the public in 1865 as the American Variety Theater, a.k.a. Fox’s New American Theatre. On June 19, 1867, the place was the scene of a conflagration that was considered among the worst in Philadelphia’s history until that time.

The Black Crook was being performed one night when fire broke out in the second story hay loft of a stable connected to the theater on Sansom Street, a few doors above Eighth. Some twenty or thirty young ballet dancers were onstage and, for a while, they were not told that the rear portion of the theater was on fire. It was written, “the entire neighborhood for squares around was illuminated” as “thick columns of smoke and flame shot upward to the distance of several hundred feet.”

Luckily, the 1867 group of ballerinas made it out safely and the audience was warned in time to leave the building. But, the front wall collapsed the onto volunteer firemen and others working along Walnut Street. As many as thirteen were crushed to death; at least four of them fire-fighters. The American Theatre was a complete loss.

The place was then rebuilt as the Grand Central Theatre (or just the Central Theatre) and suffered another major fire on March 24, 1888, a Saturday morning. No loss of life was reported, but the theater was, yet again, reduced to ashes. Plus, the stores and restaurants that faced Eighth Street from Walnut to Sansom were, once more, gutted.

More sorrow was to come. On April 27, 1892, the yet-again-rebuilt Central Theatre was destroyed in a huge blaze that also devastated the adjoining Times newspaper office on Sansom Street, as well as the shops and eateries on Eight Street. This inferno, one of the most serious in Philadelphia history, made national news and was announced even in London.

Several choral singers and ballet dancers were among the seventy or so performers waiting in the wings for the evening presentation of The Devil’s Auction. Stagehands were lowering a portion of scenery when it contacted a gas fixture on the stage’s border lights. In an instant, the flimsy canvas—covered with flammable scenery paint and grease—was a mass of flames. Most of the Grand Central Theatre was engulfed within three minutes as blazing scenery fell to the stage and fire shot up to the roof. At the same time, the scenery paint and grease created a dense fog of stifling smoke.

Audience members of that era knew the dangers inherent in a theater fire, and probably knew of the fateful history of that particular playhouse. Their terrified exodus caused a stampede in which many were trampled underfoot. Those who lost their lives had ascended a stairwell that was one of two that led to doors in back of the theater, but unfortunately led directly to the fire itself. Confused when they found their escape route cut off, they were then overcome with fumes and died on the staircase. In a fit of hysteria, one man even forced his way out by slashing others with a bowie knife he had with him. At least a half dozen of his victims were later treated at nearby Jefferson and Pennsylvania hospitals.

The number of dead reported from this fire varied widely. In London, it was said that one hundred people died, but this must have been an early prediction. For sure, at least seven audience members—mostly male teenagers, probably there to see the ballerinas and chorus girls—were known to have died, and six performers were found beneath the theater’s fallen walls. One heroic player, Thomas Lorella, met his end when he reentered the backstage area to look for his ballerina wife after he had already escaped. Flora Lorella died in the inferno as well.

About fifty others were also hospitalized, suffering from excruciating burns and smoke inhalation. Some lost their eyesight, as their burns were mostly on the face. Many actors broke limbs when they jumped to the street from their dressing room windows onto Sansom Street, as the ballet dancers of 1861 had done. 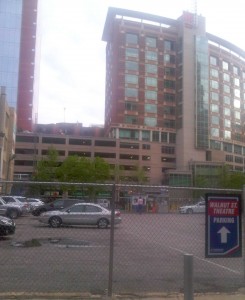 The property loss amounted to nearly $1,000,000 (a considerable sum back then), including the loss of an adjacent eight-story annex occupied by the Times. Part of this annex collapsed onto the powerhouse of the Philadelphia Traction Company along Sansom Street; this structure may very well be the building that is still there. Only the front wall of the Central Theatre remained standing, though it was pulled down later to allow for the recovery of bodies.

In what must have seemed like a recurring nightmare to the store owners and restaurant owners on 8th Street, the blaze extended to those buildings before it could be controlled. Much of the entire block was destroyed, except for the Walnut Street Theater. The conflagration even skipped over Sansom Street, damaging properties on the north side of the street. The famous Continental Hotel at Ninth and Chestnut—on the site of the today’s Franklin Residences (formerly the Benjamin Franklin Hotel/House)—was singed.

The theater’s proprietor, William J. Gilmore, had managed several playhouses in Philadelphia by that period, and was well-respected in the theater business across the nation. He received sympathetic telegrams from theatrical managers all over the country, and the Academy of Music offered him the use of that theater to stage a benefit for himself and the company. Gilmore declined the offer on his own behalf, yet accepted it for the house itself. 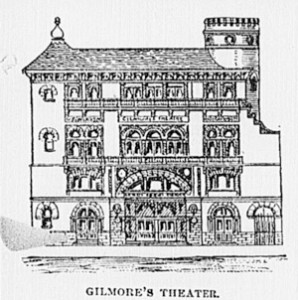 Gilmore’s Theater, the fifth and final playhouse at 807 Walnut | Image via The Roanoke Times, February 1893

The house was immediately reconstructed as Gilmore’s Auditorium. It opened on August 26, 1893, with architect John D. Allen setting it back five feet from the old building line and placing a turret on the roof in front. (Allen designed or altered theaters in Philadelphia, Pittsburgh, Baltimore, Brooklyn, and New York City.) Gilmore’s Theater was advertised as “Absolutely Fireproof” and “the safest and probably the best built theatre in this country.” Perhaps it was absolutely fireproof, for the building did not burn again.

Gilmore’s became the Casino Theatre in 1905 and quickly gained the reputation as Philadelphia’s most popular burlesque house. The place was demolished in 1935. Since then, 807 Walnut Street has been a lowly parking lot.

It’s true that so many Philadelphia theaters of the Victorian era are gone, obliterated by the march of time, progress, whatever. Yet in this case, the saddest thing is not that a parking lot has replaced an old theater. It’s that there is no marker of any sort dedicated to the memory of all the victims—ballerinas, teenagers, firemen, not to mention an elephant keeper—who burned to death or otherwise died as a result of tragic incidents that occurred at this spot.